Between 2017 and the end of 2022, Javier Celaya says, the field of Spanish-language audio providers has grown from 15 to more than 60. 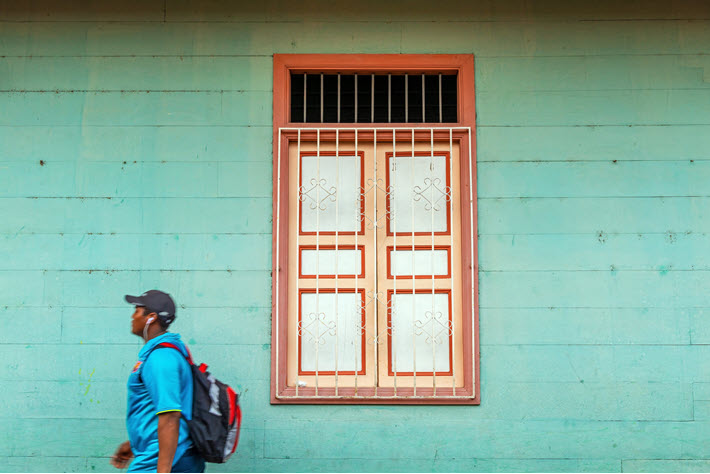 In 2017, he tells Publishing Perspectives, there were fewer than 15 audio channels in the Spanish-language markets, which include Spain, Latin American nations, and the Hispanic population of the United States. In under five years, Celaya says, that number of channels has ballooned to more than 60, as the world’s most aggressive and well-heeled audio subscription services have opened services to lure customers in these markets.

Citing a PricewaterhouseCoopers study, Celaya says the industry is anticipated “to reach 26.6 million listeners in 2026, generating an income of €590 million (US$632 million) in the Spanish markets through advertising, branded content, income derived from subscriptions, and more.

Not the least of the attractions for subscriber-hungry audio vendors, of course, is the geographical reach of the Spanish markets: Europe as well as the Americas. 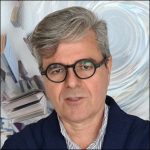 “In my view,” Celaya says, “the fast-forward audio growth that we’ve experienced in the Spanish markets is a consequence of three main factors.” He sees these factors as competition in these markets among major audio subscription players; investments by key publishers in Spanish-language content; and a “subscription culture” driven by streaming services both in television and in music.

That last point, a “subscription culture,” of course, is something our readers know from our Publishing Perspectives Forum Executive Talk in October at Frankfurter Buchmesse with HarperCollins UK CEO Charlie Redmayne. Redmayne’s point is that a subscription is frequently perceived as being more valuable than it is by consumers who believe they utilize it more than they actually do.

Celaya cites the arrivals in the Spanish-language markets of “the main international platforms” as the first factor, nourished by offers of unlimited-listening subscription services highly competitive pricing from €3.99 to €9.99 per month (US$4.28 to $10.71). It’s a listener’s market.

One result of the clamorous competition has been—and has driven—a burgeoning catalogue of Spanish-language audiobook content.

“The Spanish audiobook catalogue of more than 20,000 titles that we now enjoy is a result of two intense parallel production processes,” Celaya says. “During the last five years, leading publishers have heavily invested in the production of new Spanish audiobook titles:

“Parallel to this publishing audio sprint,” he says, “the leading platforms—Audible, Storytel, Podimo, and so on—have also produced their own exclusive audiobook and podcast catalogs reaching another 8,000 and more exclusive titles.” In fact, Celaya says, around one-third of the total offering is exclusive content. Podcasts in the Spanish language, he says, now number more than 100,000. 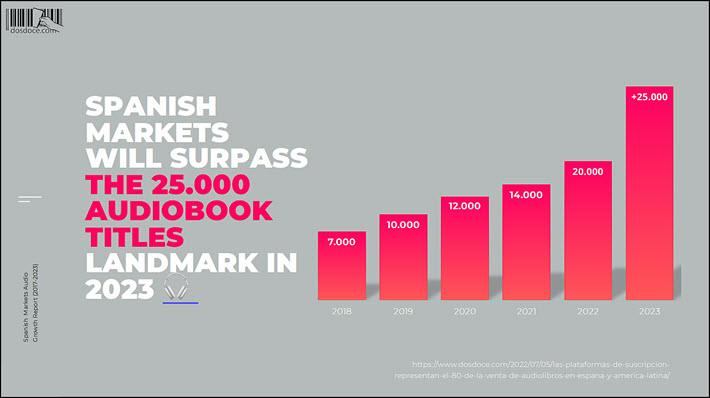 WorldData’s information indicates that approximately 454.6 million people today speak Spanish as their mother tongue. Spanish is designated an official language in at least 21 nations and is estimated to be spoken in another 13 countries, as well. Español has its largest single population in Mexico, with more than 116.7 million Spanish speakers.

Publishing Perspectives readers will recall our recent story on Niclas Sandin’s offers through BookBeat of tiered subscriber levels, in which consumers select their likely frequency of usage—a light user, a medium user, a heavy user. They’re then charged according to that selection of a tier:

Sandin is honest enough to point out that this is, in part, a survival technique in a subscription field in which especially committed fans of one or another genre can upend a service’s ability to pay publishers who license their content to a platform. He’s testing it out now in at least 17 of BookBeat’s 13 markets.

Celaya refers to such models as inducing various “frictions” to user access. “In 2023,” Celaya predicts, “we will see new subscription models with different ‘frictions,’ which some people misunderstand as ‘the end of unlimited subscription,’ but in my view is the natural evolution of the streaming industry to be able to reach new audiences and new markets.

“Subscription will continue to be the dominant business model in the Spanish markets. More than 80 percent of audio income is derived today from streaming platforms,” in these markets, he says.

“But audio platforms will become smarter,” he says, “offering different subscription models and rates to meet the demands of each user’s content consumption. In this scenario, some platforms will test adding advertising to their service offerings,” as some of the television and film streaming services are doing, “to be able to launch a service at a very competitive price, below €4.99, to ensure that no one is left out of the service for financial reasons” and, of course, to generate more income and swell subscriber bases.

“Other platforms will limit access by establishing a certain number of hours per month,” he says, “during which a user can access the service.

“Other platforms will test limiting the amount of content to which they have access per month, creating book-club type services,” similar to what Sandin and his team at BookBeat are piloting.

“We’ll also see in 2023 more dynamic subscription pricing,” he says, with streaming services basing pricing on each user’s history of activity on a platform. 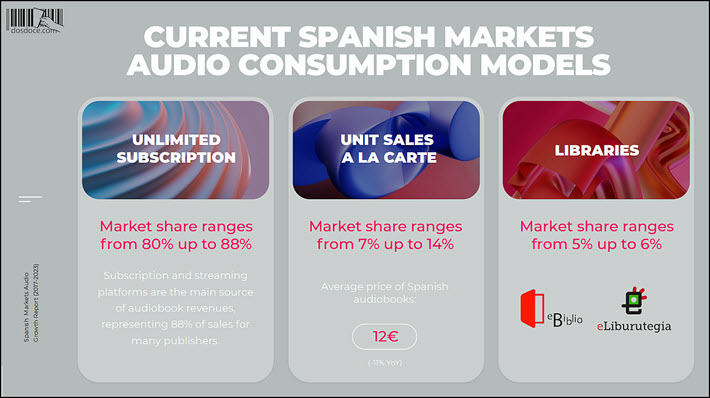 Outlook: At This Point, and Beyond

Several more top-line points Celaya has to offer are well worth attention, especially as publishers in world markets study their next moves in audio.

Bringing up one of the more controversial elements of the audio industry at this point in its development, Celaya also points to “great advances in the evolution of the quality of synthetic voices in Spanish” which increasingly can resemble content read by a narrator. As Publishing Perspectives has been reporting, production platforms—such as Speechki and Bookwire’s offerings—can offer publishers far more cost-effective production of content in audio, which in some cases enables whole backlist catalogues to be considered for audio, as an example.

The controversy, of course, is whether professional readers of audio—narrators, as they’re called—will lose business because machine-generated voices are quickly and inexpensively pumping out audio renditions of books’ texts.

Industry specialists, including Celaya, say the work being rendered in audio formats by sampled-and-manipulated voices is not work that publishers could afford to pay narrators to record in any case, thus it’s work that never could have been made available to those narrators. As in so many of the more emotionally charged debates in the publishing industry, however, some in the narrator corps say they doubt this rationale and are dismayed to see automation moving in on what was for years the province of human readers in tracking booths.

For them, Celaya holds out one ray of hope: “It’s very possible that in the future we’ll see a message on audiobook titles and subscription platforms indicating Recorded By a Human Narrator, to highlight its value.” 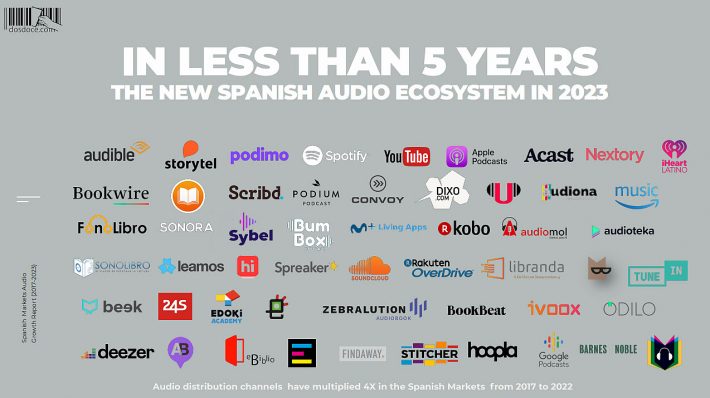