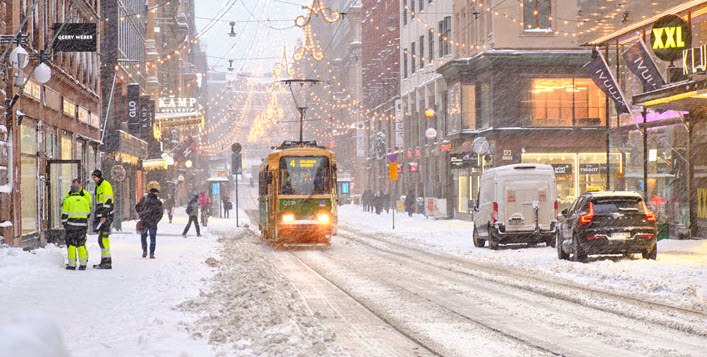 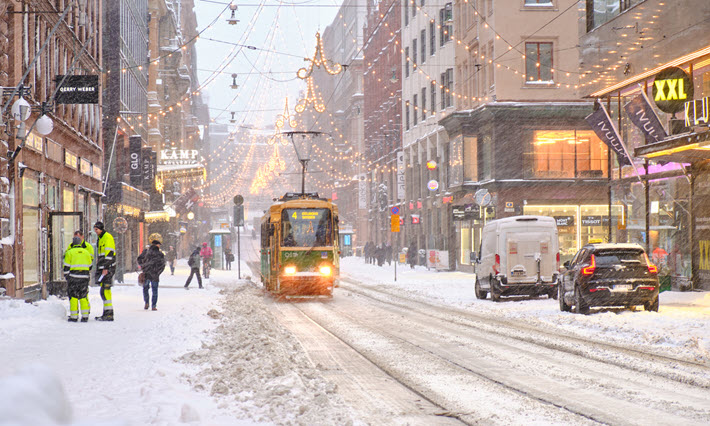 On Helsinki’s Aleksanterinkatu, a street at the city center, in January 2021, the year for which FILI has its latest figures on Finland’s success in international rights sales. Image – Getty iStockphoto: Lev Karavanov

As we open a new year of Rights Roundups, there’s good news from FILI, the Finnish Literature Exchange directed by Tiia Strandén.

In 2021, the organization reports “Finnish literary exports grew by 4 percent. This can be considered a true victory during a pandemic year. Revenue from literary exports reached nearly €3.7 million euros last year [US$4.01 million].”

According to a report commissioned by FILI, translation rights to Finnish literature were sold to more than 40 different countries last year, we’re told.

Children’s and young-adult (YA) literature were in the lead in translation contracts, at 61 percent of the deals. In revenue, this meant that “almost half the export revenue” came from the same category of young people’s content. Fiction followed, as the next category, in number of deals and revenue generated. Contracts were made in: 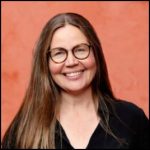 As that list indicates, the biggest buyers, FILI reports, were in the English-language markets. “That the English-speaking market is a growing share of Finnish literary exports,” Strandén says, “can be considered a major accomplishment, as this market is highly competitive. Gaining a foothold in England and the United States has required determined, long-term investment.“

As many of our readers know, Finland was Frankfurter Buchmesse‘s guest of honor in 2014, and FILI has led a determined effort to sustain the energy the market experienced around that event and in its aftermath.

All the work, Strandén says, has resulted in what appears to be a lasting positive effect. “Finland’s literary exports have clearly reached a permanently higher level,” she says.

“We’re especially pleased that the pandemic has not stopped growth, even though trade events such as book fairs were cancelled, and bookstores were closed in many countries. Interest in Finnish literature is strong, and we have professional literary agencies and excellent literature. This is a good foundation for setting new, ambitious goals for the coming years.” 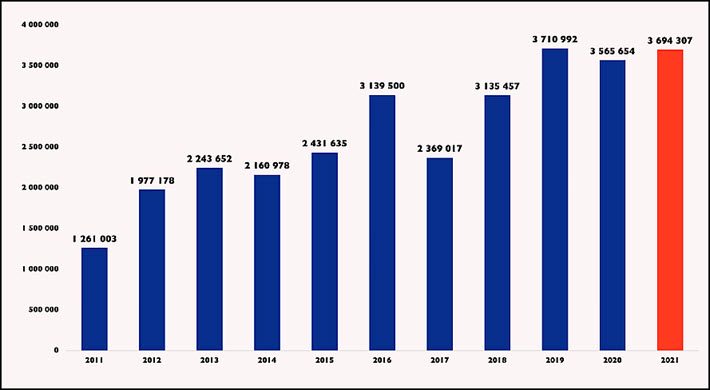 International rights sales of Finnish literature over time. As you can see, the only year’s tally topping 2021 since 2011 was a strong showing in 2019. Image: FILI

For a look at translation and publication grants FILI awarded in its autumn 2022 cycle for Finnish, Finland-Swedish, and Samí literature translations into international languages and territories, see the list here. The first round of applications for 2023 translation funding has opened, and the deadline for applications is February 1. FILI’s application guide is here.

And in honor of this upbeat report, we’ll start with a  busily selling work originally written in Finnish, from the Finnish-Icelandic author Satu Rämö.

As in each roundup, we use some of the sales copy supplied to us by agents and rights directors, editing that copy to give you an idea about a book’s nature and tone, but limiting the promotional elements. If you’d like to submit a deal to Publishing Perspectives, see the instructions at the end of this article. 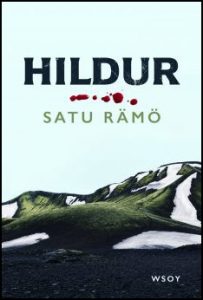 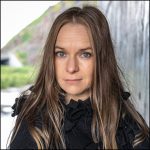 “Set in the Westfjords of Iceland, Hildur follows Hildur Rúnarsdóttir of the Ísafjörður police and her Finnish trainee officer, Jakob Johanson, in investigating a strange tangle of crimes as the fog obscuring secrets that have been in the dark for decades gradually begins to lift.

“Blending Finnish and Icelandic sensibilities, Hildur launches a refreshing voice in the Nordic crime-fiction tradition [with similarities to the work of] Ragnar Jónasson, Maria Adolfsson, and Arnaldur Indriðason.”

The book, described as “Nordic noir with a pinch of folkloric mysticism,” won the BookBeat Award for author Satu Rämö as Newcomer of the Year. The second book in this three-book series, Rósa & Björk, is anticipated for release from WSOY in March, with the third book in the series set for December. 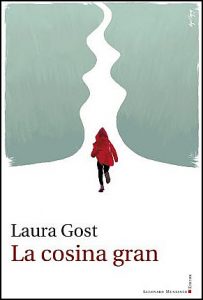 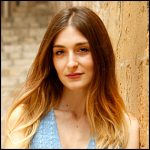 “A coming of age story set against a Mediterranean backdrop about a love triangle that shakes the relationship between cousins Rosa and Tina.

“Rosa is only 12 years old when her older cousin is orphaned. She soon finds that Tina represents everything she refuses to tolerate; she is an irresponsible and troublesome girl. But, little by little, Rosa will begin to realize that behind the things that repel her hide something that she longs for herself.”

A native of Mallorca, Gost is a writer and screenwriter who in 2018 received the Goya Award for Best Animated Short Film with Woody & Woody, for which she was both the creator and scriptwriter. She was the winner of the V Dramaturgy Tournament in the Balearic Islands for her work Seguí (2019) and of the Temporada Alta Festival’s IX Catalan Dramaturgy Tournament for Matar el pare (2020). With La deliberació dels escorpins (Lleonard Muntaner Ed., 2021), she won the 2021 Pare Colom de Teatre prize.” 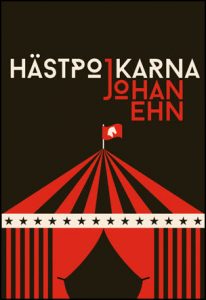 The Horse Boys
By Johan Ehn 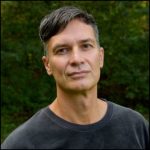 In 1920, “Sasha and Janek are growing up at an orphanage in then-Czechoslovakia.

“They become the Golden Brothers and perform the most astonishing acts on horseback. They are also sexually attracted to each other. As their circus visits Berlin, they feel that they’ve found their home. But in January 1933, everything ends when the Nazis come to power.

“In the present day, Anton is a 19-year-old gay man in Stockholm in working in home care. He visits Alexander ‘Sasha’ Kovacs, an old silent man. In a wordless language, Anton starts to uncover the old man’s story. 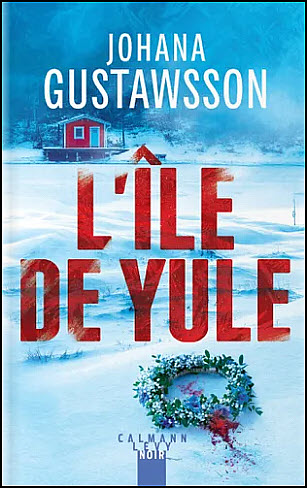 “Storholmen Island in Sweden is home to the Gussman Manor and its priceless collection, for which Emma is coming to do an inventory. 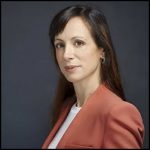 “This island is also the place of unexplained deaths. The island and its mansion have had a dark reputation since, nine years earlier, a teenage girl was discovered hanging from a tree on the estate, killed in horrific conditions.

“Emma quickly realizes that her work will take her months, alone in these huge rooms where she never meets anyone because the Gussmans have expressly refused to see her and impose strict schedules on her. Although she’s not impressionable, the atmosphere here makes her blood run cold.

“When a new young girl is discovered, dead, in the frozen sea, everything suggests that she has been the victim of the same killer.” 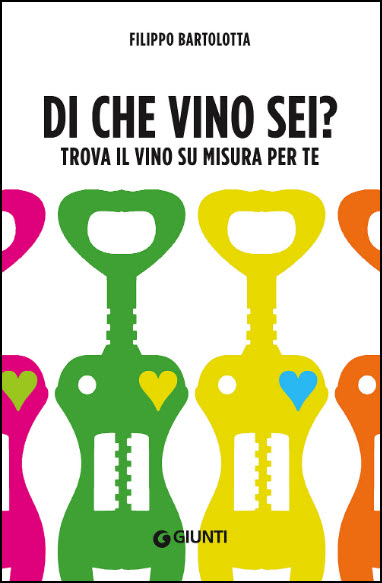 What Wine Are You From?
(Di che vino sei?)
By Filippo Bartolotta

“The right bottle is the right one for you: it’s almost like an outfit tailor-made for you. 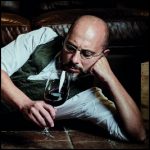 “Each wine–whether it’s a Nobile, a Pinot Noir, a Verdicchio, or Malvasia–either fits you or it does not. And each wine will affect your mood, your emotions, and your sensations differently.

“Filippo Bartolotta guides us through Italian and international wines, using Jungian archetypes such as the Sage, the Rebel, the Outlaw, the Lover and the Hero.

“Based on your profile, in fact, you may prefer a wine that reflects the generosity and sense of nourishment of the Guardian Angel or the strength and resilience of the Warrior or the inexhaustible desire to know and learn of the Sage.” 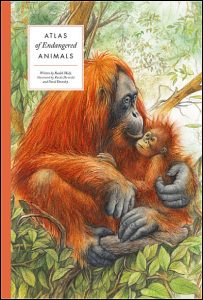 By Radek Malý
Illustrated by Pavla Dvorská and Pavel Dvorský

“This book provides both a wake-up call and hope. If we behave responsibly toward nature, these species can still be saved.

“We are born, we live, we die, and we loot our planet. We pollute it, mine it, cut down forests, and transform them into arable land. We pump out groundwater as well as raw materials . . . Entire lines of threatened species, however, are dying before our eyes. Do we want to continue like this? x

“Atlas of Endangered Animals maps out the dangers that specific threatened species face. The writer Radek Malý encourages people to think about their actions. The atlas is accompanied by full-page illustrations by Pavel Dvorský, supplemented by scientific illustrations from Pavla Dvorská. These are stories of 40 species the ongoing existence of which rests in our hands.”

Do you have rights deals to report? Agents and publishing-house rights directors can use our rights deal submission form to send us the information we need. If you have questions, please send them to Porter@PublishingPerspectives.com

More from us on the still-ongoing coronavirus COVID-19 pandemic and its impact on international book publishing–a factor in our introduction on Finland’s international rights performance–is here.