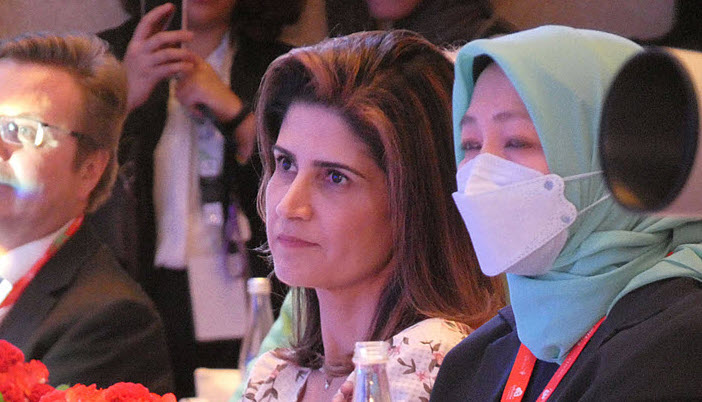 The complexity of the International Publishers Association’s service leads Karine Pansa to call for more and better market data. 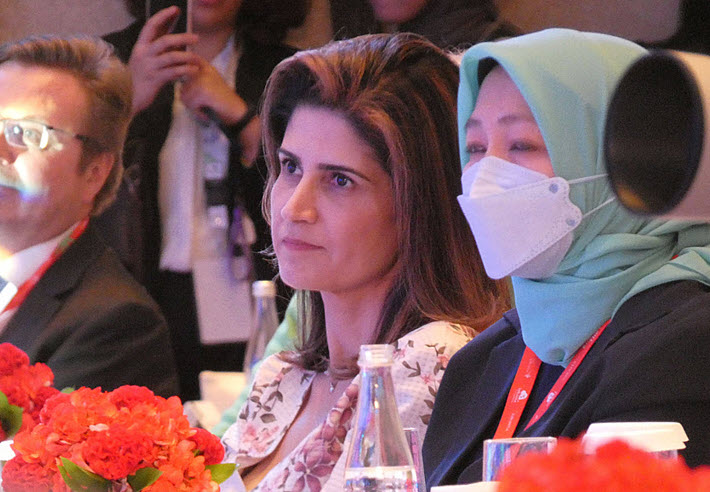 Earlier this week, we published our interview with the United Arab Emirates’ Bodour Al Qasimi, who has just concluded her term in office as president of the International Publishers Association (IPA).

Today (January 6), we have our opening interview with Brazil’s Karine Pansa, who has served for the past two years as vice-president and this week has become the organization’s new top elected officer. Pansa’s vice-president is Gvantsa Jobava of the Republic of Georgia.

With the arrival of the new year, Pansa has become the third female IPA president in the organization’s 125-year history. The first, Argentina’s Ana Maria Cabanellas, led the organization as president between 2004 and 2008, and Al Qasimi, of course, was the second. If all goes as expected, Jobava will become the fourth female president of the IPA in 2024, following Pansa’s term of office.

“When I first started as an executive committee member, I began telling people what IPA was doing. And it was not all that clear for everyone why IPA is so important to the world market.”Karine Pansa, IPA president

Pansa now is part of series of IPA presidents whose singular commitment and personal engagement in the presidency has for almost a decade steadily raised the international profile both of the association and of its leadership. In addition to Qasimi, they include Publishing Perspectives columnist and Mensch Publishing founder Richard Charkin; Elsevier senior vice-president, Workplace Pride co-chair, and IPA inclusivity chair Michiel Kolman; and Hugo Setzer, now president of the Mexican Publishers Association, the Cámara Nacional de la Industria Editorial Mexicana (CANIEM).

In looking ahead to her two-year tenure as president, Karine Gonçalves Pansa brings more than 20 years of publishing experience to the job, as editorial director with Girassol Brasil, a children’s and young-adult publishing house established at the turn of this century. This presents an interesting parallel in her presidency and the one before it: Both she and Al Qasimi are children’s publishers, Al Qasimi with the Kalimat Group in the emirate Sharjah.

There may be a special advantage to both their backgrounds as seasoned executives in the multilayered demands of young readers’ publishing, and that’s where Pansa starts in our exchange.

‘IPA Needs To Be Sustainable’ 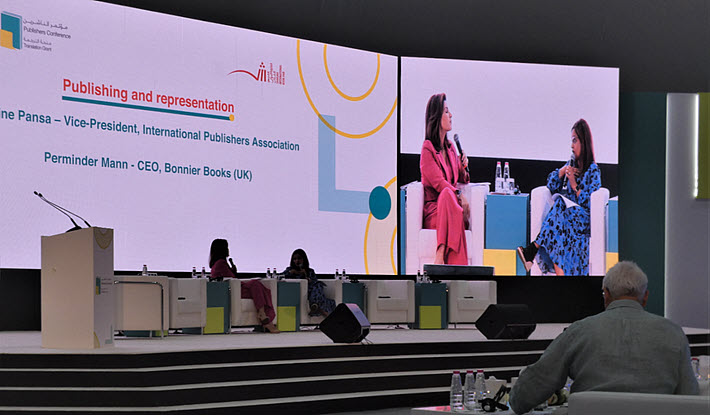 “I can see that two years is the perfect timing” for a term in office, Pansa says, “in that you can focus on something special. It makes a difference. Every two years, you have something new, a focus on a subject” close to the interests and experience of a given president. The problem? Choosing that “something special” in such a deeply nuanced business.

“The thing raising the bar, setting it higher, is that publishing has more and more issues, more subjects that are important.”Karine Pansa, IPA president

“The thing raising the bar, setting it higher,” she says, “is that publishing has more and more issues, more subjects that are important. A while ago, copyright and freedom to publish were called the ‘two main pillars'” of the organization’s activities. “But now, there are other subjects that are really important to the worldwide market, such as accessibility, such as sustainability, such as diversity. We just keep encountering and adding new needs, which gives us more to do.”

She’s quite correct. The organization’s emphasis on the essential issues of copyright and freedom of expression and publication now are flanked by demanding concerns not only in the areas she mentions but also in digital acceleration, a key dynamic in the still-ongoing coronavirus COVID-19 pandemic; government policy, which impacts publishing in many parts of the world; and a recent focus on the need for multinational unity in publishing—the advantages of coordinated, cross-border cooperation in a globalized world and marketplace.

It was the question that involves each market’s stage of development in digital publishing and retail, in fact, that prompted the IPA to open its IPA Academy in March 2022 in cooperation with Ahmed Al Ameri‘s  Sharjah Book Authority; New York University’s (NYU) School of Professional Studies’ Center for Publishing in the States; Oxford Brookes University at the Headington Campus in Oxford; and the charity Publishing Training Centre based in London. One thing the pandemic had surfaced was a severe need in some markets for digital know-how, when physical sales points for books were locked down.

A round of strategic review for the organization also led to the development of its “Inspire” program intended to “lay down a roadmap for book publishing’s resilient future.” And to get a look at just what Pansa means when she talks about a sense of quickly multiplying focal points, the Inspire Charter outlines 10 interests:

As complicated as the field of publishing’s well-being and advocacy may seem to have become, however, Pansa says that this panoply of needs actually has helped communicate the work of IPA precisely because it touches on more challenges in the far-flung reaches of the industry.

“When I first started as an executive committee member,” she says, “I began telling people what IPA was doing. And it was not all that clear for everyone why IPA is so important to the world market.”

With more clarity has come a chance to assess the world industry’s demands and needs and their relative urgency ahead. And Pansa has used the 2022 annual report of the organization, led by IPA secretary-general José Borghino and communications and freedom to publish lead James Taylor, as a kind of index to the potential emphases and factors her presidency will highlight. “I’m looking at everything that IPA has done,” she says, “and we need to choose what are the best subjects to visit” and how to best utilize IPA’s resources going forward.

“We’re very careful with our resources,” Pansa says, “because we need to be sustainable for a long period of time” to serve the needs of an international industry the needs of which seem to have ballooned along with those of so many entertainment and educational media. 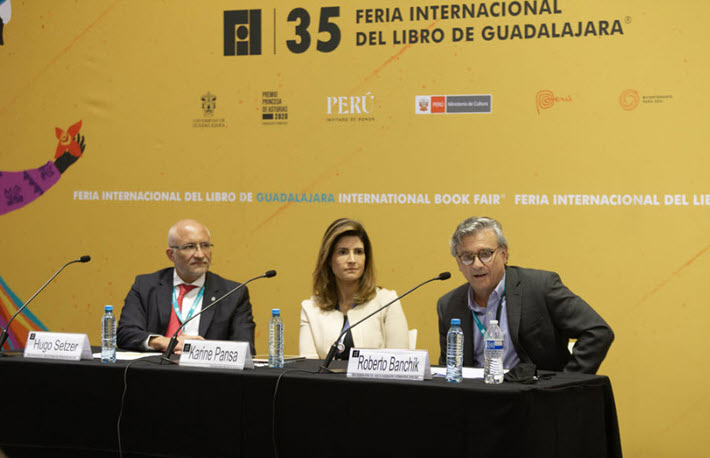 Where Pansa is likely to put her main emphasis has a lot to do, in fact, with the assessment she’s made of the work of this busy organization in so complex a field as book publishing.

“We have to talk about these difficulties in getting data together to compare–to see if we can help people realize that they should at least try to do similar studies that can be compared.”Karine Pansa, IPA president

“I do believe that our market our global market needs more information,” she says, “needs more data. We need reliable data. And there are some markets where you just cannot find reliable data.

“So my plan is to keep talking about data, keep reminding people how important it is, keep telling them what the advantages of having reliable data are, so you can pursue your objectives, so you can talk to government and show them how important your market is, how important what you’re asking from them is.”

Despite many obvious commonalities, the international book publishing industry is a business rife with distinctions, myriad shadings and gradations of mission and purpose, security and vulnerability, market support and struggle. Pansa’s detection of this—and her conviction that a business that can better assess itself can better help itself—clearly run deep.

“Of course, we keep our two major pillars of copyright and the freedom to publish,” she says. “We cannot survive without them. But even to support those objectives, you need to understand the market better, and data is the way of doing this.”

With this emphasis on data, Pansa also recognizes the need for coordinated collection and categorization of data, for market-to-market coherence.

For example, she says, “I can compare data from Brazil and Colombia. But I’m not able to compare it with Mexico’s data because the way the data is collected and expressed is different. The same thing when I get data from the United States or the United Kingdom. I cannot even think of comparing that with data from India.

“We have to talk about these difficulties in getting data together to compare–to see if we can help people realize that they should at least try to do similar studies that can be compared” for more comprehension and accurate analysis of the world publishing marketplace as a whole. 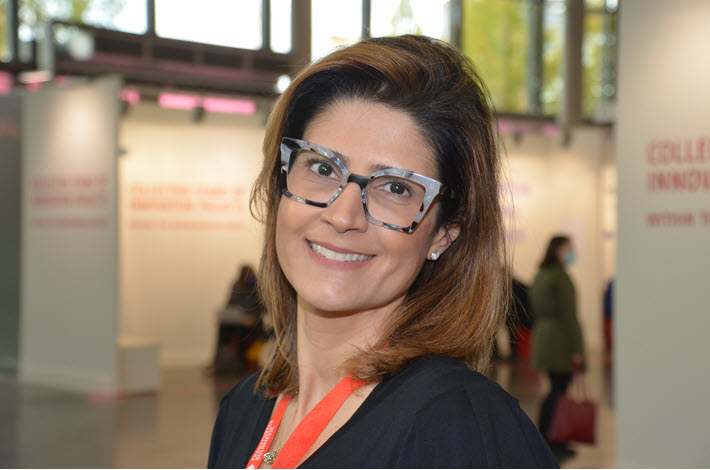 Pansa says she also feels the urgency of the industry’s need to embrace issues of sustainability on a fragile Earth.

“Diversity is not only about women in publishing, but also about feeling represented, yourself. Your way of thinking, the type of books that you want to do. It’s ‘diversity’ in a broader way of looking.”Karine Pansa, IPA president

“Sustainability is very much in our hearts,” she says, “because we understand the importance, the real importance of a sustainable industry in the future. But in some markets, we also know that people are not looking seriously into this yet. They’re not focusing on efforts in sustainability at the moment. So we also need to talk about this, in all developing countries, in all markets where this is not the first thing they’re talking about.

“If you look at Brazil, everyone knows about the SDGs,” the United Nations’ Sustainable Development Goals. “People know the importance of sustainable paper production, about the difficult parts of the shipping industry, they’re aware of that. But they’re not yet prepared to pay more to help the planet. I feel a complete gap between developed countries and still-developing nations. The way that we discuss this matters, and it’s different in different regions.”

Pansa says she also feels strongly about the importance of accessibility, producing literature that can be accessed by those with reading disabilities, and the “born accessible” approach in publishing that she spoke about at the Guadalajara International Book Fair in November.

She mentions diversity, but quickly clarifies that she’s not just thinking about gender diversity. “It’s not only about women in publishing,” she says, “but it’s also about feeling represented, yourself. Your way of thinking, the type of books that you want to do. It’s ‘diversity’ in a broader way of looking.”

Pansa, in our interview, has, in fact, walked right into that plethora of needs that the IPA is addressing. And if anything, that matches what she sees as a through line in so many of the issues she feels are important. As it turns out, diversity is the right term for that, too. Karine Pansa, like the IPA presidents before her, has a richly complex two-year term ahead of her.

“There are different issues when we talk about developed countries and about developing nations,” she says. “And it looks like it’s easy to handle this, but it’s not that easy, because sometimes you can miss something. And so this is something that worries me, that makes me ask how we can do better to cover different aspects of this whole world of publishing, which is very diverse.”