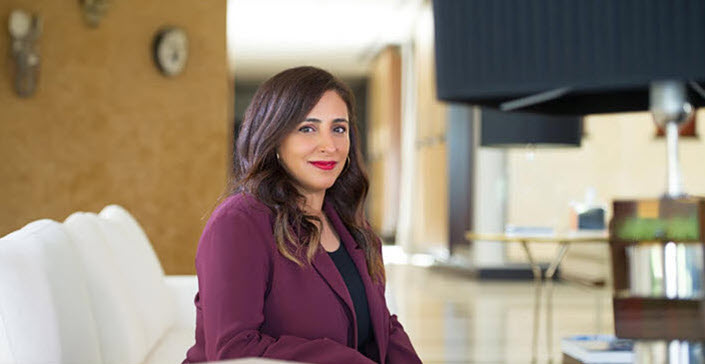 As she completes her term as president of the International Publishers Association, Bodour Al Qasimi speaks about the experience. 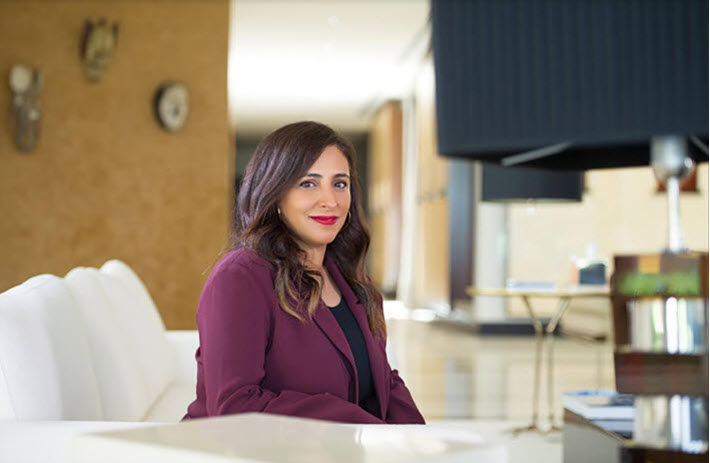 ‘Still a Lot of Room for Awareness’

The presidency of the International Publishers Association (IPA) rolls over every two years, and as we begin 2023, the United Arab Emirates’ Bodour Al Qasimi is handing off to Brazil’s Karine Pansa, who has served for the past two years as vice-president. Pansa’s vice-president is Gvantsa Jobava of the Republic of Georgia.

Today (January 3), we have an interview with Al Qasimi, to capture some of her observations and thoughts as she concludes her term in office. This will be followed by an interview with Pansa as she starts her new term of office.

Beyond the issue of gender, however, Al Qasimi’s sheer drive—during two particularly demanding years in the IPA’s work in world publishing—has raised the visibility of the presidency and the prominence of the association itself on the world stage.

“I always believed that IPA should consider the perspectives of all markets, not just a few, when planning industry priorities.”Bodour Al Qasimi

José Borghino, the organization’s secretary-general, and another past president, our columnist Richard Charkin, tell Publishing Perspectives that for three years now, the organization has achieved 100-percent participation in the IPA’s general-assembly votes—a record that ensures that each member-association is fully enfranchised in the organization’s decisions.

This fine level of international engagement may well be occurring now in part because of the zeal and energy that Al Qasimi  and her predecessor, Mexico’s Hugo Setzer, have brought to the presidency and—needless to say—to the extraordinary realities of the still-ongoing coronavirus COVID-19 pandemic, the United Kingdom’s withdrawal from the European Union, economic upheavals, an accelerated digital imperative, Vladimir Putin’s war on Ukraine, and more. It was Al Qasimi, in fact, who at Ahmed Al Ameri‘s 2022 Sharjah Publishers Conference conducted the first onstage interview with Markus Dohle after the then-CEO of Penguin Random House had learned of the court’s decision against PRH’s proposed acquisition of Simon & Schuster.

In an exchange with Al Qasimi at the end of her term, Publishing Perspectives has looked at several key hallmarks of her approach as she departs the office. She came to the presidency a well-established founding publisher of the Kalimat Group; the founder of the Emirates Publishers Association; the lead on Sharjah’s program for the designation of UNESCO’s World Book Capital; and the lead partner in the IPA’s Africa Publishing Innovation Fund, a project with Dubai Cares. During her presidency, in March 2022, she opened the Emirates Reprographic Rights Management Association.

Easily one of the most visible elements of her handling of the IPA position has been her travel schedule, which saw her in personal contact with member-associations and publishing communities in many parts of the world. Taking office in the second year of the pandemic’s pressures made international travel anything but simple, with myriad testing and quarantine protocols imposed by various nations. But the travel, she says, had to do with the international industry’s need to work together. 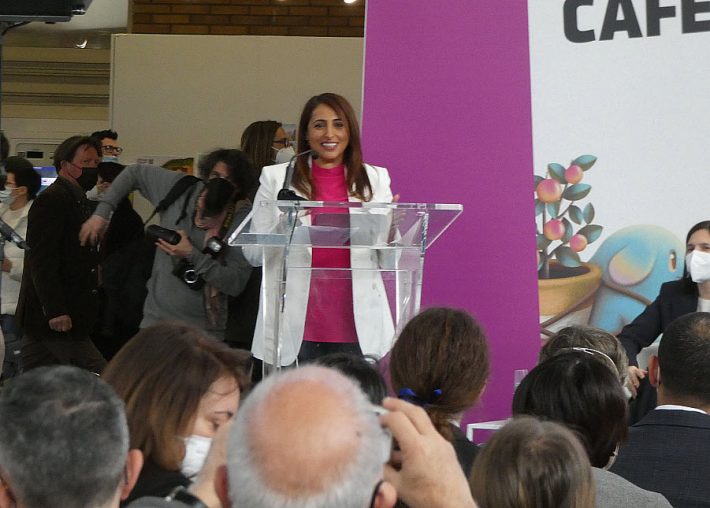 “Solidarity is crucial for the future of the publishing industry,” Al Qasimi says. “Communication is the medium through which we can nurture and strengthen this spirit.

“As it happened, I became IPA president during the global pandemic, a critical moment for our industry and a period when our members most needed our support.”Bodour Al Qasimi

“My plan heading into the presidency was to reach out extensively to our members and across the industry to create more synergy. As it happened, I became IPA president during the global pandemic, a critical moment for our industry and a period when our members most needed our support. So engaging with and listening to our members and partners face-to-face or virtually was critical in reassuring our members, identifying differences, and building common ground for long-term collaboration between all links in the industry.”

Al Qasimi tells us that despite the extraordinary travel schedule she took on, “I wish I could have visited more members.

“It may be a surprise to hear this, given my extensive travels during my tenure, but I can assure you that we always learned something new in every meeting, in every market we went to. We continually discovered new opportunities, which made us understand the true breadth of our industry.”

Al Qasimi’s expansionist goals for the association’s services were clear even before she became president, as she began leading the development of regional conferences–in Nigeria, Kenya, and Jordan. Another had been anticipated for Morocco but plans for that one were waylaid by the pandemic.

“IPA is an international organization,” she says, “and the umbrella organization for many publishing associations worldwide. Therefore I always believed that IPA should consider the perspectives of all markets, not just a few, when planning industry priorities.

“The projected global population growth indicates that a good proportion of our future readers will be in ‘non-traditional’ markets,” she says, “and so it’s important that we focus our attention on supporting the development of publishing in those markets and include their concerns and points of view in global industry conversations.” 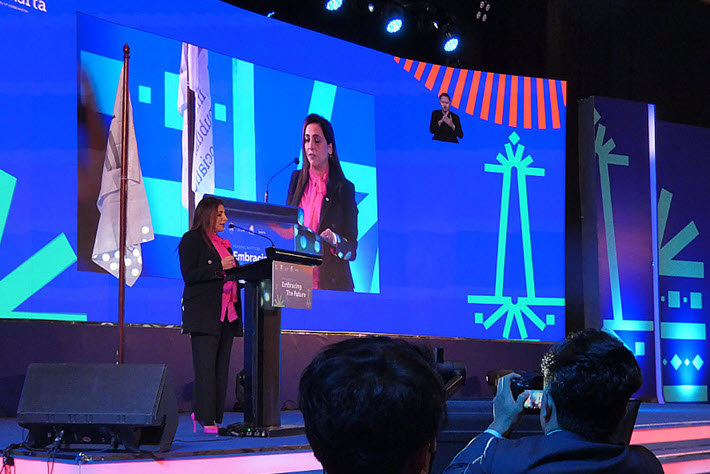 In a late-2022 appearance at the 36th Guadalajara International Book Fair, Al Qasimi—who in 2019 founded the international network for women in publishing, PublisHer—told the fair’s director-general Marisol Schulz and their seminar audience that the emphasis in gender relations in publishing needs to be on “equal opportunities for women over equality with men.”

“I want to champion and empower women to enable them to access leadership positions based on their talent and experience, but at the same time I believe it’s in our industry’s best interests that we work closely together as one.”Bodour Al Qasimi

Some may have been surprised at the comment, but her point was one of emphasis and on moving forward as a community rather than in an us-vs.-them construct. “I believe in meritocracy,” she says today, “as much as I believe that the current set-up in publishing’s highest echelons does not favor women’s progress in the industry.

“So my approach has been transparent from the start. I want to champion and empower women to enable them to access leadership positions based on their talent and experience, but at the same time I believe it’s in our industry’s best interests that we work closely together as one. The publishing industry is facing serious challenges, so we need every voice and every fresh perspective to innovate and create growth.”

After so much change, challenge, and accomplishment for IPA during Al Qasimi’s two years in the presidency and her previous two years as vice-president, we wanted to know if she’d seen strengths or weaknesses in the organization that might not have been apparent to her before then.

“I always believed that IPA had a critical role in representing the voice of all publishers worldwide,” she says. “However, after becoming president, I realized there’s still a lot of room for awareness and education about the depth of our diversity as an organization and as a global industry. Our diversity can be a source of strength if everyone is represented, and my background has paved the way for a mindset-shift in IPA and the industry. Hopefully, we’ll see more balance going forward.”

Always a gracious, warm personality, Al Qasimi is a huge favorite among her colleagues at the IPA’s multinational meetings and events, just as she is in the UAE and her home emirate, Sharjah. She has pressed the association’s agenda, often holding jet lag at bay, as many in the news media ran to keep up with her.

Even Al Qasimi, known for her energy, foresight, planning, and dedication to follow-through, has earned a little cordial evasiveness when asked what’s next.

“Right now,” she says, “I want to take a break, process everything from the past two years, and spend some quality time with my family. At this point I don’t have any specific new projects in mind, but I will continue my work as a publisher, and I’m always happy to help the industry in whichever capacity.” 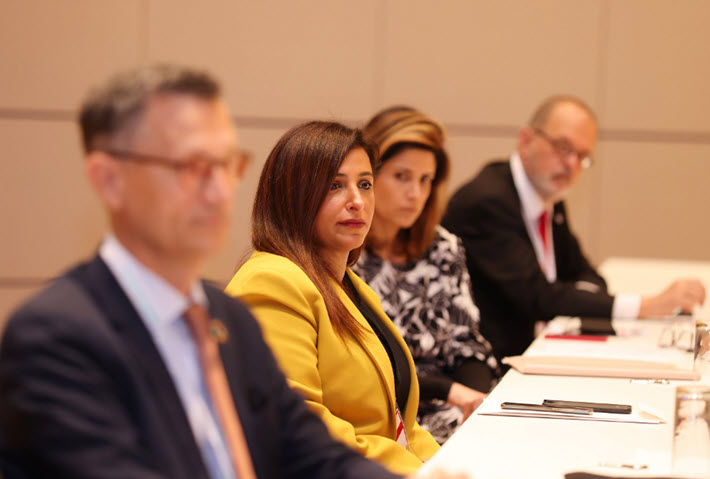