Awaiting news of a buyer, Vivendi’s Editis in Paris continues rolling out new local-focus presses in Québec and Africa, this time in Senegal. 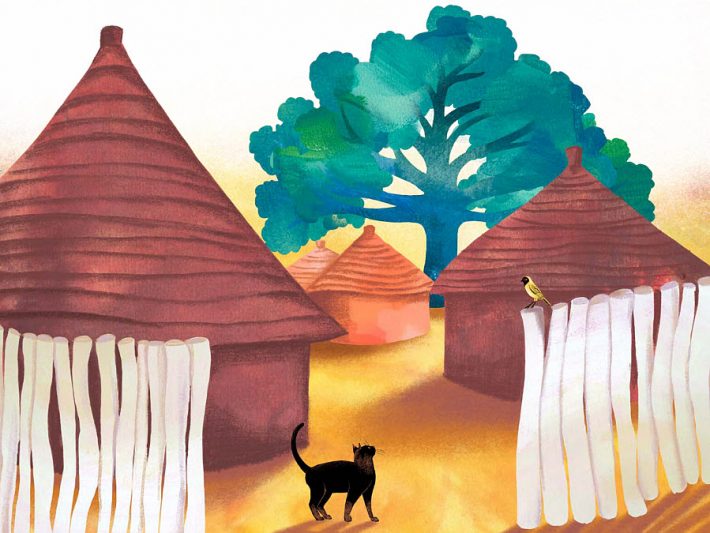 A detail of an illustration by Sophie Le Hire in Saaraba’s newly released ‘Les contes de El Hadji Leeboon.‘ Saaraba is the publishing house opened near the end of 2022 in Dakar by France’s Editis. Image: Editis/Saaraba

‘To Promote the Emergence of the Continent’s Talents’

The French publishing group Editis this month is announcing its opening of a second publishing house in Africa, Saaraba Éditions in Senegal.

Saaraba Éditions, headquartered in Dakar, is being led by Souleymane Gueye, and held a private opening event on December 8.

The creation of the Senegal house follows the 2020 establishment of Editis’ first such company, called Nimba, in Côte d’Ivoire. What distinguishes these companies is that their stated purpose is “to support local literary creation and to promote the emergence of the continent’s talents.”

As Publishing Perspectives readers know, a frustrating fact of doing business for many African publishing programs has been the plethora books exported to the continent by major international publishing companies. This creates stiff competition for locally focused publishers, as international bestsellers and other books appear on the African markets.

Editis, led by CEO Vincent Barbare, is second in size only to Hachette Livre in the French market, but in the cases of Nimba in Abidjan and Saaraba in Dakar—as well as with its house opened in 2022 in Montreal called Gründ Québec—the intent is to source and produce local writers and content.

Headed up by Samantha Thiery in Montreal, the Québec house, it’s focused on producing 15 books annually “for Québec children with local stories, original creations, written and illustrated by talents from the province.”

All three publishing houses—Gründ Québec, Nimba, and Saaraba—appear to be working entirely in children’s books.

‘Petites loutres en cavale,’ left, is from the Gründ Québec publishing house opened by Editis in Quebec, and is by Lucie-Rose Lévesque. At right is an illustration from ‘Contes Africains,’ released by Editis’ Ivorian house, Nimba. That book comprises 20 tales from West African oral traditions and is by Marguerite Abouet with illustrations by artists including Christian Epanya of Cameroon and Dominique Mwankumi of the Democratic Republic of Congo. Images: Editis/Gründ Québec/Nimba

Dakar’s new Saaraba has a goal of 15 to 20 titles per year, and in that case, the description reads, “A Senegalese house that accompanies local literary creation and favors works that reflect the daily life, experience and aspirations of Senegalese.

“A Senegalese house that accompanies local literary creation and favors works that reflect the daily life, experience and aspirations of Senegalese.”

“Particularly attentive to its local roots, Saaraba establishes its editorial line and favors works that speak primarily to the Senegalese, which reflect their daily lives, their experiences and their aspirations. The Senegalese publishing house reconciles this approach with values of otherness and openness to the world.”

There’s also a signal that Saaraba is looking to work in socially relevant topics as part of its brief, the relevant line reading, “Saaraba’s ambition is to entertain and bring pleasure to reading, while dealing with important issues.”

An example might be Yulu in the Land of Teranga by Roxane Dogan with illustrations by Ismaïla Fall, in which a child on Earth named Bilo meets an extraterrestrial named Yulu—and they get along swimmingly. “While waiting for Yulu’s ship to be repaired, Bilo takes care of this new friend and urges parents and friends to welcome him too, under the famous teranga in Senegalese, this sense of welcome that puts foreigners at ease.”

First releases from Saaraba had been prepared so that in December the new house at its opening could actually release the first two books listed here by Roxane Dogan, with the following three titles in the works:

This year, Saaraba has plans to start working in graphical narratives in comics and “African manga.”

In the case of Saaraba’s output, Editis anticipates distributing these publications in France, of course, as well as in Belgium, Switzerland, and French-language Canada.

While France’s publishing industry awaits word of who may be the buyer of Editis from Vivendi, Reuters reported at mid-December that Vivendi had offered remedies in response to the European Commission’s November instigation of an investigation of Vivendi’s proposed takeover of Lagardère, the parent of Hachette Livre. A sale of Editis is seen as part of that remedial endeavor.

As Reuters Paris has written, “The proposed deal” as being investigated, “would combine France’s two biggest publishing groups, Lagardère’s Hachette and Vivendi’s Editis, and it has come in for criticism from rivals including Gallimard.”

More from Publishing Perspectives on the French market is here, more from us on publishing in Africa is here, more on children’s books is here, and more on illustration and illustrators is here.