The late-2022 edition of the ‘Trans/Formations of Arabic Literary Theory’ had the cooperation of the Sheikh Zayed Book Award. 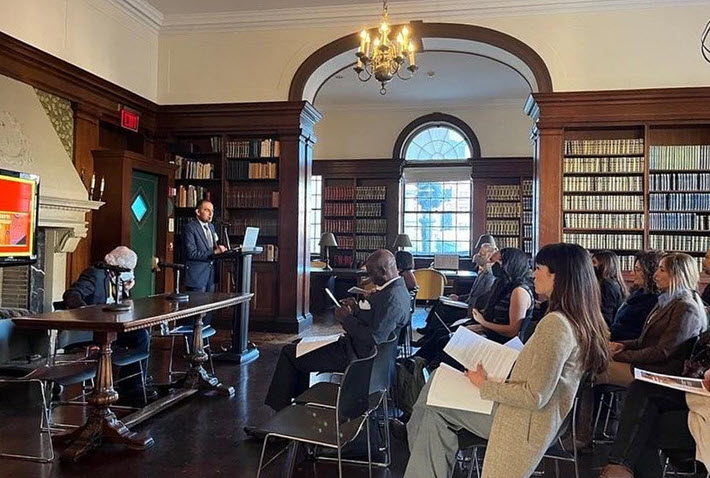 Continuing today recoup news items that came to us during our annual winter break in publication, the Abu Dhabi Arabic Language Centre has participated for a second year in the conference on Arabic literary and literary criticism at Columbia University’s Institute for Comparative Literature and Society in New York City. 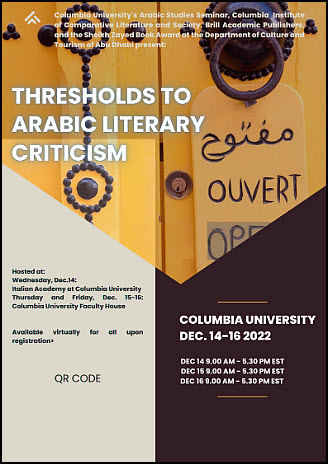 “Thresholds to Arabic Literary Criticism” was produced at the Italian Academy on December 14 and at Faculty House on December 15 and 16 with participation both in-person and through digital links. The program was co-sponsored by Columbia University Arabic Studies Seminar, Brill Academic Publishers, and by the Sheikh Zayed Book Award, which, as Publishing Perspectives readers know, is a program of the Abu Dhabi Arabic Language Center under the auspices of the emirate’s  department of culture and tourism.

As you’ll recall from our coverage, this is the conference program opened in March 2021 under the umbrella event-series title Trans/Formations of Arabic Literary Theory with a virtual discussion session titled “Theory of Arabic Literature: Prospects and Limits.” The first session was organized at Columbia on December 14, 15, and 16 of that year. That first edition covered a range of topics in literary theory and its development, as well as key issues related to Arabic literature. Sessions in that inaugural event also discussed contemporary challenges in Arabic literature, and the issue of decolonization as a theory. 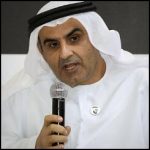 Bin Tamim noted the importance of collaboration with Columbia in such specialized international conferences as these, which he described as an important part of literary studies in comparative critical contexts that demonstrate “the nature of interactions between literature and the resulting shifts in vision and content.”

The conference explored the development of rhetoric in classical Arabic poetry and educational criticism, and featured a presentation from Arturo Monaco of the Sapienza University of Rome, “Theory in Use: Samples of Literary Comparativism in the Footnotes of Sulaymān al-Bustānī’s Translation of The Iliad.”

Another presentation, this one by Ana González Navarro of Universidad Autónoma de Madrid/Universidad de Barcelona, was titled “Toward an Arab Feminist Literary Criticism: The Case of Morocco.” That presentation was part of a series of papers delivered under the banner “Drifts or Caveats? Ethical and Political Discourse in Crosstemporal Arabic Literary Criticism.”

Under the heading “Traveling Criticism: Reshaping Imaginary Centers and Peripheries of the Arab World,” an intervention was made by Shuaib Ally titled “Irony as False Attribution of Beliefs: Abd al-Qāhir al-Jurjānī’s Contribution to the Theoretical Development of Irony in Arabic Linguistics and Exegesis.” Ally is based at McGill University, the seat of the Cundill History Prize.

Keynote addresses included “Theoretical Thresholds: Dependency and Thievery in the Arab Marketplace” from Columbia’s Muhsin J. al-Musawi and “Body Language in Arabic Literature” from the University of Birzeit’s Mahdi Arar.

Monica Ruocco of L’Orientale University of Naples spoke on “Is Rihlah Still a Genre in Contemporary Arabic Literature?” and Stefan Sperl of the SOAS University of London gave a keynote address titled “Arabic Poetry and Neoplatonic Poetics.”

In addition, Refqa Abu-Remaileh of Freie Universität Berlin gave a talk on “The Parallel Geographies of Palestinian Literature,” and Francesca Maria Corrao of Luiss University Rome spoke from her presentation, “On ‘Humanism and Democracy’ by Edward Said: An Idea of Criticism Beyond Cultural Boundaries.”

As Publishing Perspectives readers will recall, the Sheikh Zayed Book Award has announced nine newly funded translations of six books from Arabic into five languages. These publications, supported by the Zayed Award’s translation funding program of up to US$19,000 in financial support five translations of children’s work and four of literary works.