From soaring costs to the competition of subscriptions: HarperCollins UK CEO Charlie Redmayne on the fundamentals at Frankfurt. 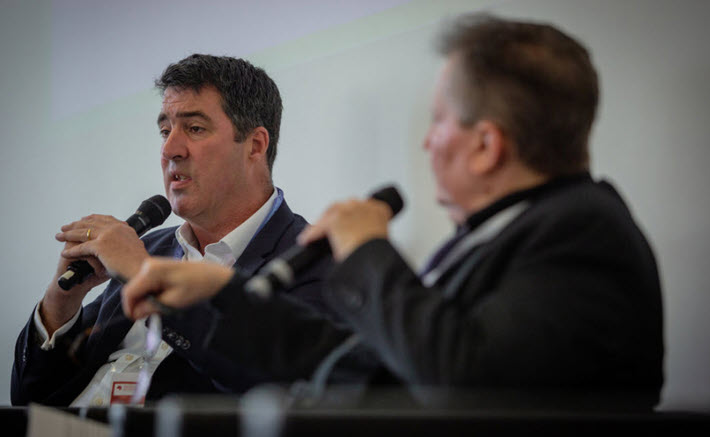 ‘Make Sure You’ve Got Publishing That Works’

As our readers know, we inaugurated our Publishing Perspectives Forum this year at Frankfurter Buchmesse, and were gratified at the responses—both from our almost 40 speakers who shared with us their time and expertise, and from the many hundreds of trade visitors who made their way to our venue and found ways to work our programming into their Frankfurt schedules.

We have further development underway now for “PP Forum,” as we call it, and you’ll be hearing more about it in the new year.

With the end of a long 2022 finally in sight, many in the industry are reflecting on the complex array of issues and trends faced by the world book publishing industry. Having proven itself far more resilient than many might have expected at the onset of the coronavirus COVID-19 pandemic, mutiple elements of the business in many markets already are deeply into a set of financial and operational challenges—inflation, persistent supply-chain hurdles, ballooning costs of doing business, and more.

Publishing Perspectives Forum was opened with the first entry in our Executive Talk series, featuring HarperCollins UK CEO Charlie Redmayne. As he’d confirm for our audience, Redmayne led his company to a record year in 2021. His trademark sense of humor—especially about himself and talk of success—kicked in almost immediately, however, reminding Frankfurt’s trade visitors and exhibitors of why he’s among the most forthcoming and engaging CEOs in the international business today.

“I sometimes wonder about CEOs who talk about record years,” he said, “because one of the things that as a CEO you’re meant to do is grow the business. Effectively, if you don’t have a record year, that means you’re in trouble. So we have thankfully continued to grow our business over the years, yes.”

Quickly turning to the shifting and seemingly darker year-end terrain for publishing, though, he agreed, “As you said in your introduction, I think all publishers are facing some very, very significant challenges at the moment, from rising costs to others, but the key thing therefore, is to make sure you’ve got publishing that works.”

Both last year and this year, HarperCollins UK, Redmayne pointed out, has had “some fantastic books that worked well for us.

“We also had huge growth in our education business with a with a phonics scheme called Little Wandle. When these things launch, you think, ‘Well, it’ll be great, they might sell a few and we might do a bit of revenue through it.’ But nine months into the mission, this particular phonics scheme was teaching one in four children in the UK to read, which makes it the most successful phonics scheme I think that has ever existed. When you have hits like that, it does make a difference for you.”

In part because of such strength, Redmayne confirmed, his British arm of HarperCollins has not had to handle even the dozen or so layoffs that the United States house announced this autumn. The talk of rising costs, however, he confirmed, is completely validated by his own experience.

“When I was doing my budget in January, for a year,” he said, “one of the assumptions I made—which I thought was a fairly radical one—was that energy costs would go up by about 70 percent in a year. Which, if you’re running a 750,000-square-foot warehouse in Scotland that has sorters and machines running 24 hours a day, seven days a week—energy is an important aspect of it.

“I think I’m right in saying that our energy costs have, in fact, gone up by 250 percent. And that is a really impactful piece.”

The trend is hardly limited to energy pricing. When Redmayne outlines some of the cost-jumps he’s tracking at the kind of scale reached by a company like HarperCollins UK, what might otherwise be vague-sounding references to “higher costs” come into precise focus.

“So yeah, I think across our business, the costs are very severe. Like they are, frankly, for all other businesses. I think we’ve been good at making sure that we mitigate against those costs as much as possible, that we negotiate the best deals, that we’re as fleet of foot we can be. And then the other side of it is that we’ve driven our business. Our sales of backlist have been strong, but our frontlist publishing has also been strong, and that way, we’re maintaining that level of profitability. For me those are the key things.” 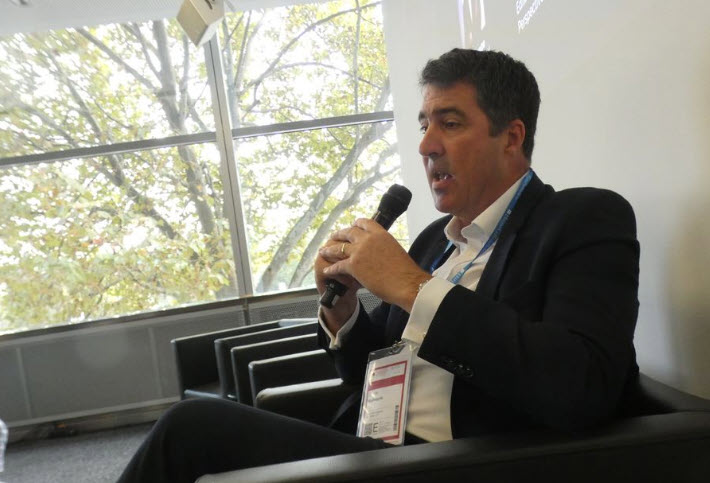 HarperCollins UK’s Charlie Redmayne: ‘If you think about what’s happened in the rest of the economy in terms of inflation, books have remained very, very cheap for a long time. There has to be some adjustment.’ Image: Publishing Perspectives, Porter Anderson

When it comes to that comparison of smartphones and books in a £15,000 container, Redmayne has another point to make. Remember that a smartphone maker can widen margins with a relatively restrained surcharge added to the £499 cost of each smartphone.

“My own view,” Redmayne says, “is that the cost of books has been incredibly cheap for a very, very long time. And I think that’s partly because of the way we operate our businesses. As you know, we actually operate our businesses on each individual publication. So each individual publication is an event. If you try to move the price a bit on it, it’s all, ‘Oh, my goodness, no, because that could impact that particular book and that particular author.’ So I think the prices in the book industry have stagnated for a long time.

“I was sent a copy of a book by an ex-HarperCollins author the other day and he was encouraging me to republish that book because he thought it was particularly pertinent for today. It’s a paperback from 1993. And if you bear in mind that the average paperback last year in the UK was costing about £7.99, how much do you think that  paperback cost in 1993? Well, the answer was that this paperback cost £5.99 in 1993.

“If you think about what’s happened in the rest of the economy in terms of inflation, books have remained very, very cheap for a long time. There has to be some adjustment. I think books remain incredibly good value and people will continue to buy them because they’re incredibly good.”

Subscriptions: ‘Something We Need To Fight Back On’

The various entertainment media today–very much including books and reading–do battle with each other over consumers not just on price but also in terms of time, the customer’s time. The “attention economy” is the one in which the customer dithers between a video game, a film, an album, a concert, a class at the athletic club, 40 more quick videos on TikTok … and a book.

“The one thing we have to think about is that we haven’t actually had a recession since subscription channels, subscription television, really took off to the level it has done.”Charlie Redmayne, HarperCollins UK

“One of the things that I’m sort of challenged over,” Redmayne said, “is that as we go into a potential downturn, everyone always says that books are recession-proof. And people tell me that actually a book is the cheapest good present you can buy at Christmas, and that therefore people will continue to buy them.”

And yet, “The one thing we have to think about is that we haven’t actually had a recession since subscription channels, subscription television, really took off to the level it has.”

Assuming that predictions of downturns prevail—confirmed by economists as actual recessions or simply felt deeply at the kitchen tables of the world—Redmayne is warning, as he’s so good at doing, that a new dynamic, that of subscriptions, may play an outsized role in many depressed markets. He’s a CEO who uses his marketing background to sense such undercurrents, and the red flag he’d raised in our session at Frankfurt got the attention it deserves.

“We could be, as publishers, competing” for the first time under such recessionary pressures, “with those subscription channels, in terms of share-of-wallet, yes, but also in terms of share-of-time. And it’ll be really interesting to see how the publishing industry and how the book industry stands up against them.

“But the thing about subscription businesses,” he said, “is that the actual value is all about perceived value. People think, ‘I couldn’t possibly do without my Netflix subscription, for which I’m paying £7.99 or £8.99, because I watch so much.’

“And then if you think about how much you actually watch on Netflix—eight hours a month or nine hours a month? Maybe 10 hours a month? It’s basically the equivalent of a really good book. The perception that people have is that they use it much more and that it’s a much greater value. I think that’s something that we need to fight back on.”

Redmayne recently has had special reason to think about value and subscriptions, with the release by Netflix of director Tobias Lindholm’s adaptation by Krysty Wilson-Cairns of Charles Graeber’s book, The Good Nurse. Atlantic Books publishes the tie-in edition in England, and Hachette’s Twelve has it in the States. 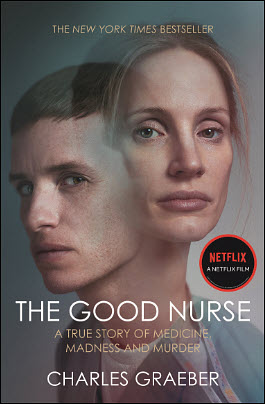 The film is a quietly gripping Capote-like thriller based in what’s believed to be the United States’ most prolific case of serial killings. It stars Jessica Chastain and “my brother Eddie” Redmayne as a nightmarishly different Charlie: Charles Cullen, thought to have killed as many as 400 people.

Redmayne saw the London premiere before Netflix’s worldwide release of the show on October 26, and his pride in Eddie’s profoundly immersive performance as Cullen was obvious as he spoke very briefly about it at the prompting of a journalist (might be this one).

“It’s a fairly dark thing,” he said of Lindholm’s film, which is eerily balanced between hospital-hallway routines and unspeakable, inchoate danger. “The two of them,” Eddie Redmayne and Chastain, “were absolutely spellbinding. It’s some of the best acting I’ve seen.”

And then, all of us in the Publishing Perspectives Forum snapped out of it: “Obviously we’re not here to sell Netflix,” Charlie Redmayne said with a smile. 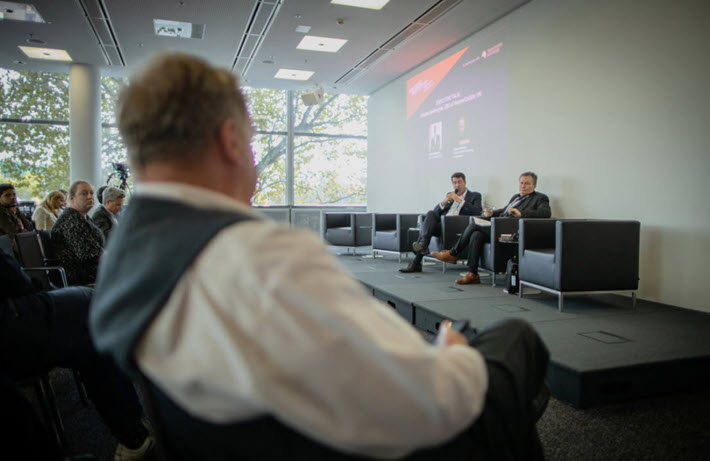