Italy’s publishers have set a Frankfurt goal of bringing rights sales of Italian books into other markets up to the level of imported titles. 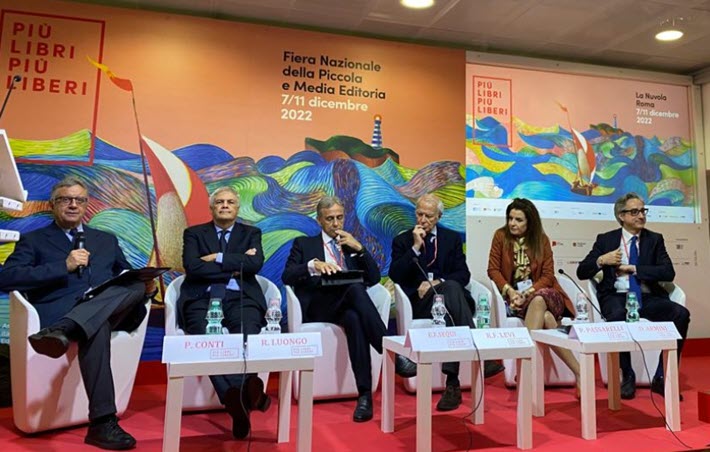 As many of our readers know, the 2023 Frankfurter Buchmesse guest of honor nation is Slovenia. Guest of Honor Italy will follow in 2024.

Particularly as the Association of Italian Publishers (Associazione Italiana Editori, AIE) counts its book business as comprising Europe’s fourth largest publishing market, many have been hoping to hear something of what its plans might be.

Wednesday’s session (December 7) was the first public discussion of the project, and was held in the Moon Room at Rome’s La Nuvola (“The Cloud”) convention center as the AIE’s book fair Più libri più libero was getting underway. The next day (December 8), Juergen Boos, Frankfurt’s president and CEO, would join a discussion co-produced by Aldus Up  focused on the fact that Italy has two guest-of-honor stints coming, the one at Frankfurt in 2024 and the pays a l’honneur, country of honor at the 2023 Festival du Livre de Paris.

In the discussion about the market’s program for Frankfurt, the intent was less to lay out plans and programing but to demonstrate a broad united front for Guest of Honor Italy across the country’s cultural community and policy makers. And it was announced that the project has a very specific goal: the publishers association intends “to close the gap between what Italy sells and how much it imports in terms of translation rights abroad.”

That’s no small ask. “There’s a gap of 500 titles” between books translated into Italian from other markets and Italian titles being sold for translation into other languages and territories. “The goal,” the publishers say, “is to break even.”

The official statement offered in the discussion in Rome last week says that Guest of Honor Italy at Frankfurt “will represent an important opportunity to further strengthen the international reach of Italian publishing and the cultural ties that unite us to the world of German publishing.”

What followed were comments in what was effectively a news conference, from key figures about the project. Journalist Paolo Conti of Corriere della Sera moderated.

AIE president Ricardo Franco Levi—who is also president of the Federation of European Publishers—told the audience at the Frankfurt session, “For the first time we are presenting the Frankfurt 2024 project,” an undertaking, he said, that has been in the works since 2017.

“A great recognition of Italian publishing. Becoming a guest of honor is like winning an Olympic award.”Ricardo Franco Levi, AIE

The spotlight in Frankfurt, he said, “is a great recognition of Italian publishing. Becoming a guest of honor is like winning an Olympic award.”

And he suggested that what’s coming in 2024 will have a strong interdisciplinary character to it: “The goal is to have in all respects an Expo of Italian culture and creativity,” he said. “Surrounding and alongside the book—which is the heart of the operation—we want to bring theater, music, design, and even cooking to international attention. Italian culture and creativity, really. There are also cultural diplomacy implications that are obvious to all.”

Sequi: A Vision, Political Will, Resources

From the ministry of foreign affairs, Ettore Francesco Sequi noted that the intent of the session was less about offering details and more about over-arching ambitions for the program Italy will stage during its year as Frankfurt’s guest of honor.

“This initiative is a concerted effort using the best energies of the country,” he said, “including publishing. To be successful in any human endeavor, three things are required: A vision, knowing where to go is the first. The second thing is a political will that exists for how we have equipped ourselves, for how we intend to continue equipping ourselves. And then you need resources, which can be of many types—the economic/financial, planning, human resources and then the intangible ones that we make available as the foreign ministry, which are the deepest wealth we have—that’s our network of embassies and cultural institutes, which are available for this project.”

In terms of translations, he said, “We have invested in Germany in recent years, from now until then we have to make a much stronger effort. In the balance of payments we are in a deficit and must go into surplus. We’ll have a chance not to ‘relaunch,’ but to strengthen our relationship with a country that’s essential to us, as Germany is from many points of view, but above all cultural. Our political, financial, and cultural investment exists and will increase.”

Luongo: Publishing Is the Driving Force

From the Italian Trade Agency’s (ICE) Roberto Luongo: “For us, Germany is the first exporting country in the world, with a fundamental economic interconnection. Using culture and publishing as a lever of our soft power is very important and we must make sure we use it to the fullest. We also have a great tradition in publishing, we’re organizers of the Italian pavilion at the Buchmesse.

“Now we have this opportunity to present the Italian publishing industry, connected to all our industries of creativity. The importance is to ensure that publishing is the driving force for the entire Italian economy. We must make the effort to present ourselves at our best. AIE is the pillar of this organization, with an aim of demonstrating the best that a country can do at an international level. We’ll win this challenge, I’m sure.”

Passarelli: ‘How Foreigners Perceive Us as Italy’

Paola Passarelli, the ministry of culture’s director of libraries, spoke of the importance of the session’s venue—amid Più libri più libero‘s emphasis on small and medium-sized publishers, which she said represents “an undergrowth of cultural vivacity that embodies the Italian spirit and culture in the best possible way.

Small and medium-sized publishers represent “an undergrowth of cultural vivacity that embodies the Italian spirit and culture in the best possible way.”Paola Passarelli, ministry of culture

“This is a significant location for what we want to represent abroad. It’s a very close date. We talked about it many years ago at the ministry of culture,” where, she said, extraordinary measures have been taken to support cultural programs linked to the pandemic “but also with a long vision.

“In the approved culture plan,” she said, “and in the reading plan in particular, there are €3.8 million (US$4.1 million) for book promotion. Partnership with all institutions is essential. We want to see Frankfurt 2024 as an opportunity to rethink how foreigners perceive us as Italy. We have to push the translations towards Germany.”

Armini: ‘Germans Are the Most Numerous Visitors to Italy’

Dario Armini, who heads the cultural office of the Italian embassy in Berlin, told the session that the perception of Italy in Germany “is extremely positive.” He spoke of a cultural “root” to this, an  “emotional bond with our country. In the Greco-Roman culture, the Germans see the roots of their civilization. And then there’s the great passion that we have for the other phases of our culture, from the Renaissance onwards, a culture known because we travel a lot—Germans are the most numerous visitors to Italy.

“For this we must always propose something new and in-depth. It’s a challenge we’re able to carry off well, thanks to an investment of resources that takes advantage of nine consulates and five cultural institutes, the highest number for Italy abroad other than with the United States.”

As this story is published: We’re being told by Italy’s publishers’ association that a proposal has been put forward in parliament to withdraw the innovative “18App,” which provides each Italian who turns 18 to spend €500 on cultural purchases, including books.

The associations of publishers, booksellers, writers, and librarians are appealing to Rome to withdraw the cancellation proposal. The 18app program is credited with helping the Italian market’s reading rates among those aged 18 to 21 to jump in three years from 46.8 percent to 54 percent.

“It would be a paradox for Italy to cancel a virtuous measure that many have copied from us,” per the association’s media messaging. We continue to follow the story.

More from Publishing Perspectives on Frankfurter Buchmesse is here, more on guest of honor programs is here, more on the Italian market and news from its publishers’ association is here. More on rights trading in the international book business is here, and more on trade shows and book fairs is here.