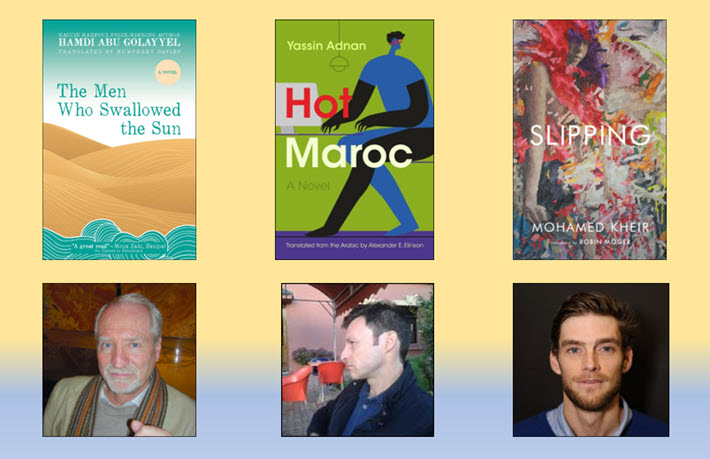 Three English translations of Arabic literary works are now are in contention for the 2022 Saif Ghobash Banipal Prize.

The three newly shortlisted works for the 2022 edition of the Banipal Prize for Arabic Literary Translation and their translators are, from left, Hamdi Abu Golayyel’s ‘The Men Who Swallowed the Sun,’ translated by the late Humphrey Davies; Yassin Adnan’s ‘Hot Maroc,’ translated by Alexander E. Elinson; and Mohamed Kheir’s ‘Slipping,’ translated by Robin Moger

A Winner To Be Named in February

In London today (December 1), the Saif Ghobash Banipal Prize for Arabic Literary Translation has announced a three-book shortlist chosen by its jury from a submissions pool of 17 titles. To a degree, the flexibility of this small but carefully followed awards program is on display in the fact that last year saw five shortlisted works and the 2020 edition had five shortlisted titles, as well.

Media messaging tells us that the jury initially selected 12 books for a longlist this year. In working to choose a shortlist from that group, organizers say, the jurors’ discussion touched on ” the ambition of the original work, the accuracy and flair of the translation, and the range of literary genres and styles with which they were presented.”

Juror Susheila Nasta says, in a prepared statement, “At its most powerful, literature should act as an imaginative passport into other worlds, a conduit to take us inside the lives of others, inviting us for a moment to stay and be part of an unknown world. Words transport as do good translations. At their best, translations also take us elsewhere, offering readers stories in cultural landscapes they wouldn’t otherwise encounter,” she says. “The Saif Ghobash Banipal Prize for Arabic Literary Translation makes this journey possible.”

This is one of the many prizes administered by the Society of Authors in England, although, like a few others of those awards, the Banipal prefers to make its announcements independent of–and usually in advance of–reports from the society. The prize is awarded at a ceremony hosted by the Society for its multiple awards results.

This year, two of the three shortlisted works are from university presses. All three of these works have their translators credited on their book covers.

One of the three translators is being honored posthumously: Humphrey Davies–a two-time winner of the Banipal Prize, and twice a runner-up, as well–died on November 12, 2021 in London. He was 74.

The winner chosen from the three shortlisted works is to be announced in February.

The prize is wholly sponsored by Omar Saif Ghobash and his family in memory of the late Saif Ghobash, who was passionate about Arabic and world literature.

This is Publishing Perspectives’ 204th awards-related report in the 216 publication days since our 2022 operations began on January 3.