With the United Arab Emirates having celebrated its 51st national day on Friday (December 2), the guest of honor pavilion at Guadalajara International Book Fair capped a particularly robust run—in a pavilion so big that both its London Book Fair and Bologna Children’s Book Fair guest stands this year might have fitted into this one.

The stand’s staff reports that it counted at least 450,000 visitors and produced 27 literary and cultural events for book fair attendees, including two film screenings. Khoula Al Mijaini, the director of fairs and festivals at Ahmed Al Ameri‘s Sharjah Book Authority–which produces the enormous Sharjah International Book Fair–reports that 66 Emirati books and 15 other Arabic books have been translated into Spanish as part of the emirate’s participation in the show.

Having opened on November 26, this major public-facing fair closed on Sunday (December 4) reporting a total 806,805 visitors at Expo Guadalajara, bringing the turnout figures back into range with pre-pandemic numbers.

The show’s president, Raúl Padilla López, reports that 2,173 publishing brands were represented on the bookselling floor from 49 countries. As many as 775 writers from 44 countries were involved in Guadalajara’s trademark furious pace of author presentations, interviews, readings, and question-and-answer sessions.

Padilla López noted a headcount of 184,409 school students, many of them engaged in some of the 1,500 workshops and/or 77 shows performed during the run. While this fair is intentionally focused on readers in the Spanish-language markets of Latin America, there were 57 literary agents engaged in one-on-one meetings in a rights center with 75 tables, and training sessions that included, for example, the seminar on accessible publishing produced by the fair, with Hugo Setzer and the Cámara Nacional de la Industria Editorial Mexicana (CANIEM), Karine Pansa and the International Publishers Association (IPA), along with the World Intellectual Property Organization‘s Accessible Books Consortium (ABC).

Earlier in the fair, Padilla López talked about the importance to Guadalajara of Guest of Honor Sharjah, saying, “The presence of Sharjah reminds us of the strong Arab roots of our language, in the imprint of its art forged centuries ago during a unique cultural experience in the West, which is what Carlos Fuentes called the presence of the Arabs in Spain.”

Speaking on behalf of Sharjah, Sheikh Fahim Al Qasimi, executive chairman of the emirate’s department of government relations, highlighted “the cultural bridge” between the Arabic and Spanish-speaking worlds that being a guest nation of honor represents.

Al Ameri’s secret, however, for calling book fair-goers to his stands is boisterous, dynamic music: Sharjah’s guest of honor programs this year have featured a team of up to 20 or so Ayyala dancers, vocalists, and percussionists who move in stately rhythms to the drums, tapping narrow bamboo canes on the ground. At London Book Fair, at Bologna Children’s Book Fair, and at the Guadalajara International Book Fair, these performers have sent up a remarkable level of pulsing, vibrant sound that now has echoed throughout Olympia London, BolognaFiere, and Expo Guadalajara.

Ayyala emphasizes the dignity of the Bedouin traditions, hence the upright, swaying air of formality the men bring to their movements. These one-of-a-kind performances never fail to draw public fair-goers and trade visitors alike. 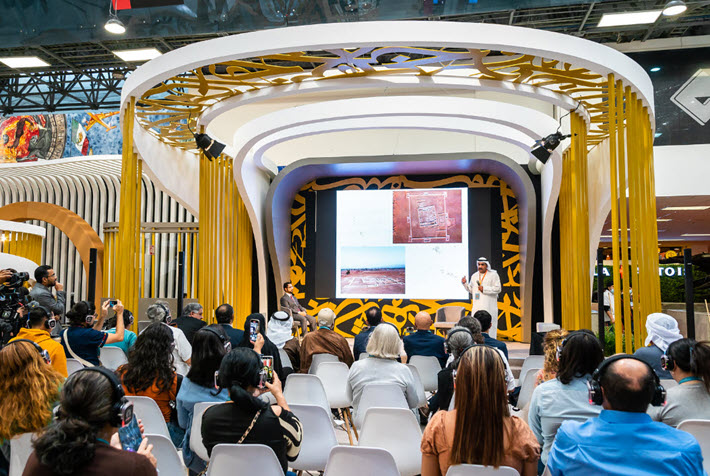 In the Guest of Honor Sharjah pavilion at Guadalajara International Book Fair, the theater here is seen in operation with Eisa Yousef onstage discussing the architectural work at Mleiha. The stage’s calligraphy-inspired canopy and Sharjah’s trademark use of vertical timber creates an almost weightless, see-through impression for the performance space. Image: FIL Guadalajara, Nabil Quintero

One key man behind the many Sharjah guest of honor pavilions we’ve seen this year—at London, at Bologna, and this time in the biggest example of all at Guadalajara—is Weam Ibrahim, managing director of Q7 Exhibition and Event Management, based in Dubai. Publishing Perspectives approached Ibrahim prior to the London guest of honor program, to ask for some insights into how he and his team conceptualize the distinctive stands that have become a hallmark of Sharjah’s appearances. It turns out that he sees what he does much as a translator might see the original work of an author: he’s there only to interpret, so that what’s seen and heard is what his client, in this case Sharjah, wants to say. 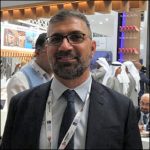 “It’s connected to the culture of Sharjah,” Ibrahim says, referring to the genesis of each stand’s design, “but we also study the culture of the country we’re going to participate in.” By using elements of design that can resonate for the host culture, he says, the regional attendees feel comfortable with Sharjan aesthetics.

In Guadalajara, you could see this in the Sharjah stand’s golden filigreed canopy: calligraphy. At several points on the stand, visitors looked through screens made of the flowing cursive, translating an exhibition’s display of calligraphic art to the space in which visitors were sitting.

“Before we start the brainstorming,” Ibrahim says, on any guest of honor project, “the requirements of the client come first.” That’s Sharjah Book Authority, of course, where Al Ameri and his staff determine the messaging, the tone, and the physical needs of each different show’s appearance. Great emphasis went into the programming and performance space in Guadalajara, for example, while in Bologna the seating areas for meetings and conversations were the standout spaces.

At London, staffers quickly moved chairs in and out, so that a lecture or discussion could be held for an hour before the chairs disappeared to accommodate welcoming and speaking with trade visitors in a spacious environment. In an unusual touch, that stand was divided by a corridor lined in warm, dark woods and artwork—an exhibition device used to divide the space with far more aesthetic value than a wall would have offered.

This is part of what Ibrahim calls the “luxurious” approach that was favored for the London appearance. “The building in London, I love it,” Ibrahim says, speaking of the Olympia’s soaring vaulted glass ceilings—clearly something a designer might enjoy, but also probably causing some thought about lighting in a 500-square-meter space flooded with daylight.

Sharjah’s marketing team and its own designers participate in each guest of honor program’s planning process, with Al Ameri making all final decisions and refinements for Sharjah. Ibrahim’s firm is highly internationalized “to get all the tastes” into their work, especially because his company is found operating in multiple industries, not just in publishing-related events. Q7 has an office in London, its workshop in Dubai, “and also we have a manufacturing house in Europe.” And while he puts his designers together on projects “on a friendly basis, not a bossy basis,” he says with a laugh, “I am involved in everything.”

You’ll usually find Ibrahim on Sharjah’s guest of honor stand, making sure the build is correct and operating as expected, while checking to be sure Al Ameri has what he needs. 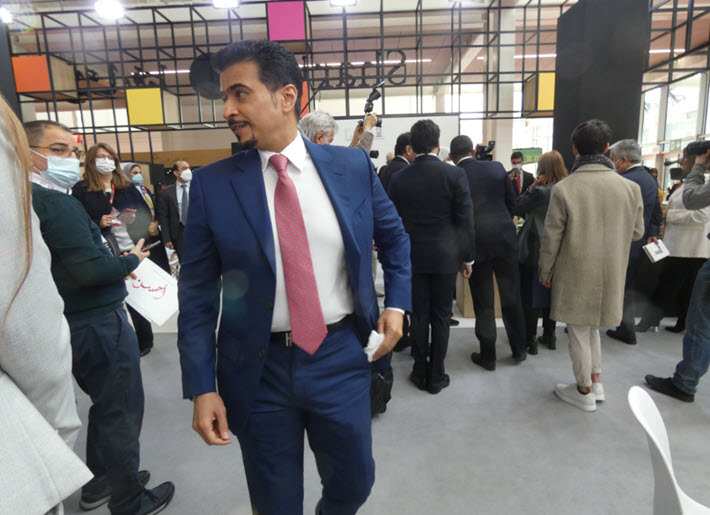 The international publishing industry’s traveling corps knows Ibrahim’s signature elements, hallmarks developed with Al Ameri that his team now use to create a consistency of aesthetic from one guest of honor stint to another. For example, there are almost always sturdy vertical timbers, upright beams used to form slatted walls, both defining spaces and yet still inviting visitors in. Against the wood, Ibrahim’s group of designers use a lot of white, reflective of the desert heat and the blazing-white Emirati kandura and kaffiyeh or ghutra—white or checkered red.

“In the first meeting we have with the client” to create a special book fair or trade show stand or pavilion, “we ask what message he wants to deliver this time.”Weam Ibrahim, Q7

By contrast, darker earth tones frequently “cool down” seating areas for meetings and conversations. Shelves, again in wood, hold books in various parts of a stand. And the biggest accomplishment may be a clever division of space. Most of these stands have a presentation space as well as those meeting areas and book displays, of course, as well as discreet utilitarian closets for the staff, and more.

How flexible these factors become, however, was clear in the Q7 stand for Sharjah as Bologna’s guest of honor, where sleek black metal gleamed around a stand focused more on comfortable conversation spaces and meeting alcoves than presentation venues. The effect was a Milanese-smart stand, more than 350 square meters wide, with Mondrian-like blocks of color stacked into the exterior mesh, a contemporary enclave but still puncutated by the warm woods of those upright beams.

Originally from Iraq, Ibrahim sees himself as a self-made man who obviously loves his work. “You see me every time” on a Sharjah set, he says, wherever it is in the world, “following up on my work. Making my client happy. It’s my investment.” He’s been working with the Sharjah team for some 10 years, he says, and the close association is part of what has made both “the client” and Q7 successful. Working at Al Ameri’s direction from Sharjah Book Authority on each of these events, Ibrahim knows that the introduction a good guest-of-honor pavilion provides is not only about a market’s literature but also about its culture. 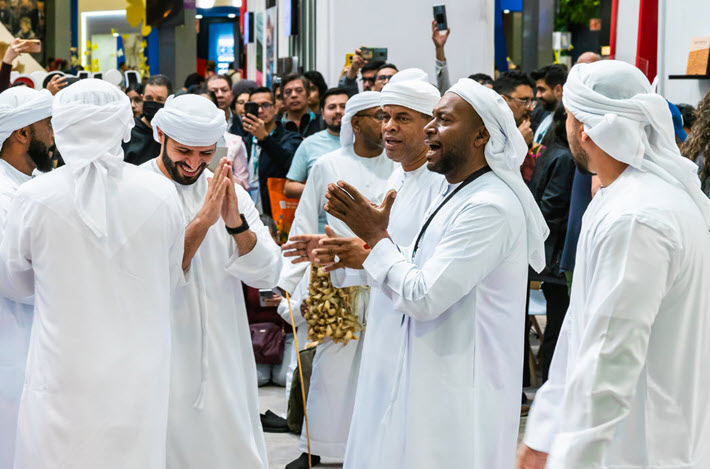 At Guadalajara, the Sharjah stand has featured not only its major presentation and display areas but also towering book sculptures, four sets of looming tomes that help channel the crowd through the space while doubling as artwork-exhibition walls to honor the fundamental reason for the Sharjan presence: the literature.

“In the first meeting we have with the client,” Ibrahim says, “we ask what message he wants to deliver this time. We sit, we discuss, then we start the design. I keep our designers up to date as they’re researching,” and the result has been some of the most prominent guest of honor facilities at some of the biggest fairs in international publishing this year.

At Guadalajara, Sharjah’s stand was celebrated by its Mexican hosts, carefully crafted awards arriving in a long procession through the exhibition hall with the fair’s director-general Marisol Schulz and a mariachi band on hand to serenade the visitors from Sharjah.

That “bridge” between cultures mentioned by Sheikh Fahim had been built, in part by the work of Ibrahim and his Q7 team’s collaboration with Al Ameri and Sharjah Book Authority. And yet, there’s a steady, quite humility to Ibrahim’s conversation. After all, he points out, the work is not about him or his company. The ideas, the significance of the work, he says, come from Sharjah. “And I’m a supplier,” he says. “A provider.”