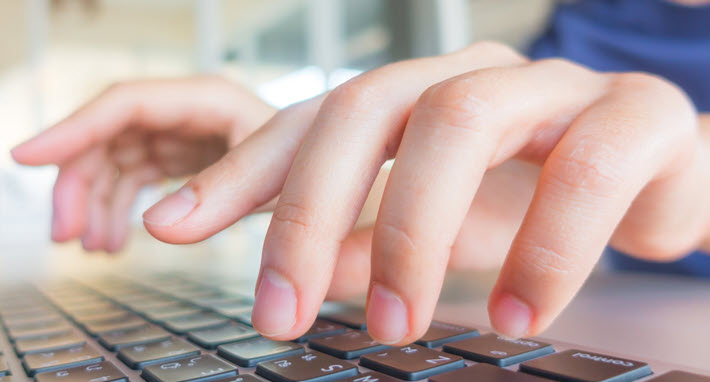 A new British survey of authors warns of falling incomes and faltering sustainability in writing occupations. 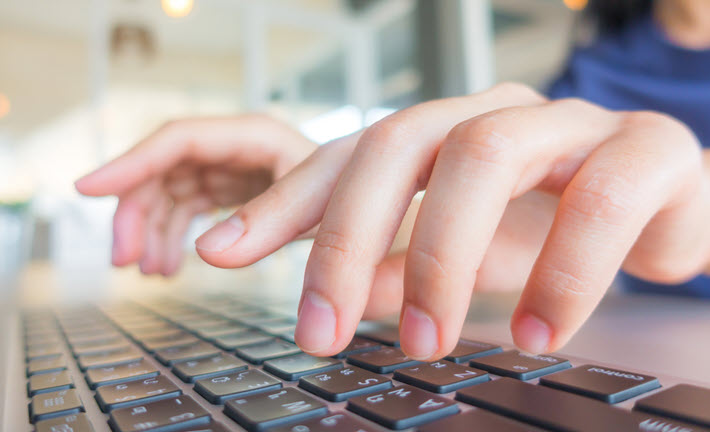 A ‘Devaluing of Creative Labor’

As we near our start of publication for 2023 (on January 3), you’ll note that Richard Charkin’s year-ending column mentions the recent report commissioned by the United Kingdom’s Authors’ Licensing and Collecting Society (ALCS). The researchers who wrote the report did so under the auspices of the “CREATe” Centre at the University of Glasgow. (The name is an acronym for Creativity, Regulation, Enterprise, and Technology, and the program was established in 2012. More information on it is here.) 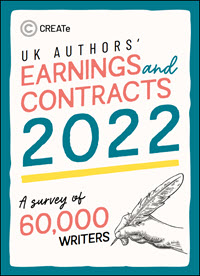 The top-line figure in the new 2022 report paints an even less felicitous picture, putting median earnings from self-employed writing in the UK at £7,000 (US$8,466), obviously a substantial drop.

The researchers who are reporting out their observations here are:

Thomas, Battisti, and Kretschmer write, “We chart a decline in median (typical) earnings from self-employed writing among primary-occupation authors of 38.2 percent (in real terms) since the last survey in 2018 (i.e., from £11,329 to £7,000).

“Even more dramatically, we see a sustained downward trend over the past two decades that seems to be associated with changes to creative labor markets in the digital environment.”

Here’s a simple graphic representation of that downward trend in figures that come from reports previously released:

There are three key classifications of writers and/or authors in play here.

At 86 pages, the report acknowledges the contextual impact of “two hugely disruptive events for UK authors: the COVID-19 pandemic (the first UK lockdown started on March 23, 2020), and Brexit (the transition period ended on January 1, 2021). We find that, despite being sometimes heralded as great equalizers, these events had significant and disproportionate effects on certain groups of authors.”

The work, they write, is also “situated amid an arguably global trend toward the devaluing of creative labor.”

The range of writing endeavors represented here is broad, with 65 percent of the respondents’ income reported to come from the book business.

And yet, despite the lead in books as income in the previous question, in terms of what sectors those responding may see as the sources of most of their income, academic writing is at the fore. These classifications are referred to as “genres” in the study, but of course, “genres” form a different index in the standard usage of the term in book publishing, where this list might be more readily recognized as sectors.

Only 5 percent of the total group of respondents place themselves as working in audio and/or audio-visual productions. Those small representations, however, produce this breakdown of where they see the most important sources of earnings, with nonfiction radio and film tied for the lead, each at 20 percent, in the total sample. Among those primary-occupation respondents, nonfiction radio and film are joined by television drama, each at 19 percent.

There’s an interesting section on Page 67 of the report on audio-visual authors, including a look at the flux generated during the still-ongoing coronavirus pandemic. In that section, the researchers write that they see “changes to the points in payments to audio-visual authors becoming more stratified, rather than representing long-term or steady earning potential.”

What’s more, they write, “Audio-visual authors also increasingly discuss their relationship with large streaming platforms [that] influence the nature of the operation of contracts in this industry.” They write of a trend put forward by respondents in these industries “to opt for complete buy-outs in audio-visual writings, rather than long-term earnings through repeat fees.”

‘The Writing Profession[s] and Sustainability’

One feature of the difficult task set for these researchers is managing the broad range of occupational (or too often aspirational) areas of endeavors under the heading of “writing.” An interesting graphic illustrates how the researchers say they “accounted for differences for earnings of authors across different occupations, as certain sub-sectors or genres may produce higher or lower incomes.” You’ll notice that one “sub-sector” is classified as “Academic/Teacher.” 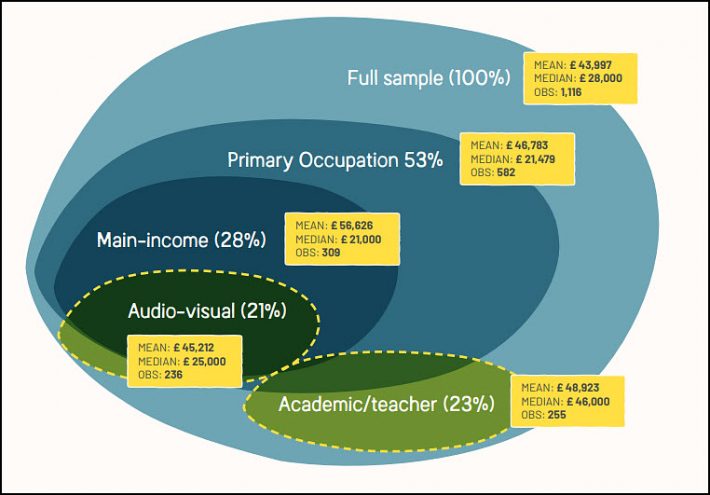 Similarly, the sheer breadth of career formulations and roles that fall under the umbrella term “writer” are daunting, as are the range of contractual models. This makes it difficult to assess fully what can be learned from the best-intentioned and -executed survey work. As the researchers, themselves, write, “Due to the lack of a stable definition of an ‘author,’ we did not apply any statistical weights to make the survey more representative for the total writing population.”

A helpful distillation of some of this long report’s findings is provided by the Society of Authors, the union and leading advocacy organization for writers in the UK. In its summation, the society writes:

As a central question, the authors’ society picks up on a section of the report opening on Page 32 with a header reading “How Sustainable Is the Writing Profession?” While the question is certainly understandable, a good place to start might be by making that “writing professions,” plural. And in a world in which cinematic and television production is surging—often based in books and almost always dependent on screenwriters—it’s not as if all efforts in the broadest writing spheres are coming to nothing, although there are many challenges there, too, of course.

The range of potential roles represented by the term “writer” can mean that a writer becomes a show-runner. And that show’s director may be its writer. The author of a book on which a film or series is based may be a producer. The permutations are manifold and the struggle to track and compare and analyze the viability today, let alone the future sustainability, of one over-arching “profession,” singular, called “writing” is simply not possible in as neatly a way as might be convenient.

In the graphic below, a given respondent’s “main profession” may lie in one of 12 categories before the list reaches “other.” 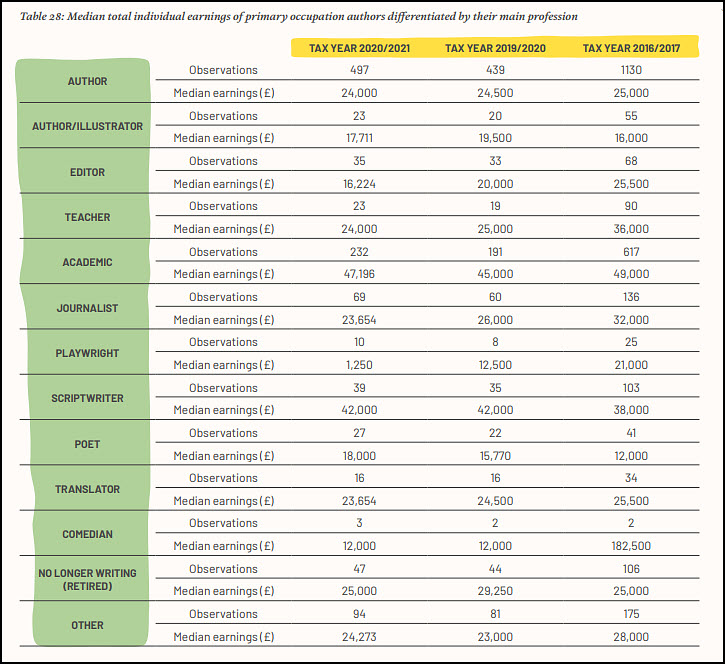 “As illustrated by our analysis of the downward trend in authors’ earning,” the researchers write—again in terms of a single profession—”the lived reality for many is that the income generated from writing alone is not livable and certainly not affluent. In theory, this should also mean that the profession of writing itself is not desirable nor sustainable, as authors leave the profession to seek other avenues of income; the number of primary-occupation authors should then, it is supposed, decline.”

“These response rates should be treated with caution when extrapolating to the broader population of authors. Further, due to the lack of a stable definition of an ‘author,’ we did not apply any statistical weights to make the survey more representative for the total writing population.”'UK Authors' Earnings and Contracts 2022'

As instructive as that high-level trend indication is, what also calls this particular report’s effectiveness into question—not the researchers’ fault, of course—is that it is not, as the title says, “A survey of 60,000 writers.” It’s a survey of only 2,759 people who responded. According to the report, 57,241 people in some area of writing who are believed to have been reached by the survey, did not take the chance to answer it. And that, too, shows a sharp decline. It’s about half the number of the 5,500 respondents reported in the 2018 survey, which was said to have been offered to 50,000.

What’s more, “We accepted partial responses as valid observations,” the researchers write. “The numbers presented in this report therefore may not account for 100 percent of these 2,759 responses. As with previous surveys, due to the online format there is an inherent uncertainty as to who these respondents are (e.g., who has access to the link). As such, these response rates should be treated with caution when extrapolating to the broader population of authors. Further, due to the lack of a stable definition of an ‘author,’ we did not apply any statistical weights to make the survey more representative for the total writing population.”

You see the problem, something touched on by Charkin. We’re looking at a small segment of people the UK’s collecting society duly lists in its work as “writers.” Their endeavors in the wide field of “writing” are all over the vocational map. Only a small percentage of them are speaking up at all. Not all of those are answering fully. And even those answering are doing so amid the researchers’ “uncertainty as to who these respondents are.”

At the Society of Authors, CEO Nicola Solomon and her team work steadily to promote the place and position of people in writerly occupations. Again through no one’s fault, it’s an unwieldy task with myriad categories and dynamics, many of which don’t align themselves with each other easily, if at all. 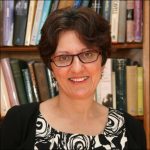 “We’ve seen many initiatives to diversify the voices and stories that are published,” Solomon says, “and to ensure that a career as an author is not the preserve of a privileged few. Today’s figures show just how far we are from achieving that. It’s tougher today to make a living as an author than it was at the time of the last ALCS income survey in 2018, when the reported median income was 50-percent higher.

“My hope is that the 2022 report will be a wakeup call to the industry to ensure a better deal for authors–through fairer contracts, higher advances, better payment terms, and a review of today’s publishing economics, which clearly work for some, to ensure they work for creators.”

“It’s tougher today to make a living as an author than it was at the time of the last ALCS income survey in 2018, when the reported median income was 50-percent higher.”Nicola Solomon, Society of Authors

The industry’s broader hope, however, needs to be that more viable research formats can be developed and employed than surveys sent to approximately 60,000 people that attract responses from self-selecting samples of fewer than 3,000, and not all of those complete. There’s no lack of good intention here, and the need for quantification is obvious. But the mechanism—again, no one’s fault and certainly not the writers’ fault—is not up to the task. Those who struggle to make ends meet in the field may be understandably frustrated when they hear that detailed survey work of this kind is not fully convincing. And yet, it’s also understandable why this is often the response. It’s not a lack of concern. It’s a lack of clarity.

So now may be the time for the Society of Authors, the CREATe team, and ALCS to start working on a different research protocol for the next round: a more rigorous paradigm that can embrace the breadth of the field, produce a scientifically selected study, and render more decisive results than these broad surveys of small, self-selecting samples have been able to do.

Such an effort could, in fact, elicit publishers’ responses in a parallel inquiry. Their input could help illuminate the responses of the many classifications of writers trying to work in what simply is not “the profession,” but many professions. Those laboring in these professions—and those who care about them both as creative people and as part of the cultural construct—might then have a more actionable picture of the field and its challenges.