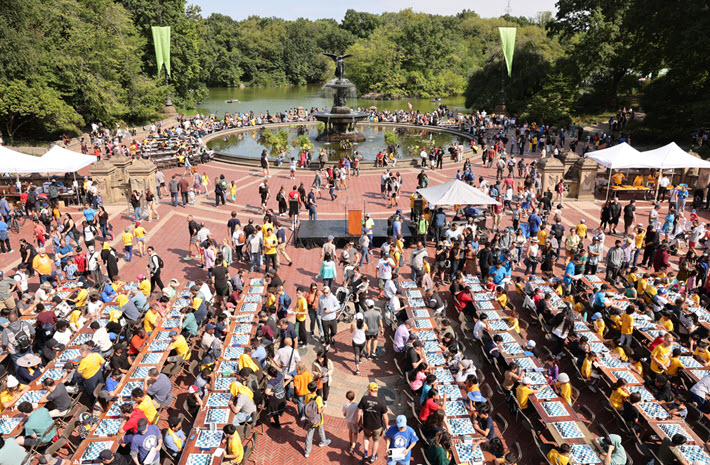 In its data released today, AAP sees the US book industry’s overall revenue down 1.4 percent in September, compared to a year earlier.

In its September 2022 StatShot report released this morning (December 5), the Association of American Publishers (AAP) cites total United States sales revenues across all categories excluding PreK-12 were down 1.4 percent by comparison to September 2021, at US$1.4 billion.

Year-to-date revenues, the AAP reports, were down 4.5 percent at US$9.3 billion for the first nine months of the year.

It’s interesting to review where things were relative to the still-ongoing coronavirus COVID-19 pandemic in September 2021. As of September 22, the first SARS-CoV-2 vaccination booster was given the green light in the States.

The Food and Drug Administration amended the emergency-use authorization for the Pfizer-BioNTech COVID-19 mRNA vaccine, allowing it to be used to boost the efficacy of the two initial-vaccination injections. The booster at this point was offered only to American residents aged 65 and older and to people 18 through 64 who were either at high risk of severe illness or with occupational exposure to the virus in medical work and other professions.

As Publishing Perspectives readers will recall, the StatShot program eventually would estimate that the American market had gained 12.2 percent in 2021 overall with calendar-year 2021 revenues at US$15.4 billion.

The AAP’s numbers reflect reported revenue for tracked categories including trade (consumer books); higher education course materials; professional publishing; and university presses. Once more, PreK-12 figures have not been made available because of delays in data collection. 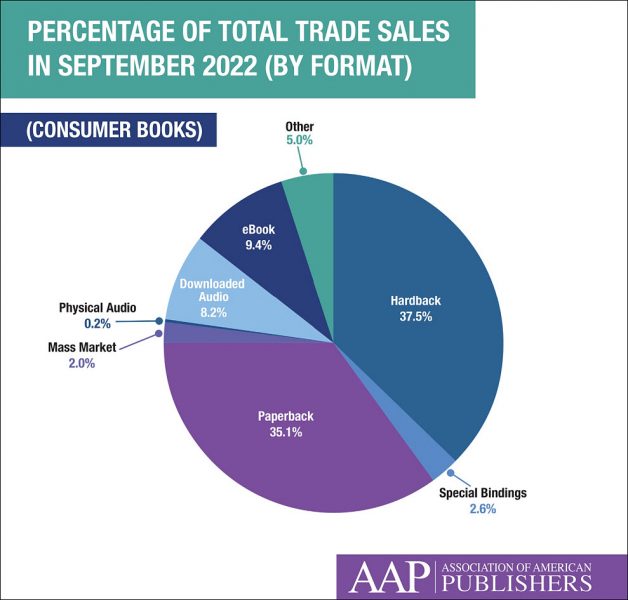 In the consumer books that make up the trade, sales were down 2.6 percent in September, with a revenue point of $917.5 million

Year-to-date, the industry’s trade revenues were down 3.6 percent, at $6.5 billion for the first nine months of the year.

Religious press revenues were down 3.6 percent in September compared to the same month in 2021, coming in at $67.4 million.

On a year-to date basis, religious press revenues were down 6.1 percent, reaching $522.3 million.

During September, revenues from higher education course materials were up 1.5 percent compared to September 2021, coming in at $450.4 million.

Year-to-date higher education was down 6.7 percent, at $2.4 billion compared to the first nine months of 2021.

Professional books, including business, medical, law, technical and scientific products, were down 13 percent during the month, coming in at $35.5 million.

Year-to-date professional book revenues were $318.4 million, down 5.3 percent as compared to the first nine months of 2021.

We’ll quote here the methodology information, as usual, for this report. We’ve edited only slightly, to minimize promotional language and to do away with a few institutional capitalizations.

“AAP StatShot reports the monthly and yearly net revenue of publishing houses from US sales to bookstores, wholesalers, direct-to-consumer, online retailers, and other channels. StatShot draws revenue data from approximately 1,368 publishers, although participation may fluctuate slightly from report to report.

“Monthly and yearly StatShot reports may not align completely across reporting periods, because the pool of StatShot participants may fluctuate from report to report, and because as with any business, it’s common accounting practice for publishing houses to update and restate their previously reported revenue data. If, for example, a business learns that its revenues were greater in a given year than its reports first indicated, it will restate the revenues in subsequent reports to AAP, permitting AAP in turn to report information that is more accurate than previously reported.”