The 2022 National Book Awards fundraising gala was a boisterous and profound coming-back-together after two years of digital editions. 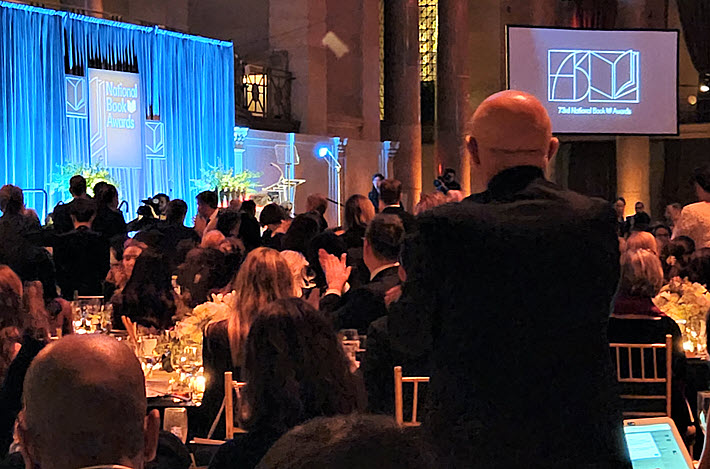 Hall and Spiegelman Honored by Kendi and Gaiman

Warmed by their own pleasure in being together again in person—after two years of coronavirus COVID-19 pandemic-driven digital editions—the donors and guests braved a long but efficient coat-check line just past the red carpet and made it a night filled with cheers and standing ovations.

With the fundraising gala re-seated in the opulence of Cipriani’s Romanesque columns, they were reminded that the five books honored had been chosen from a total 1,722 titles. 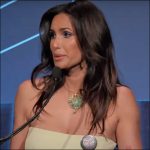 When host Padma Lakshmi reached the stage to welcome the audience, it became clear that the evening would be buoyed on sharp condemnations of contemporary book-banning efforts and associated censorship cases, including some of the politics (“Don’t Say Gay”) that Florida Gov. Ron DeSantis has promulgated.

“I don’t want my daughter to be shielded from history,” Lakshmi said. “I want her to have access to what was missing from my classrooms.” Pointing out the heady mix of books in this year’s competition, she said, “Diverse creative voices … most crucially give us a more robust rendition of what it means to be human.” 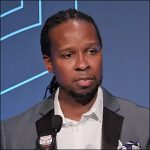 In coming to the podium to present the Literarian Award for Outstanding Service to the American Literary Community to Tracie D. Hall, National Book Award-winner Ibram X. Kendi recalled being at the event for his own award in 2016 when the late John Lewis was honored for his  March: Book Three, the third of four installments in a graphic novel series on the US civil rights movement. Lewis’ comments on receiving the award remain, even now, among the most affecting on record. 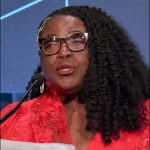 On Wednesday evening, Hall picked up on Lakshmi’s criticism of political book-banning forays in the United States, saying, “Our democracy depends on people having the right to think and read and share their stories openly. … Remember: Free people read freely.”

Next, Neil Gaiman, on hand to present the Medal for Distinguished Contribution to Maus author Art Spiegelman, told the audience about meeting Spiegelman, and watching as the writer-illustrator went on eventually to win a special Pulitzer Prize. 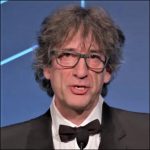 Having established that he has enjoyed a long, supportive friendship with Spiegelman, Gaiman pointed out that his own American Gods has been banned, and said of Spiegelman—who has taken many years of criticism for the Holocaust graphic-narrative Maus books, of course—”He’s one of the kindest people I know. He’s one of the wisest people I know. He is in every way a mensch. He is a New Yorker; he is a citizen of the world. He is a maker of comics that redefined what comics were capable of and how they were perceived. It changed the level of respect that comics got.” 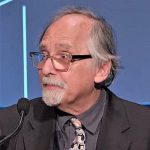 Spiegelman responded with characteristic humor, “Nothing like a lifetime achievement award to make me feel like my life may be over.”

His typical wry humor putting across his comprehension of how graphic narrative can rile those who fear its content, he gamely panned a recent Tennessee school district’s move against Maus as a case in which, “Everyone just wanted a kinder, gentler Holocaust to teach–as well as wanting to control thought and maybe eviscerate trust in public education so that tax money can be diverted toward private and religious schools.”

Minutes later, he quipped, “My year culminating in this award has been really sobering. I’d always vowed to not become the Elie Wiesel of comic books.”

And with the lifetime achievement awards handled, the evening turned to the five book-category awards. We’ll include here each category’s shortlist for you. 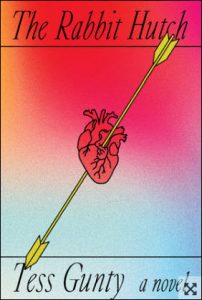 Tess Gunty was named the winner in the fiction category for The Rabbit Hutch from Penguin Random House / Knopf.

In her comments, Gunty spoke without notes. She said she’d prepared none because she didn’t think it was possible that she’d win. And yet she was poised and elegantly well-spoken, deeply complimentary to her fellow shortlistees, talking of how their works, “as different as they may be, attend to those who are structurally neglected and the humanized experiences that are not visible normally.

“I want to thank them for putting their books into the world and everyone who helped them do that. … 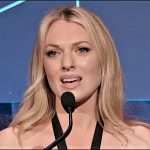 “I truly believe that attention is the most sacred resource that we have to spend on this planet, and books are perhaps one of the last places where we spend this resource freely and where it means the most. …

“I think kindness wins. I think that’s the point of this evening. Love wins.”

Here’s the shortlist in the Fiction category:

Publishers submitted a total of 463 books for the 2022 National Book Award for fiction. Our report on the longlist is here. 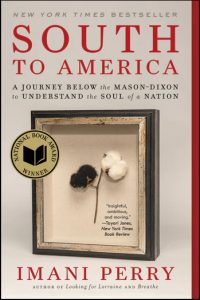 Imani Perry’s win for South to America: A Journey Below the Mason-Dixon to Understand the Soul of a Nation from HarperCollins / Ecco drew a thunderous roar of approval from the audience, which quickly became a raucous contrast to the studied, crystalline quietude of her comments. 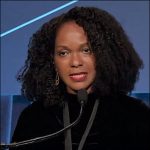 By the end of her remarks—as much a meditation as a speech—the audience was mesmerized, gently stunned by Perry’s cadences and imagery.

“We may write in solitude, but we labor in solidarity … Community is never easy but absolutely necessary. Let us meet the challenges of a broken world together, making intercessions with love unbound and heart without end. Ashay, amen, ameen.”

Here’s the shortlist in the Nonfiction category:

Publishers submitted a total of 607 books for the 2022 National Book Award for nonfiction. Our report on the longlist is here. 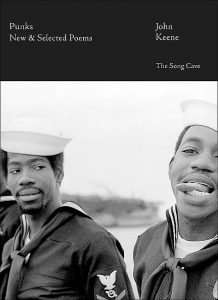 In poetry, John Keene won the 2022 award for his Punks: New & Selected Poems, published by the Song Cave.

And in case you find the cover image on Punks provocative, so do many others. In going through his thanks, Keene made a special point to acknowledge the Alvin Baltrop Trust for making it possible to use the photo you see on the cover.

Baltrop (1948-2004) was a Bronx-born photographer who started taking photos of his fellow servicemen in Vietnam. You can read more about his work at the trust’s site.

The shot you see is an excerpt from an image taken between 1969 and 1972 and called Three Navy Sailors. It was printed in 2011. 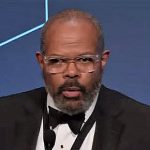 Keene said, “I want to dedicate this award to my readers and to my ancestors on whose shoulders I stand,” making a reference to “the Black, gay, queer, and trans writers, especially those we lost to HIV AIDS in the 1980s and 1990s.”

Having met many of them, Keene said, he knows that “they were brilliant, they were fierce, they were original, they were daring, they were courageous, and their voices not only captured the world they were living in, but envisioned a better one.”

Here’s the shortlist in the Poetry category:

Publishers submitted a total of 260 books for the 2022 National Book Award for poetry. Our report on the poetry longlist is here. 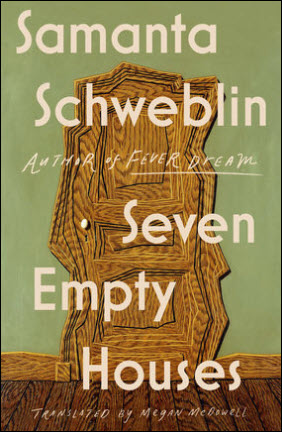 In the newest of the book awards given by the National Book Foundation, the translation category, the honor went to Seven Empty Houses by Samanta Schweblin. This is a book translated from Spanish by Megan McDowell, and published by Penguin Random House/Riverhead.

Schweblin is the author of the novel Fever Dream, a finalist for the International Booker Prize, and the story collection A Mouthful of Birds, longlisted for the same prize. Chosen by Granta as one of the 22 best writers in Spanish under the age of 35, her books have been translated into 25 languages, and her work has appeared in English in various commercial media including The New Yorker and Harper’s. Originally from Buenos Aires, Schweblin lives in Berlin.

McDowell lives in Chile and has seen her translations published in media including The New Yorker, Harper’s, and The Paris Review. 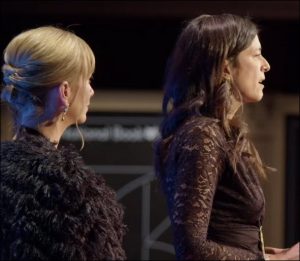 Following Schweblin’s brief words of gratitude—”I’m a short story writer, so I’m going to be very short”—translator McDowell said, “Writers are people who struggle with words, and so are translators.

“I always say that any act of communication is an act of translation.

“And I’ve learned so much from the way my writers communicate—and the way they translate.”

Here’s the shortlist in the Translated Literature category: 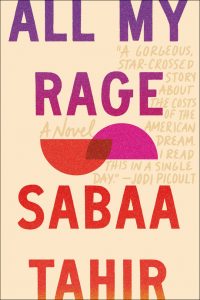 Sabaa Tahir won the 2022 award for young people’s literature, for her All My Rage, published by WW Norton. She also won the hearts of the gala’s audience at Cipriani in an emotional acceptance speech balancing anguish and comedic timing.

“I am the first Muslim and Pakistani American woman to win this award in this category,” she said. “So I must honor my Muslim sisters in too many places to count who are fighting for their lives, their autonomy, their bodies, and their right to live and tell their own stories without fear. Sisters, may you rise, and may you be victorious against the oppressors.” 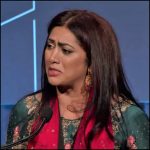 Later she’d thank her agent and other associates for “supporting me through so many blown deadlines—including the next one, I’m sorry.”

Tahir concluded saying, “Thank you to every librarian and educator and bookseller who has put my work into the hands of a young person who needs it.

“And last [thanks to] my beautiful readers, who have told me my books made them feel less alone. You make me feel less alone,” she said. “I have been a misfit and an outcast and lonely and lost but when I read for you, I am none of those things.”

Here’s the shortlist in the Young People’s Literature category:

The jurors for this one are Becky Albertalli, Joseph Bruchac, Meghan Dietsche Goel, Jewell Parker Rhodes (chair), and Lilliam Rivera.

Notes on This Year’s Presentation

The National Book Awards’ gala returned this year with no less enthusiasm than before the onset of the pandemic’s complications, and yet it remains an event covering a lot of content in what turns out to be a rather long evening, even before the after-show party dancing arrives. 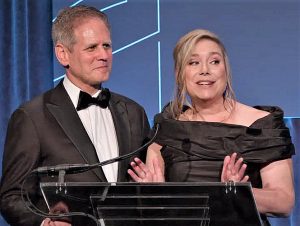 Organizers made a wise move this year, having attendees get to their desserts before the program actually began. That took away the awkward dinner pause that used to arrive between the presentations of the lifetime achievement awards and the book awards. Nevertheless, the show’s structure still could use some pruning.

Each of the five category awards, for example, is introduced by a celebrity who isn’t at the event. Christiane Amanpour, Alicia Keys, and Keanu Reeves, for example, were heard expertly reading three of the five introductions this time. And while those contributions to the event were appreciated, without a live appearance, those five intros became moments when many attendee-donors started looking at their watches.

Nevertheless, little could have dampened the pleasure with which this devoted audience returned to their in-person evening, and National Book Foundation board chair David Steinberger announced at the midpoint that US$920,000 of the night’s goal of $950,000 had been raised. Executive director Ruth Dickey, onstage with Steinberger, said that the foundation has a strategic plan for the next two years, to deliver a a strong 75th anniversary.

This is Publishing Perspectives’ 195th awards-related report in the 208 publication days since our 2022 operations began on January 3.