‘A Teller of True Stories’

In Montricher today (November 23), the Jan Michalski Prize for Literature has gone to Taina Tervonen for Les fossoyeuses, published last year by Éditions Marchialy. The title translates to The Gravediggers. And Fondacion Jan Michalski‘s 50,000-Swiss-franc honor (US$53,005), in the jurors’ words, recognizes “the great sensitivity with which the author, in an incredibly powerful book, takes up the painful subject of mass graves in Bosnia-Herzegovina.

The timing of this announcement is darkly poetic. We’re more sensitized to the traumas of wartime atrocities this year because of the depravity of Vladimir Putin’s assault on Ukraine.

“Les fossoyeuses,” we read in the jury’s rationale from Switzerland, “brings to light the need to do the work of identifying the victims of a war whose consequences can still be felt, even if deliberately forgotten by the rest of Europe. 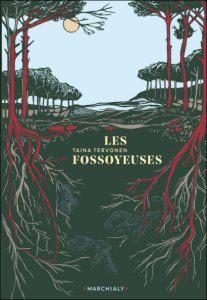 “Weaving together field investigation, sensitive portraits, travel log, and cultural and political history, her narrative and its subtle polyphony offer an original understanding of the postwar situation in the Balkans, in particular the duty to remember, when naming bodies makes it possible to soothe hearts.”

As many Publishing Perspectives readers will know, the Finnish-born Tervonen, raised in Senegal, works in both the Finnish and French media from her base in Paris. She’s not only a journalist but also a translator, a documentary filmmaker, and what she likes to call “a teller of true stories.”

More about the book from the Michalski program: “Her book takes shape around a series of visits the writer and journalist made over the course of a decade to Bosnia-Herzegovina, retracing a war that devastated the Balkans between 1992 and 1995 and led to nearly 100,000 deaths and tens of thousands of persons reported missing.

“The remains of 10,000 of the missing, the ‘disappeared,’ had not yet been found in the early 2010s, when the book opens, and many mass graves still hadn’t been investigated. To return at least a modicum of dignity to the victims, who were killed not only by the arms of the Serb militias but also through the negligence of the countries of Europe, and allow the affected families to mourn and perhaps close the circle of grief, such is the mission of Senem Škulj and Darija Vujinović , two women who are employed by the International Commission on Missing Persons (ICMP), an intergovernmental organization founded in 1996.”

Much of Tervonen’s work seems to be chosen with the same individualist authority with which a stage auteur fashions her projects.

She has written several books and has created film works from her long-term investigations, including:

In addition to the cash prize, Tervonen is being awarded two silver prints by the Finnish photographer Pentti Sammallahti—Delhi, India, 1999 and Przevorsk, Poland, 2005, both from the series On Birds. Clearly, the sooner an English translation of Tervonen’s Les fossoyeuses is published, the better.

The jury for the Michalski Prize, of course, is led by Vera Michalski-Hoffman, who joined us in May in a panel at the Jerusalem International Book Forum called Reframing Cultural Assumptions: Women, Identity, Diversity, and the Road Ahead for Publishing. It was a pleasure to have her in our discussion, knowing that her founding in 1986 of Editions Noir sur Blanc had been focused on connecting between people in Europe at the time of the iron curtain. 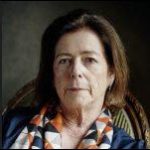 When she wrote a few lines to this reporter ahead of her appearance in Jerusalem, Michalski-Hoffman clearly was very much in touch with the resonance that now can be found in the prize’s selection of Tervonen’s work. “Questioning our cultural assumptions is essential in present times,” she wrote, “confronted as we are with a challenging world  environment : war, refugee streams, profound change on the geopolitical scene.

“If a publisher thinks he can provide answers to a puzzled readership, it seems like a historical moment.”

The gravity of her experience and viewpoint now is reflected, of course, in the work that she and her fellow jurors have done in choosing Les fossoyeuses. Those jurors on her panel (they rotate in three-year increments) are British novelist and biographer Jonathan Coe; journalist and writer Carsten Jensen; Kapka Kassabova, author, poet, and narrative nonfiction writer; the French novelist, visual artist, and film director Valérie Mréjen; and the French war reporter, journalist, and writer Anne Nivat.

Two finalists were considered with Tervonen for the prize this year:

This is Publishing Perspectives’ 197th awards-related report in the 212 publication days since our 2022 operations began on January 3.