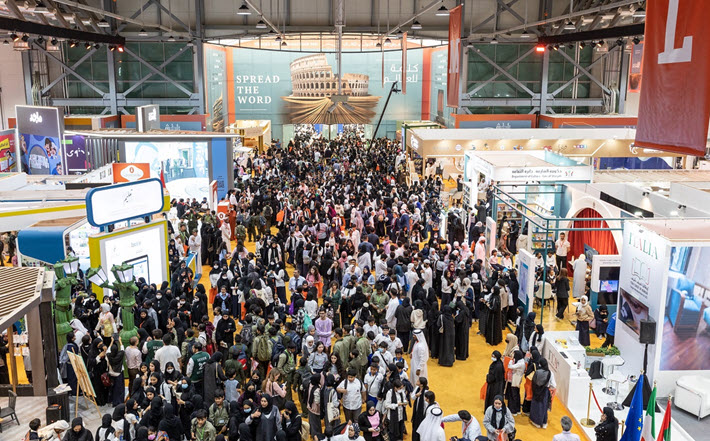 As many as 112 nations reportedly were represented in the 2022 Sharjah International Book Fair attendance, according to organizers.

On the main concourse of the 2022 edition of Sharjah International Book Fair. Image: SIBF

Having closed its 12-day run under this year’s theme, “Spread the Word,” the 41st edition of Sharjah International Book Fair reports drawing 2.17 million visitors from 112 nations.

The show opened with its three-day professional program, the 12th Sharjah Publishers Conference, just as Judge Florence Pan panned the proposed Simon & Schuster acquisition by Penguin Random House with PRH worldwide CEO Markus Dohle on-hand in Sharjah as a speaker. Dohle’s first response to the news came during his scheduled onstage interview with Bodour Al Qasimi, the outgoing president of the International Publishers Association (IPA) and a highly influential publisher, herself, based in Sharjah.

If the confluence of Dohle’s presence, Pan’s ruling, and the conference tended briefly to eclipse the opening of the show in Sharjah, it certainly provided the kind of visibility for a book fair that money cannot buy.

In fact, Dohle was asked by Al Qasimi if his presence meant that Penguin Random House would be developing a specific presence there. His answer, while indicating that as many as two generations would be needed to see such activity come to full fruition, was later bolstered in a local Pulse95Radio interview, in which he spoke of the “energy” in the region and its publishing industry. He said he was “super-impressed with the balance” underway in which the Book Authority is “trying to grow the local publishing business and coupling that with this huge international representation.” 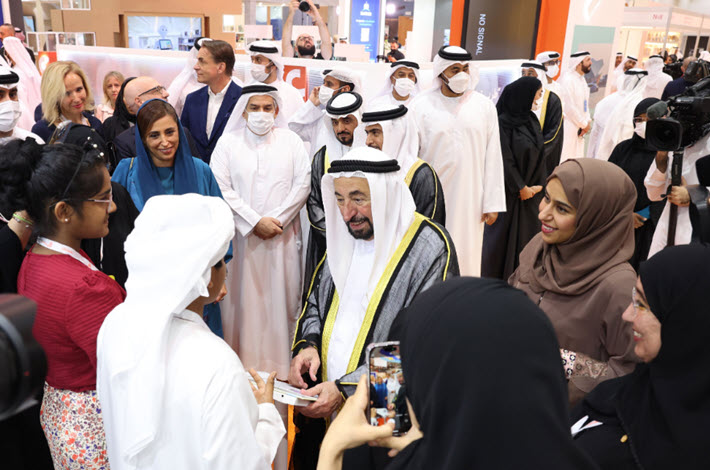 Once the Sharjah book fair’s formal and typically opulent laser-lit opening ceremony had been led by the author-emir Sheikh Sultan Bin Mohammed Al Qasimi, the show could get under way, its publishers conference completed and a reported 218,000 students ready to be part of that big turnout for 2,213 publishers on the exhibition floor at the Sharjah Expo Center. In fact, during the fair, Sheikh Sultan made an allocation of 4.5 million dirhams (US$1.2 million) specifically to boost his emirate’s libraries’ collections with the newest titles offered this year by both the regional and international publishing houses present on the exhibition floor.

Sharjah—the United Arab Emirates’ third-largest state—has been led for decades by Sheikh Sultan, who has determinedly and generously developed the reading culture there. The armada of school buses that arrives each year at the book fair is a clue both to the educational importance of this seminal program in the Middle East and of its function as part of the sheikh’s plan to cultivate a population deeply committed to the habit of reading. What you frequently hear, particularly among newcomers to the professional publishers’ conference is, “Why can’t more places be like this?”

Of the exhibiting publishers offering their wares this year, 1,298 are reported to have been from the Arab region, and 915 from other international markets. By the show’s conclusion on Sunday (November 13), the program had hosted at least 150 authors, intellectuals, celebrities, and other speakers, whose appearances were part of a reported 1,500 or more events, at least 200 of them involving workshops, talks, and/or seminars. 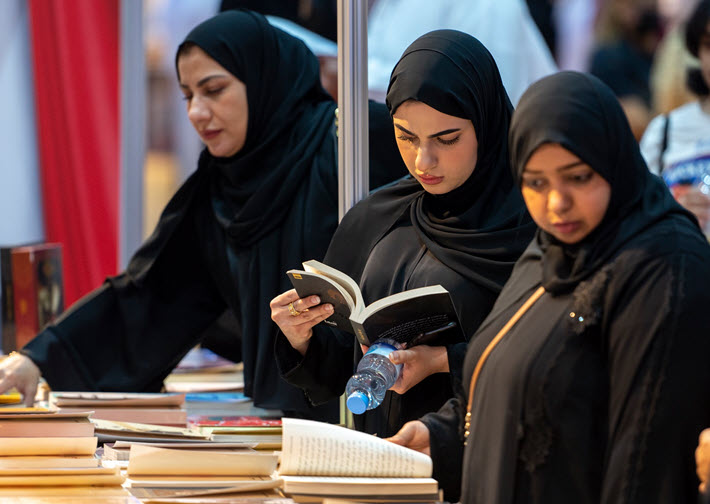 In terms of age, that total 2.1 million-person figure is broken down into two groups by the fair’s producer,  Ahmed Al Ameri‘s Sharjah Book Authority, as:

In gender, the breakdown offered is: 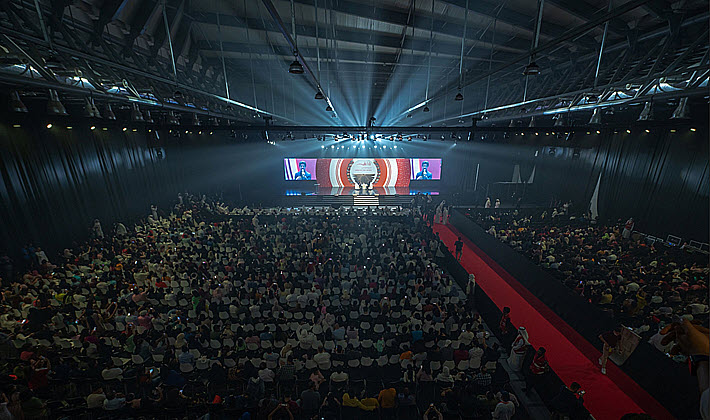 Among special appearances were:

Progress in the development of Sharjah’s free trade zone for the book business, Sharjah Publishing City, was also highlighted with the news that 26 publishing houses have signed up recently to place operations there. They represent Egypt, Syria, Lebanon, Jordan, India, the United Kingdom, Morocco, Algeria, Tunis, and the United Arab Emirates.

Seemingly astronomical social-media numbers also are being reported, including 38 million impressions on the fair’s accounts, and engagement by more than 18 million users. The hashtag #SIBF22 is said to have created 78 million impressions, and was being used, naturally, in both English and Arabic. 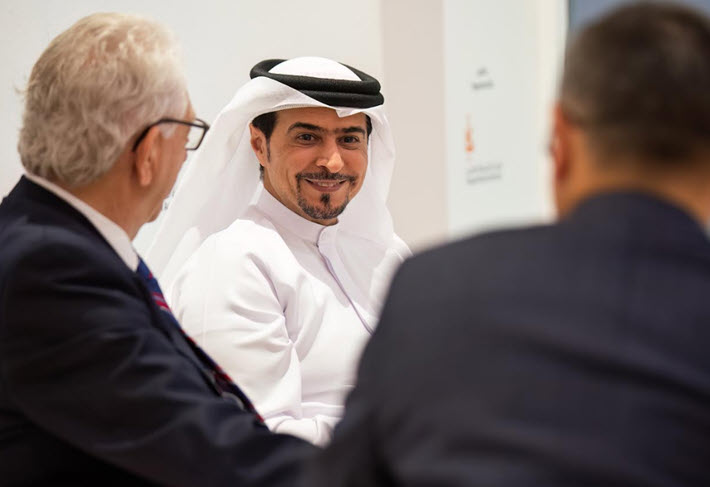 Al Ameri, in a statement on the closing of the 2022 fair, says that the 2.17 million visitors to the fair “are not mere visitors but ambassadors who carry forward the message and vision of Sharjah Book Authority, and the emirate’s cultural project that was founded five decades ago by His Highness Sheikh Dr. Sultan bin Mohammed Al Qasimi, which has grown and borne fruit, the latest of which is the recognition as the world’s largest book fair for the second year in a row.”

His reference to the size of the fair is based on a count of 1,041 trading tables, he tells Publishing Perspectives. That’s so many tables, in fact, that he noted they couldn’t all be deployed at once, and a “flexi-table” system of renumbering tables was used for Publishers Conference participants. As Dohle pointed out in his radio interview, the sight of Sharjah’s sea of little white tables is captivating, and those of us who remember earlier years’ trading on the first floor of Sharjah’s Chamber of Commerce know that the growth in recent years has been enormous.

Needless to say, the size of a trade show is not based simply on table space, but also on whether a table is provided by a fair or specifically paid for by its traders; the hard-to-assess transactional results of a rights-trading program, which can take months to calculate as the outcome of meetings plays out; the overall number of paying professional trade visitors and exhibitors at a fair; the number of visits to a trade floor by those visitors for meetings with table-renting trading agents; and other factors of scale and industry, such as the trading activity on exhibitors’ stands, and the size and range of organizations paying for the opportunity to trade and/or exhibit.

Al Ameri’s point, however, is that such a space as the Sharjah Publishers Conference tent carpeted by its hundreds of small white tables does create an extraordinary picture of the importance to international publishing of rights trading. And in the past two years, he has provided that image twice–this year in an even bigger tent than last year. If anything, Sharjah International Book Fair is likely the largest event of its kind in the Middle East and Africa, an admirable achievement of which Sharjah is rightly very proud.

“One of the core goals of the book fair,” Al Ameri says, “is to raise awareness of the importance of reading and build communities that believe in the value and impact of books.

“We have achieved this goal to a large extent. Our goal is to transcend the idea that reading is an activity for intellectuals only. At Sharjah Book Authority, we believe that reading is for all segments of the community whose interests span across varied fields like music, cinema, sports, architecture, fashion, and any other. This was reflected in the diversity of Sharjah International Book Fair guests in the 41st edition: their relationships with books was evident during their participation at the event.” 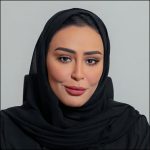 To Al Ameri’s comments, the show’s general coordinator, Khoula Al Mujaini, adds that the fair’s “vibrant agenda of  activities  in its 41st edition offered a comprehensive experience that attracted visitors and distinguished artists, sportsmen, and authors from all around the world.

“The high footfall is a clear indicator of the status and importance of the international book fair,” she says, “in meeting the demands of its guests, regardless of age and nationalities.”

Next, Sharjah follows its own fair with its appearance later this month as guest of honor at the Guadalajara International Book Fair. 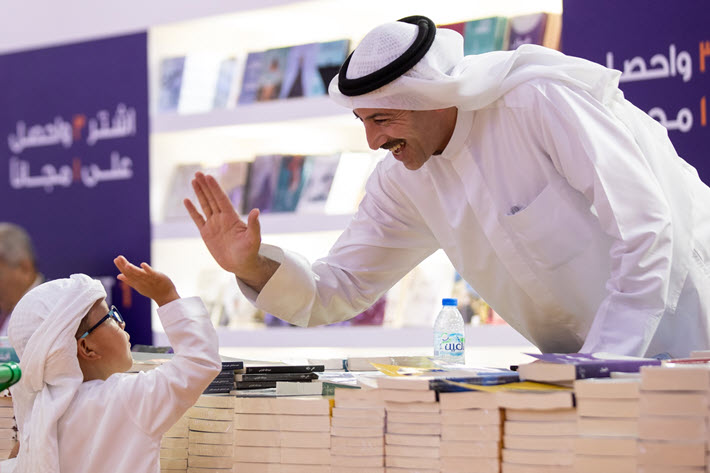 A publisher and his patron at Sharjah International Book Fair 2022. Image: SIBF

More from Publishing Perspectives on Sharjah Publishers Conference is here,  more on Sharjah Book Authority and its programming is here, more on the just closed 2022 edition of Frankfurter Buchmesse is here, and more on publishing trade shows, book fairs and conferences internationally is here.

Our Frankfurter Buchmesse Show Magazine now is out for our entire readership in a free digital download for our world readership online. The magazine originally appeared in print on the Messe Frankfurt as Frankfurt Book Fair opened October 19. The magazine has extensive coverage of issues and trends that are leading discussions and debates at the trade show this year, along with interviews, profiles, and commentary in this strongly attended Frankfurt year. Click here for your download (PDF).