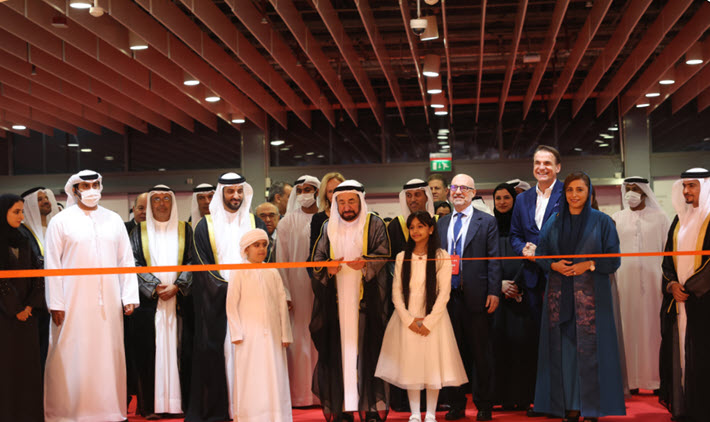 See also:
The PRH-S&S Acquisition Case Goes to Court in the States
Markus Dohle on the PRH-S&S Ruling: ‘Utterly Wrong’

By evening’s end, Sharjah’s author-emir, the Sheikh Sultan Bin Mohammed Al Qasimi, had led an invited audience of hundreds in the traditional laser-lit pageantry of a spectacular opening ceremony for the 41st Sharjah International Book Fair (November 2 to 13).

During course of the conference day, there were several standout moments in a series of discussions, curated by consultant Emma House in cooperation with Ahmed Al Ameri and Mansour Al Hassani at Sharjah Book Authority.

Translation Rights and the World Industry 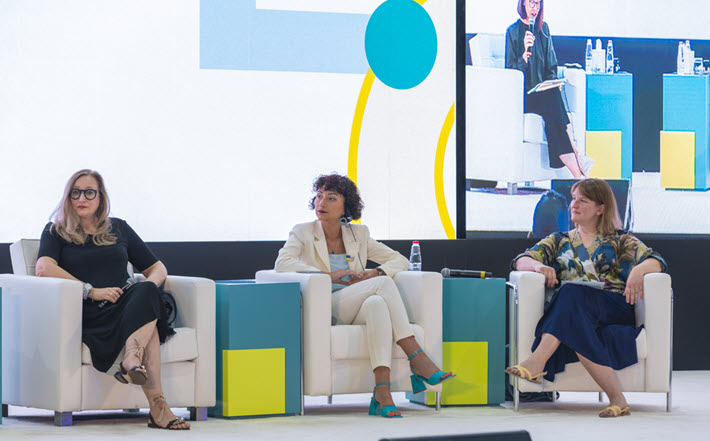 At the Sharjah Publishers Conference, Georgia’s Gvantsa Jobava, center, speaks with Sarah Hemens of New Books in German and with Zanete Pasqualini, of the Latvian Literature platform on ‘Promoting a Nation’s Literature for Translation.’ Image: SIBF, Nabs Ahmedi

In a presentation on “Promoting a Nation’s Literature for Translation,” Gvantsa Jobava of the Republic of Intelekti Publishing in Georgia—the 2018 guest of honor market at Frankfurter Buchmesse—spoke of how critical it can be for a smaller nation and/or language to have access to international translation-rights trading.

“We are still largely an undiscovered country,” she said, “and are working actively to attract foreign publishers to experience our literature and make it more visible in the global realm.”

Also speaking in this session on translation, Sarah Hemens of the New Books in German project, said, “Experimentation is the key word in improving our industry. We’ve set up a dedicated easy-to-navigate site for international publishers to find and collaborate with us as we seek to improve and increase our title numbers.

“The platform is organized with detailed summaries and genres, and translation fundings are guaranteed once we sign contracts.” 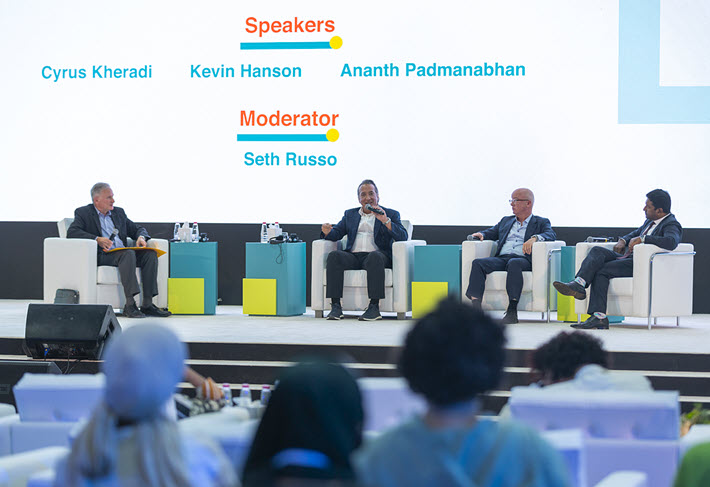 Also of interest was a session moderated by industry consultant Seth Russo and focused on the “global vs. local” question of how, particularly in large multinational publishing organizations, international markets’ divisions often move with healthy autonomy.

Kevin Hanson, president of Simon & Schuster Canada, told Russo that more than 60 per cent of the Canadian readership relies on imported content.

“The publishing world is a collection of people exploring authors and readers,” he said. “As a firm publishing locally, we tap into the curiosity and create engagement with our consumer readership. We build long-lasting relationships with agents, create strategies to promote them and also have independent engagements with the authors.

“Our readership is hungry for international content,” Hanson said.

“Looking at the distribution portfolio as a local publisher, I am aware of the content being pulled into the Canadian market. Informational flow and connectivity with counterparts in different offices is key in understanding readership trends. Today, more power lies within the author.

“As publishers, we’re less direct and more responsive to the consumer markets.”

Ananth Padmanabhan, familiar to Publishing Perspectives readers for his insightful leadership as CEO of HarperCollins India, said, “India has one of the largest and fastest-growing English-language readership markets with a 250-million potential—representing just a quarter of its population.

“If we focus on the diverse local reader habits, the right pricing, there’s still space for enormous growth.”

Padmanabhan said that although more than 70 percent of titles at bookstores in India are from international publishers, indigenous publishers are also a big part of the country’s complex distribution network.

“Understanding local culture and realizing that books that have the potential to resonate with larger audiences are key in such a diverse market,” he said. “While social media can gauge the changing trends, it also constantly reminds publishers that we don’t know our consumers well enough.”

While our readers are most familiar with the part of Markus Dohle‘s conversation with Bodour Al Qasimi that dealt with the court ruling on the proposed Penguin Random House acquisition of Simon & Schuster, another question from Al Qasimi to Dohle carried great interest for audience members from the Arab world.

Al Qasimi in her “fireside chat” conversation onstage asked Dohle if his presence in the United Arab Emirates might indicate that the company is lo0king for a pathway to create a PRH regional presence.

Dohle said that with publishing operations in more than 25 countries now, Penguin Random House is accustomed to visiting new regions to learn “the specific dynamics of [a given] publishing community.” He stressed that although PRH is known as the largest of global publishing concerns in the world.

“We are coming into markets through a local lens,” he said.

“We want to support local culture, local writers, local voices. … We try to learn, we try to understand, and then we start—in most cases slowly but surely—because we think in generations.

“This is indeed a starting point for me and for us,” he said to Al Qasimi. “I can see us having a quite significant publishing operation, two generations from now.” 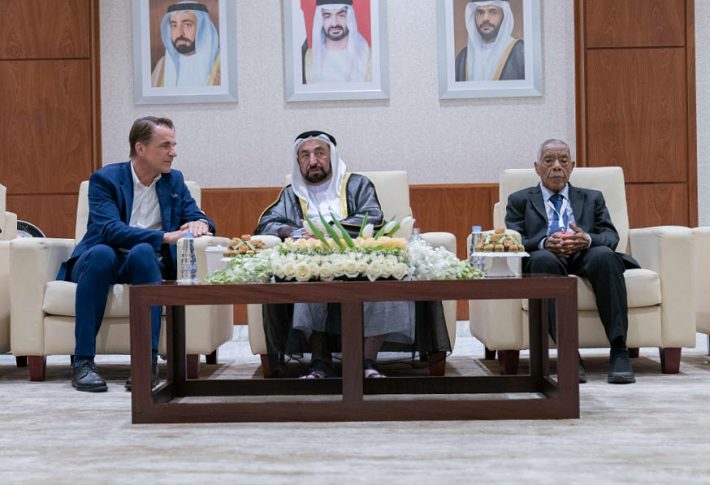 More from Publishing Perspectives on Sharjah Publishers Conference is here,  more on Sharjah Book Authority and its programming is here, more on the just closed 2022 edition of Frankfurter Buchmesse is here, and more on publishing trade shows, book fairs and conferences internationally is here. More from Publishing Perspectives on Simon & Schuster is here, more from us on Bertelsmann is here, and more on Penguin Random House is here. More on mergers and acquisitions in publishing is here.