The pandemic, branding, and geopolitical politics were on the table in Juergen Boos’ conversation with CEOs of Scholastic and Ravensburger. 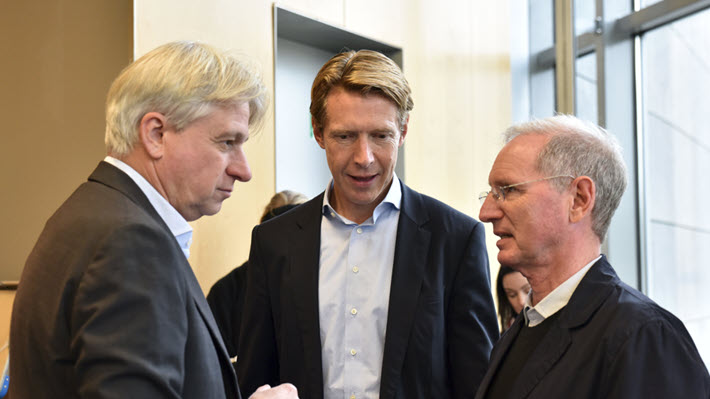 Among the two days of B2B sessions programmed for the inaugural season of our Publishing Perspectives Forum at Frankfurter Buchmesse, an October 20 discussion called “What Young Readers Need Today: Children’s Publishing CEOs in Conversation” drew a strong audience of trade visitors and exhibitors.

The two companies are interesting, of course, for some key commonalities.

Scholastic, based in the States but with deep international-market penetration, is about a century old and is widely recognized as the largest publisher in the world of its kind. Ravensburger was founded in 1883 and, at 139 years old remains focused on a range of products, not just on books, its first product actually having been a wood chip basket sold in 1884.

“Where I think we’re united and a little bit difference from many publishers,” Ravensburger’s Maier said early in the discussion, “is that [we’ve each] actually built a brand, a company brand, a recognizable brand” which may, in fact, be understood differently according to which consumer you ask about it.

“‘The parents know ‘Ravensburger,'” he pointed out, while youngsters for whom those parents are buying educational content may be more familiar with one of the company’s brands such as ThinkFun or Brio.

Warwick pointed out that there’s a parallel in the brand discussion for major companies like Scholastic and Ravensburger and the author-illustrator relationship.

“In illustrated children’s books,” he said, “it’s always a marriage” between the work of the author and the illustrator,” although he agreed with Boos that by the time a reader may be getting into the YA range of the market, there’s a good chance that she or he will be starting to recognize authors’ names, perhaps as readily as a favorite illustrator.

This creates a kind of shifting market dynamic for young readers’ work, and especially for major houses like Scholastic and Ravensburger.

“We always try to analyze as much as we possibly can,” Warwick said, “to understand exactly who is the customer: is it parents, is it the teachers, is it the child? In different circumstances, it can be it can be all of them.”

This question of market analysis and consumer insight prompted Maier to talk about “huge advances in technology and artificial intelligence that we can use in our industry, I think it’s super-exciting.

“We’re looking at things like text-to-image,” he said, “where through simple sentences, you can create images, it’s quite fascinating.”

While “the human hand is still very, very important, we see technology enabling us in many respects, with all the data analysis” that goes into good marketing by taking into account consumer reaction to products.

“Even a company of our size has to be pretty technologically savvy at this point,” Maier said.

And that, as Warwick had pointed out, is itself complicated in the children’s sector by the fact that the buyer and the reader frequently aren’t the same person. Just how text and image may affect the “consumer” can vary according to who that consumer is. 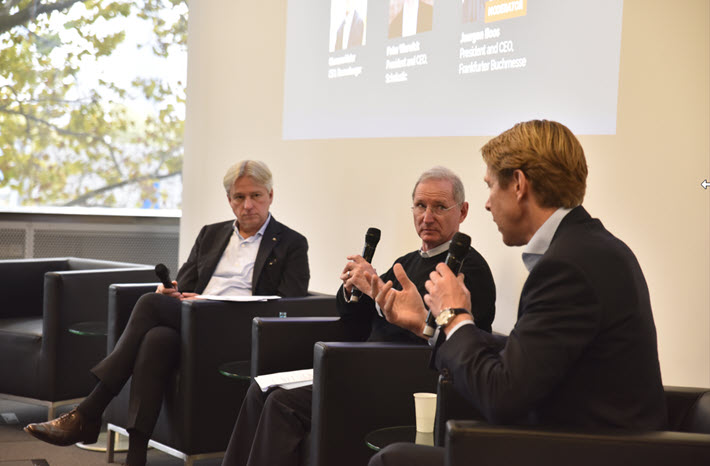 When Boos asked about interruptions in the two companies’ business as a result of the coronavirus COVID-pandemic—”which is not over yet,” as he pointed out—Warwick’s answer indicated how extensively Scholastic’s business is integrated into real-time educational access.

“We do a very significant part of our business actually on the school premises,” he said. “We weren’t able to operate [Scholastic’s] book fairs. And we weren’t able to operate our book clubs. There was nobody around for quite a few months to significantly buy educational books, either. Those, our trade books, and what we sell internationally,” Warwick said, “are the core of our business.

“So the timing of the pandemic was pretty serious,” he told Boos. “What happened was that instead of being able to do commerce, as it were, on the school premises, we did a lot more business with the booksellers and the trade, and a lot more business with direct-to-parents—being able to deliver bookshop choices to parents rather than schools. It’s now reverted back to pretty much where it was before, which is to say 85-percent book fairs,” he said—”and the fairs’ revenue is higher than before the pandemic, so that’s very satisfactory.”

On the other hand, he said, “Our trade sales have cooled a little because those books the parents might have [bought] by going to a bookstore, the kids are now getting through the book fair. So we’ve seen the switch and the switch-back.”

Warwick added that the supply-chain effects had been substantial for Scholastic, as well. Having seen a lot of books come in later than expected a year ago, “We wanted to make sure that [now] we have everything. That’s been a change from last year to this year, a fundamental change in the way our business has been organized.”

For his part, Maier noted that the two companies, though in the same business, had different pandemic experiences. “We d0n’t have these book fairs or book clubs” that Scholastic has,” he said, not least because of the emphasis on toys and puzzles inventory Ravensburger has specialized in since its founding.

“With families staying at home,” Maier said, “there was a lot of time to play and a demand for those products, semi-educational products. A good chunk of our business is puzzles.

A lot of people” who might not normally advertise their fondness for puzzles “now started puzzling and were very vocal about it. We found ourselves on the front pages of American newspapers like the Wall Street Journal. I think it was the Australian prime minister who said that puzzles are ‘a product of national need’ and that you were allowed to leave the house for that.

“In that sense, COVID was kind to us. Obviously that’s changing now. Some of that extra time is going away and we do feel supply-chain challenges that many people fear. I get the sense our whole modern global supply chain has been built for 2-, 3-, 4-percent swings, not for the 20-percent swings we’ve been seeing over the last couple of years.”

Warwick concurred with Maier on this: “The whole basis of the supply chain for many years was ‘just in time.’ And it’s now become ‘just out of time,’ really because if you’re working on a just-in-time basis, that will really have to change.”

Digital and Physical: ‘Joining Them Is Not a Great Idea’

Maier made a aside that in Ravensburger’s GraviTrax interactive construction apps, “Lots of people play it, but what we don’t do—or very rarely do—is try to mix the product experience.

“So when the issue was new, everybody was saying, ‘Wow, that is so cool.'” Some elements of the app’s operation could make it appear that an iPhone was broken, although this was simply a messaging effect built into the media.

“What we all realized, Maier said, “was that joining the experience of digital and physical in-app is not a great idea. Going with the same brand into both worlds we do think is a great idea. And then of course there’s exceptions to that because there’s some things where the screen for learning, as a supplement makes a ton of sense.”

Boos had, earlier in the day, hosted the Volodymyr Zelensky address coordinated between Frankfurter Buchmesse and the Federation of European Publishers, and it prompted him to ask a thoughtful question about how the two publishers were responding to Vladimir Putin’s aggression and the crisis for Ukraine. Could the political pressures, in fact, lead to self-censorship in these companies’ output?

“Suddenly now children are growing up in a world here where war is something that’s not that far away. How do you make sense of that with a 5-year-old?”Clemens Maier, Ravensburger

While both Warwick and Maier pointed out that they normally carry little if any Russian content or cooperative business with companies in Russia, Warwick said the main dynamic he’d seen was “a positive interest in Ukraine rather than a negative interst in Russia.”

And Maier said that, if anything, the key effect his company had observed was a new dimension of concern, “bccause suddenly now children are growing up in a world here where war is something that’s not that far away.

“And you know,” he said, “how do you make sense of that with a 5-year-old? So in that sense, it’s really filtering through our work, and we’ve been discussing it. I think that’s super-important because that’s part of what we’re here for. 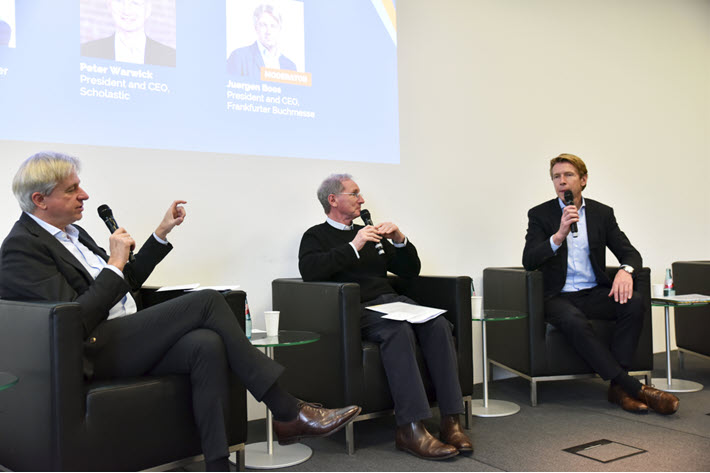