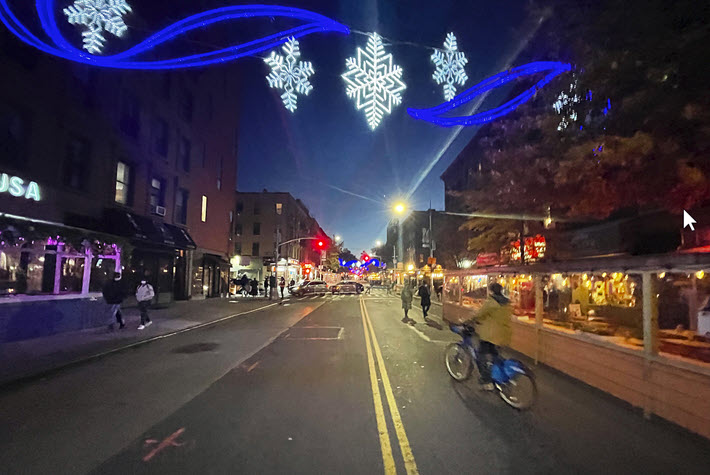 In her news release today (November 7), NPD BookScan‘s Kristen McLean writes, “It’s now clear that holiday 2022 is taking a different path from that of 2021 in the United States’ book market.

“Last week diverged significantly from 2021, heading down and ending 14 percent below the same week in 2021, as the 2021 market was already heading up into an early holiday climb.”

She highlights several data points that corroborate a slower holiday season this year:

Here’s what McLean makes of this is a kind of double-whammy, writing to the news media, “Not only are we off to a slower start behaviorally” among consumers “but we seem to be hitting a headwind relative to our year-to-date performance.”

However—and significantly—she adds, “The losses were not substantial enough to change the story yet.

And in this, she parallels points made to Publishing Perspectives by Penguin Random House worldwide CEO Markus Dohle last week during his participation at the Sharjah Publishers Conference. Even when we see a downturn in some US metrics, Dohle said, the overall market picture is up from its performance before the onset of the coronavirus COVID-19 pandemic.

The American industry, as assessed by McLean, she writes, “is still 14-percent higher than in the pre-pandemic market.”

A Question About Supply-Chain Disruptions 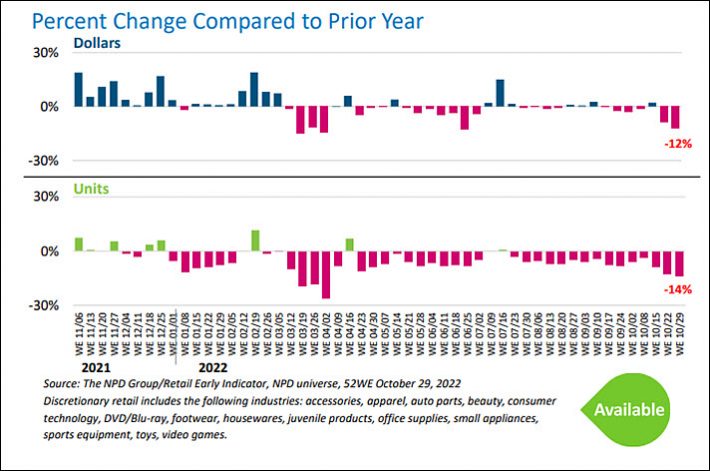 McLean notes that she’s had a question about whether the drops she’s describing in the data could be a result of the many supply-chain disruptions that the US market—and many other markets in various parts of the world—encountered during the pandemic era.

In answer, McLean points out, “We had significant supply-chain issues last year, and that didn’t stop people from buying a lot of books.

“I think this is a broader issue,” she says, is “related to consumer behavior.” NPD—which tracks retail across many industries—is seeing this trend “across all of the categories we track at NPD. I believe the lower level of spending this year,” she says, “is fundamentally about consumer economics and sentiment.”

In the NPD Group’s “Now in Retail” report, there is indeed some discussion on this trend line at the wider market scale, beyond books. “Lulls are to be expected following heavy promotional periods,” the assessment notes, “but there is more behind this week’s double-digit dip in both unit and dollar sales. Post-promotion declines in the typically high-volume industries, like technology and toys, are even more stifled by a lack of newness and innovation. Additionally, the absence of the typical seasonal weather shift across most of the country has resulted in a late start to the fall wardrobe transition, and it’s affecting struggling apparel sales.”

In addition, the approach of Tuesday’s (November 8) midterm elections is generating what may well be considerable distraction for consumers, McLean and her associates point out.

“Not super comforting,” McLean concedes, “but we’ll keep monitoring it.”

As you can see in this graphic from NPD, the four weeks ending October 29 this year show softer sales of children’s and adults’ books than the United States industry saw last year. 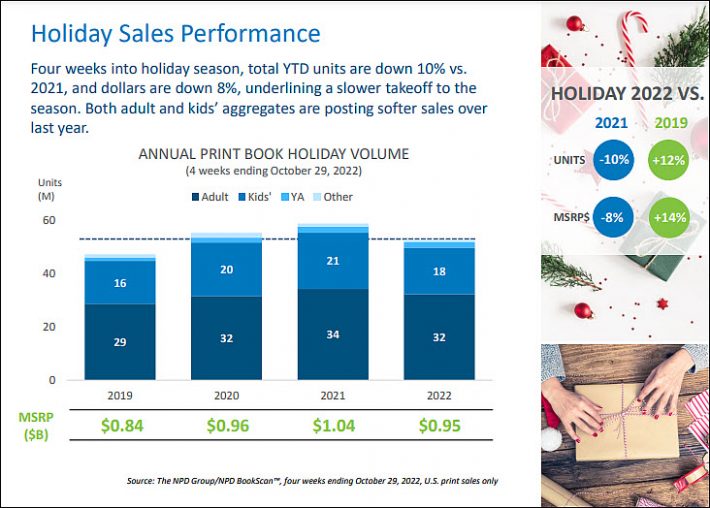 Image: NPD Group/NPD BookScan through the week ending October 29, 2022, US print sales only

And we close with McLean’s regularly informative chart, the Topline Market Performance tracked by NPD BookScan in the United States’ print market. 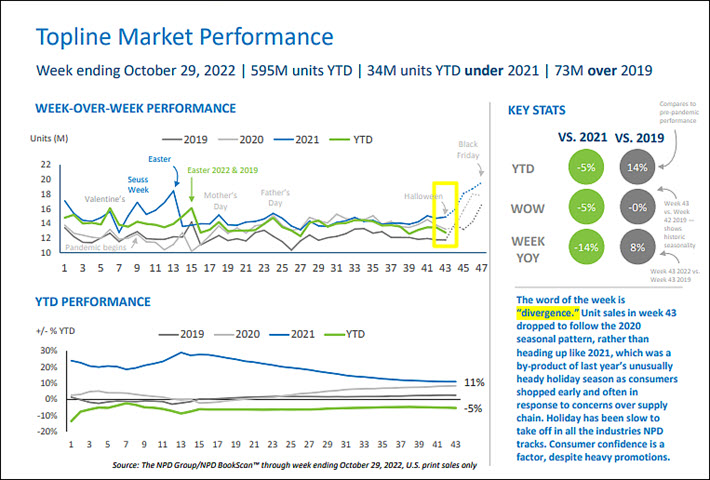 Image: NPD Group/NPD BookScan through the week ending October 29, 2022, US print sales only

Note her comment worked into the graphic this week: “The word of the week,” she writes, “is divergence. Unit sales in Week 43 dropped to follow the 2020 seasonal pattern, rather than heading up like 2021, which was a by-product of last year’s unusually heady holiday season as consumers shopped early and often in response to concerns over supply chain….

“Consumer confidence,” she writes, “is a factor, despite heavy promotion.”

And so, as she says, we keep watching for further data on US market performance this season.