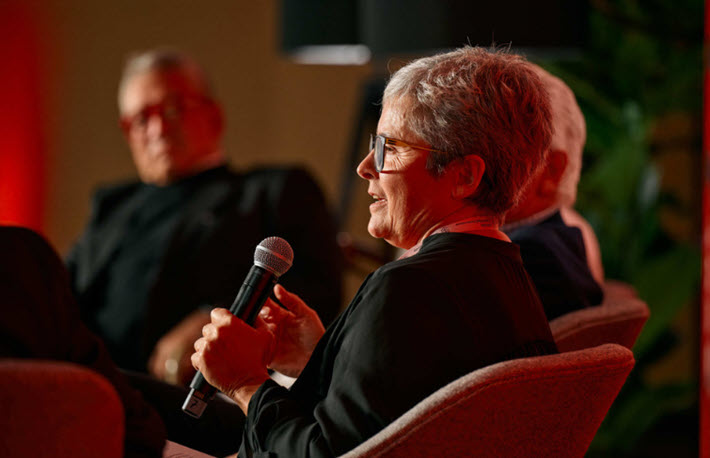 Madrid’s book fair director Eva Orúe is the first woman in the role in 80 years. And she has a UNESCO World Heritage venue to protect.

Many international book fair directors spend years developing and growing an audience. But when Eva Orúe presided over her first edition of the Feria del Libro de Madrid in May, the show drew the largest crowd in its 80-year history.

“Indeed, it was a spectacular turnout” at this public-facing book fair, Orúe tells Publishing Perspectives: 3.1 million visits were recorded.

“My colleagues told me that after two ‘pandemic fairs'” held in digital and hybrid formats, she says, “the population was left in a Ganas de feria, a ‘mood for a fair.’ And so it was.”

Orúe is the first woman to hold the position in the fair’s eight decades of operation. And as happens to many successful women in many walks of life and career, Orúe’s gender can tend to grab all the attention, something she confirmed on October 22, when she participated in a round table with other international book fair directors.

That program, moderated by Publishing Perspectives, was made possible by the support of Aldus Up during Guest of Honor Spain’s week at Frankfurter Buchmesse.

“Many ask me, ‘Were you chosen for being a woman?’ she says. “The answer is no, but it doesn’t worry me that being a woman influenced the selection committee’s decision.

“First, because for years the fact of being a man was a decisive factor, and nobody expressed their disagreement. Second, because being a woman has allowed me, over the years, a different experience from that of my male colleagues. And, third, because I think that the fair, like so many events, needs a gender perspective—as it needs other perspectives—that does not imply excluding men, but rather seeing reality from another perspective and filling in some gaps.

“That said, in a predominantly female sector” like publishing, “the strange thing is that there had not been a woman at the head of the fair before.”

And from all evidence so far, the reception of Orúe as the show’s new chief has been adamantly welcoming. “Yes, the sector has being supportive from the very first moment,” she says. “And the reaction of the media has also been spectacular.” 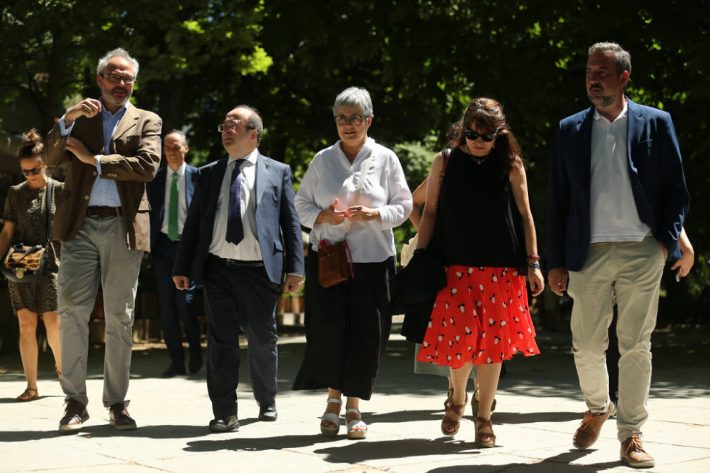 One reason Orúe is so aware of the media response is that she’s a journalist. In a long career of press work in radio, television, and print, she’s been a correspondent in the United Kingdom, France, and Russia, and more recently a regular talk-show host with SER, Onda Cero, RNE, TVE, Antena 3, La Sexta, and more.

“The fair, like so many events, needs a gender perspective–as it needs other perspectives–that does not imply excluding men, but rather seeing reality from another perspective and filling in some gaps.”Eva Orúe, Feria del Libro de Madrid

Prior to being named to the fair’s top seat, she was co-director of Ingenio de Divertinajes, a communication and content agency, working with authors, publishers, bookstores, larger institutions and non-governmental organizations (NGOs).

In July, she won the 2022 Professional Women’s Leadership Award from FEDEPE, the Spanish Federation of Female Directors, Executives, Professionals, and Entrepreneurs, and cautioned her audience at the time, “I have broken a barrier, but there are many others to break.”

She also spoke to how perplexing it is that in “such a feminized sector” as book publishing, it’s “still a surprise” when a women reaches a top executive position.

Nevertheless, a new and important chapter in the Madrid fair’s history has swung open this year, as Orúe put it at the FEDEPE award ceremony, when the Bookstore Guild, which produces Feria del Libro de Madrid, “decided to open the selection process for the first time in its history.

“Sixteen people showed up thinking we were qualified to run this crazy monster, and they chose me.”

A Massive Fair in a World Heritage Setting 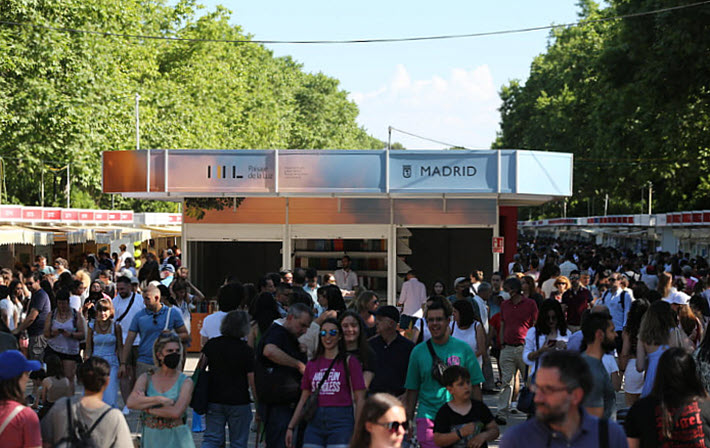 One of the reasons it’s interesting hearing book fair directors talk about their work in many parts of the world is that there can be so many common challenges—and so many unique ones.

“In Catalan, there’s a word, lletraferits, which we have translated into Spanish, letraheridos, meaning ‘those happily stricken by literature.'”Eva Orúe, Feria del Libro de Madrid

Orúe, for example, is certainly blessed to have a fair that so many fans have taken to their hearts. The show’s success, she says, “has a lot to do with the fact that the fair is a must for many people from Madrid, who consider it theirs. Many of the visitors are not shoppers” among the long, long lines of book stalls, “just walkers. Our desire is, without expelling passers-by, to attract a greater number of readers-buyers.”

And yet the very fact of that enormous level of foot traffic “poses a problem for us. Ours is a public-facing book fair, not a professional one, so visitors are the reason for the event. But the Madrid Book Fair takes place in a historic garden in a UNESCO World Heritage urban axis,” having been so designated by the United Nations’ cultural division only in June 2021, along with Madrid’s Paseo del Prado, on which stands the Prado Museum among other landmarks.

“Therefore, we must double our efforts to protect it,” Orúe says—and here come 3.1 million avid fairgoers. You see the challenge.

“In the last edition” in May, she says, “we took some steps. We eliminated the public address system, we did not print maps, we reduced the access of vehicles for the assembly and disassembly of booths and stands. The communication team worked hard to get the media to talk about the need to protect El Retiro Park, and there was no interview in which I did not answer a question about it.

“Of course, it’s up to us to do what’s necessary to implement environmental conservation measures, but we need visitors to be aware and help us as well.

“Let me add this: The Madrid Book Fair is a popular fair”—for the public, public-facing rather than a trade show—”and it should continue to be so. Its spirit is different from that of other fairs such as Frankfurt, London, or in Spain Liber, and even Guadalajara.

?This is something that the professionals know, but that the public and some political leaders sometimes seem to ignore.

“For this reason, our desire is to respect that essence, and work to promote the fair as a meeting place by incorporating satellite activities into the program that enrich the experience and bring us more ‘book people.’

In Catalan, there’s a word, lletraferits, which we have translated into Spanish, letraheridos, meaning ‘those happily stricken by literature.’

“We want every letraherido to be at El Retiro, without giving up those who simply aspire to walk among books.” 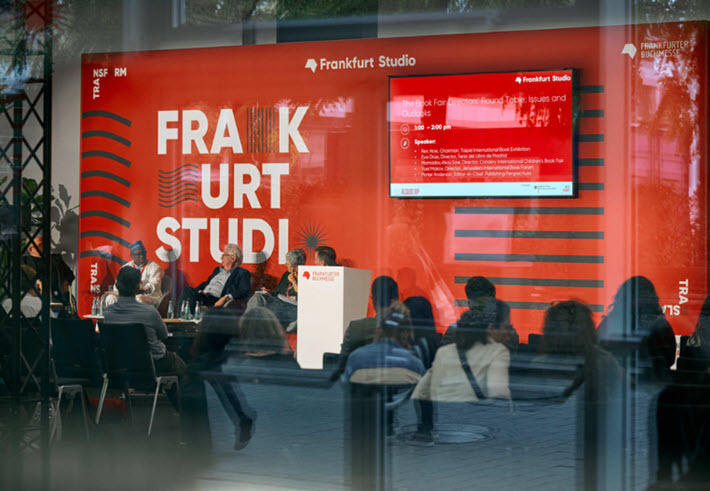 In a shot made from outside Frankfurt Studio in Hall 4 on October 21, book fair directors talking with Publishing Perspectives’ Porter Anderson in a round table made possible by Aldus Up are, from left, Rex How of Taipei International Book Exhjibition (partly obscured in this image); Mamadou Aliou Sow, Conakry International Children’s Book Fair; Yoel Makov, Jerusalem International Book Forum; and Eva Orúe, Madrid Book Fair. Image: FBM, Dominic Driessen

A version of this story ran in our Frankfurter Buchmesse Show Magazine, available to our world readership in a free digital download online. The magazine originally appeared in print on the Messe Frankfurt for trade visitors as Frankfurt Book Fair opened.