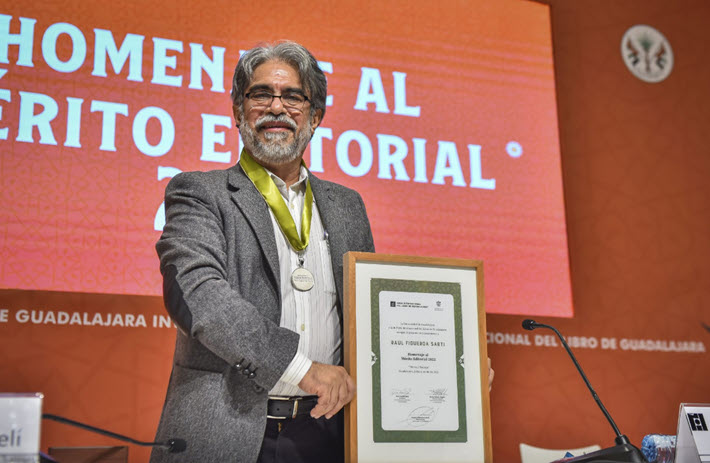 The Guadalajara International Book Fair this year has awarded its prize for Editorial Merit to Raúl Figueroa Sarti, the founder of F&G Editores, which publishes poetry, fiction, and nonfiction. Those works in nonfiction focus on Guatemala’s 36-year civil war and the human-rights abuses perpetrated by the authorities.

Publishing Perspectives readers are familiar with Figueroa Sarti, knowing that for two years, he was shortlisted for the Prix Voltaire from the International Publishers Association (IPA). And last year, he was the recipient of the Association of American Publishers’ International Freedom to Publish Award, also known as the Jeri Laber Award. Today (November 30), Venezuela’s Editorial Dahbar and its founder Sergio Dahbar has become the next winner of the award the AAP honored Sarti with in 2021.

Figueroa Sarti has endured a campaign of political persecution as a result of his publications and writings. In 2009, he was sentenced to a year in prison, accused of copyright infringement—a charge he strenuously denied. His arrest followed years of accusations and harassment, including his phone being tapped. Figueroa, his wife and daughter, moved to the United States for safety.

“Freedom of expression is under attack in Guatemala,” Figueroa Sarti said in his award acceptance speech here in Guadalajara Monday evening (November 28), “and it’s difficult to have a healthy publishing industry” under such conditions.

The recognition of Figueroa Sarti included a speech by bookseller Philippe Hunziker, owner of Guatemala City’s Sophos bookstore. Hunziker referred to Figueroa Sarti as “a publisher who makes people feel uncomfortable” by daring to publish the truth.

Figueroa Sarti used his acceptance speech to highlight the ongoing detainments of two key figures in Guatemala. One is José Rubén Zamora Marroquín, the editor of the newspaper El Periódico. And the second is Virginia Laparra, a senior prosecutor who had been investigating government officials accused of corruption.

Calling himself “a Central American” and F&G Editores as “a Central American publishing house,” Figueroa Sarti was referring to the fact that his catalogue features writers from countries across the isthmus and features Miguel Ángel Asturias, Guatemala’s 1967 Nobel laureate in literature.

“However, this idea remains a utopia,” Figueroa Sarti told his Guadalajara audience. “Because, in addition to the problems of customs and transportation that we publishers suffer in Central America, we must now add the regression taking place in the democracies that sadly are always ‘under construction,’ and for this reason I want to share this award with all my Central American publishing colleagues.”

Receiving the prize,” he said, “strengthens my commitment to being a better publisher, and to fight on a daily basis to defend freedom of expression in Guatemala and Central America. F&G Editores would not be possible without the people who work with me. And I also want to share this prize with the writers who have made F&G Editores what it is, and who are too numerous to name.” 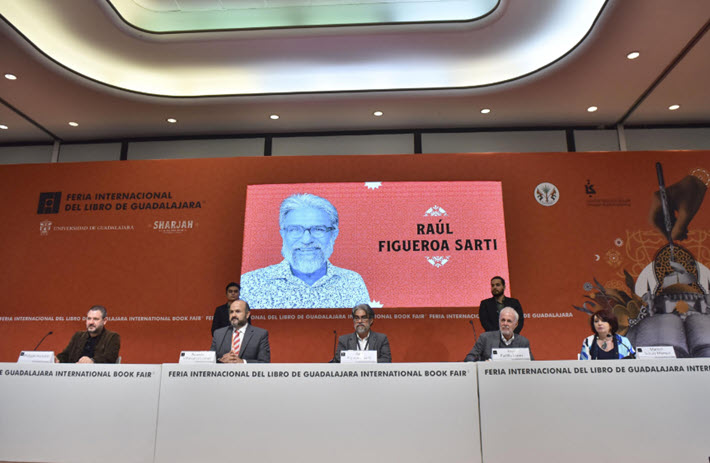 Asked by Publishing Perspectives how the work of an editor and publisher has changed since founding F&G Editores, Figueroa Sarti said, “It’s still difficult to be a publisher in Guatemala, although one thing that’s important is that people now acknowledge the work of a publisher.

“In Guatemala, given the poverty, very few people have access to e-readers, and the digital gap is huge.”Raúl Figueroa Sarti

“Now, there are more people who work as editors, who publish books; there are more publishing houses. And in that sense I think we’ve made a lot of progress. More books are published, and there are also more readers now, even though we continue to moan.”

He also spoke of the importance of the Guatemala International Book Fair, which was founded in 2003 and takes place this week in Guatemala City—but which is also under threat from “mean-spirited interests,” he said, that want to close down the event.

“Now, we have a relatively large book fair that takes place every year, for which readers wait with excitement and which receives a lot of visitors. The fair has played a very important role in increasing the number of readers in the country. So, we’re in a better place than before, and that makes our work easier as editors and publishers.”

But while Figueroa Sarti acknowledges the advances made, he’s also quick to highlight the ongoing challenges, including censorship and political persecution. He talks also of the high levels of poverty in Guatemala that make buying books difficult for many people.

“We’ve been trying to produce books differently,” Raúl Figueroa Sarti said, “but unfortunately, with the war, the tradition of typography in Guatemala has been lost. We continue to have difficulties.

“The government has tried to criminalize me and imprison me, but we continue to work. The problem is still there.”

This is Publishing Perspectives’ 203rd awards-related report in the 215 publication days since our 2022 operations began on January 3.