The 36th edition of Mexico’s Guadalajara International Book Fair has opened with Sharjah as its guest of honor and a prize for Romanian writer Mircea Cărtărescu. 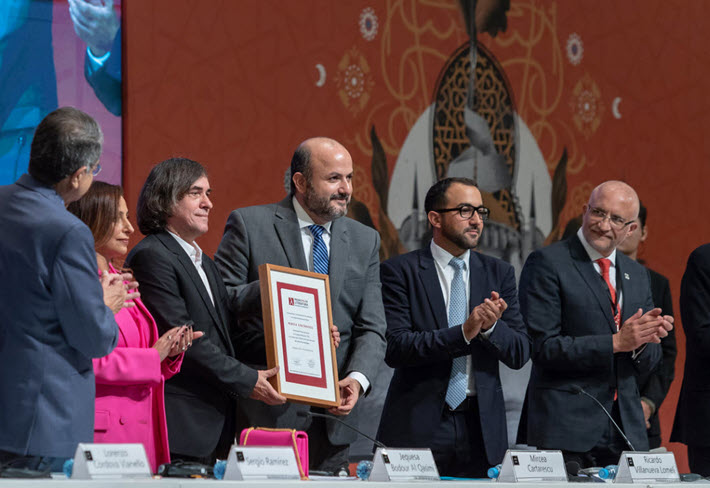 As Publishing Perspectives readers will remember, the 2022 Guadalajara International Book Fair‘s recipient of the US$150,000 FIL Prize for Literature in Romance Languages this year isRomanian poet, essayist, and journalist Mircea Cărtărescu.

And the centerpiece of today’s (November 26) opening events at the show–locally known as the FIL for Feria Internacional del Libro–was the 11 a.m. formal presentation of that award in Expo Guadalajara’s Juan Rulfo Auditorium.

The “laudation,” or honorary speech about the winner, was given by the iconic Nicaraguan author Sergio Ramírez. (Our interview with Ramirez at the 2021 Guadalajara is here.)

Ramírez told the audience, “Mircea breathes the harsh perfume of fiction, … his body a pen, his blood as ink, his mind as a notebook.” After hearing such praise, Cărtărescu said Ramírez’ words had left him speechless and humbled, honored to have been spoken about in such terms by a writer he greatly admires.

In his own comments, Cărtărescu spoke of the freedom of expression that poetry and writing represent, and the influence that poetry has had on humanity since the times of Plato. He recalled that in The Republic, Plato wrote that poetry is capable of generating fear in the powerful by offering a glimpse of freedom.

“Mircea breathes the harsh perfume of fiction, … his body a pen, his blood as ink, his mind as a notebook.”Sergio Ramírez on Mircea Cărtărescu

“In the Platonic city-state,” Cărtărescu said, “the only poets admitted are the official ones, the laureates, who sing hymns and odes to the greatness of the city. Their score is strictly regulated, their aesthetic discourse is one and invariable. The free poet, however, with a plural discourse—that which imitates all the voices of the city—finds no place in the pre-established order. A poet is called before the rulers, who bow before him and recognize his genius, but beg him to leave the city, because he’s not ‘useful’ to it.”

Stressing that poetry is a courageous literature, Cărtărescu said, “Poetry is the dead cat of the consumerist, hedonistic, and mediatic world in which we live. One cannot imagine a more absent presence, a humbler grandeur, or a sweeter terror. No one seems to put a price on it, and yet there’s nothing more valuable,” he said, than poetry.

Speaking for the jury was Tulane University associate professor in French and Italian literature, Oana Sabo. She was joined on the jury panel by Lorena Amaro Castro from Chile; Marco Belpoliti from Italy; Javier Guerrero from Venezuela; Maria Eunice Moreira from Brazil; Antonio Sáez Delgado from Spain; and Laura Scarabelli from Italy.

We have more coverage planned ahead with Cărtărescu at Guadalajara.

This year, the program this year reports that as many as 800,000 attendees are expected, and opening day on Saturday also included the show’s traditional ribbon-cutting, with international dignitaries joining those of the fair itself and the leadership of the University of Guadalajara, which produces the FIL. 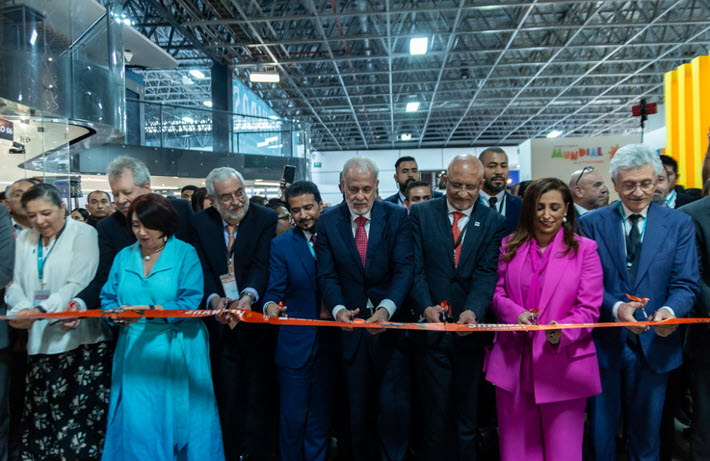 Following the ribbon-cutting, Ahmed Al Ameri‘s Sharjah Book Authority hosted a VIP tour of the Sharjah pavilion, said by its designer, Weam Ibrahim, to be the largest in a series of major international fairs’ guest-of-honor appearances by the United Arab Emirates’ third state.

The stand—and we have more coverage coming this week—holds 21 panel discussions and is scheduled to produce 26 workshops during the show, which runs to December 4. Sharjah has arrived with a delegation said to comprise 150 writers and other creative workers, as well as officials. 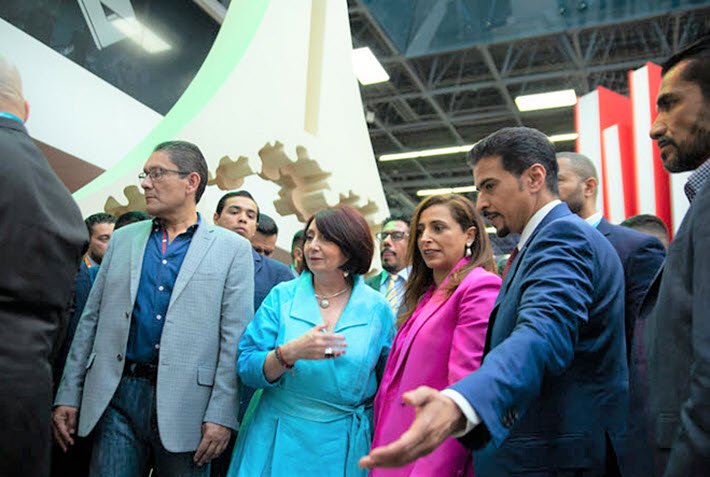 In the course of the programming, it’s expected that dialogues and debates will be included with at least 30 Arab and Mexican authors and artists, whose focus will be key elements that connect the Arab culture with that of Mexico. Al Ameri says that these sessions are designed “to illuminate the history of relations between the Arab region and Mexico.”

In addition to events at the pavilion, FIL Forum events in the evenings are to include Arab performing artists including Emel Mathlouthi, a night of opera with Fatima Al Hashmi, Lorena Flores, the Higinio Ruvalcaba Orchestra, and guest musicians; Arqam Al Oubri, accompanied by the Escarabajo Blues Band; and the Heritage Institute Traditional Band of Sharjah.”

A film, Khorfakkan, written by author-emir Sheikh Sultan Bin Mohammed Al Qasimi, is also being given a screening at the FICG Cinema Library and the UDG Cinema Forum.

Later in the day today, the programming calls for the Sharjah pavilion to host a conversation titled “The Arabic Lexicon and Its Impact on the Spanish Language,” Jorge Alberto Perez speaking with Al Ameemi and Moisés Garduño García. And Muhammad Safi and Al Mosteghanemi are speaking in a session called “An Historical Dictionary of the Arabic Language.” 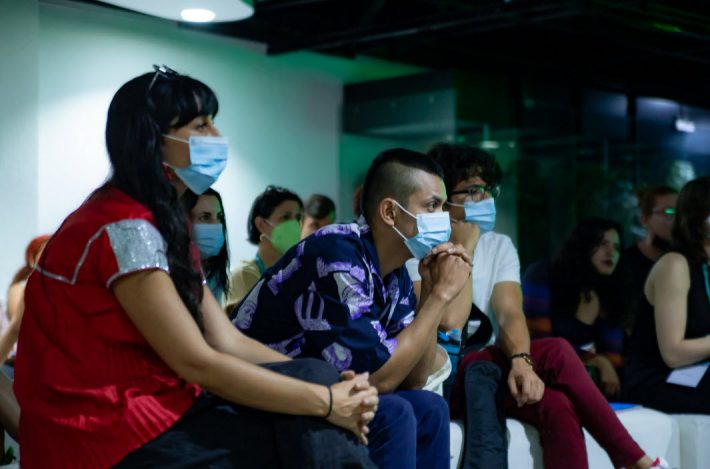 This is Publishing Perspectives’ 199th awards-related report in the 212 publication days since our 2022 operations began on January 3.