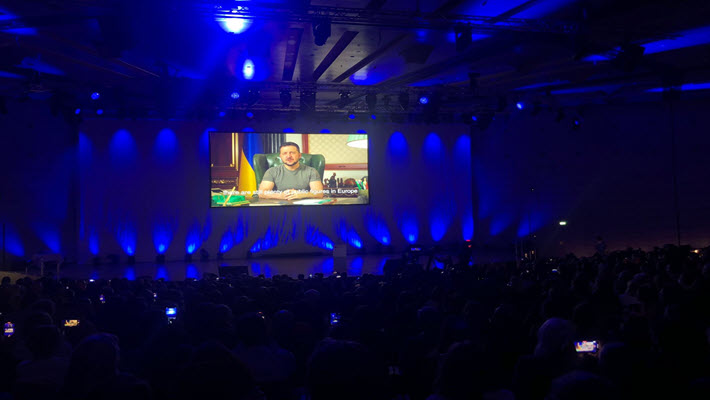 The Ukrainian president made the case in his Frankfurter Buchmesse address that culture, like life, is under fire under the Russian assault.

A view of the recorded message from Volodymyr Zelensky to Frankfurter Buchmesse, as seen in the Congress Center’s Harmonie Hall. Image: FBM, Ines Bachor

Zelensky: ‘Not Only Culture, But Also Life’

Russia and Iran were sharply criticized by the Ukrainian president, Volodymyr Zelensky, in his video address to Frankfurter Buchmesse, comments recorded on Tuesday and delivered today (October 20).

Zelensky’s remarks, viewed by an audience in the enormous Harmonie Hall at Messe Frankfurt’s Congress Center, drew a standing ovation and served as the emotional centerpiece for an event hosted by Juergen Boos, Frankfurt’s president and CEO. and Peter Kraus vom Cleff, president of the Federation of European Publishers and managing director of the Börsenverein des Deutschen Buchhandels.

In the audience, International Publishers Association‘s (IPA) vice-president-elect Gvantsa Jobava carried a banner saying that her native Republic of Georgia stands with the people of Ukraine. Georgia was invaded by Russia in August 2008 and remains partially occupied by Putin’s forces. 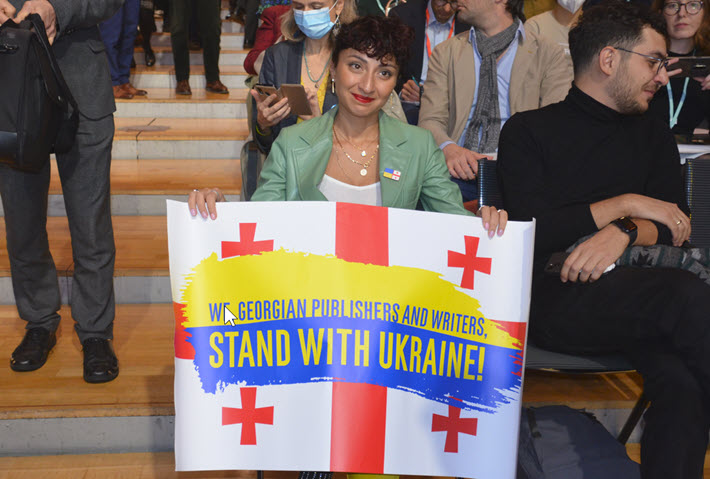 Gvantsa Jobava, vice-president-elect of the International Publishers Association, shows the Republic of Georgia’s support for the people of Ukraine during the Zelensky Frankfurt address. Image: Publishing Perspectives, Roger Tagholm

Zelensky: ‘The Lack of Knowledge’

Zelensky pointed out that Russia’s and Iran’s state exhibition stands are absent at this year’s Frankfurter Buchmesse. Companies aligned with those regimes are barred from participation.

“They become less present in the field of culture,” he said, “and at the same time more present where everything gets destroyed—not only culture, but also life.

“I keep receiving reports about the targets hit by Iranian attack drones that Russia is buying.

His explanation for the situation, he said, has to do with widespread unawareness. “The lack of knowledge the majority of the citizens have,” he said.

Books, Zelensky said, have an important role to play. He said that words are weapons to dispel this ignorance.

“When people lack knowledge,” he said, “they’re more easily manipulated by politics. … So please, keep writing about [the war]. Keep reading about it. Do everything possible for Europeans to know how many people lost their lives struggling for rights and basic respect that each of you has been granted since your birth.” 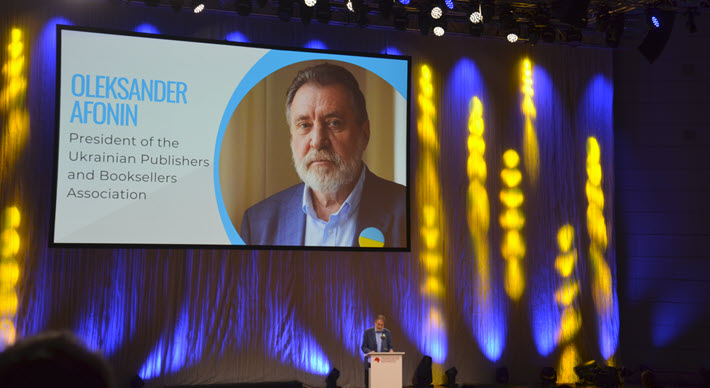 “Missile strikes are destroying residential areas and essential infrastructure as well as libraries, bookstores, publishers’ offices, and printing houses. Ukrainian books were massively destroyed from the libraries, schools, and universities in the occupied territories.”

And yet, “Despite the aggressor’s madness,” he said, “the publishing industry in Ukraine keeps going. We keep working under the circumstances of massive human, material, economic, and financial losses. We keep creating Ukrainian books and despite all the obstacles are doing our best to deliver them to readers both in Ukraine and abroad, since many Ukrainians have been forced to temporarily leave their homes.

“The ministry of culture and information policy of Ukraine, together with the Ukrainian Federation of Publishers and Booksellers and the Ukrainian Book Institute, have developed a plan for the recovery of the Ukrainian publishing industry.”

Afonin was highly critical of Russian publishers, noting that in “working under Putin’s dictatorship” they’ve been turned into what he called “tools of propaganda.”

Since the beginning of the Russian military aggression against Ukraine, he said, not a single Russian publishing house has condemned the war or declared support for Ukraine. We see such a position as a cynical defiance of not only the world publishers’ community but also of the world readership.“

Afonin said he hopes the international publishing community “already understand[s] what kind of role the Russian publishers played for years and years, feeding anti-Ukrainian propaganda both before and during the Russian aggression against Ukraine.

“This role makes cooperation with them unacceptable under the current circumstances.”

Finally, Afonin appealed to the leadership of the European Union’s member states: “We are addressing you, dear colleagues, with a request to create a special fund to support the Ukrainian publishing industry.”

He proposed that such a fund could be founded by the Federation of European Publishers or the Börsenverein,  both already having experience of fund-raising for Ukrainian book publishing.

Here’s the Zelensky video address from the Ukrainian president in full, at just over six minutes. Zelensky’s comments are subtitled in English.

On Saturday, Olena Zelenska, the Ukrainian first lady, personally will visit Frankfurter Buchmesse for her program in the Brigitte Live “Exciting Conversations” series.

More on Frankfurter Buchmesse is here, more on this year’s Guest of Honor Spain is here, more on guest of honor programs and markets is here, and more on international book fairs is here. More on the Volodymyr Zelensky speech during Frankfurt, with information on more Ukraine-related events at the fair, is here.