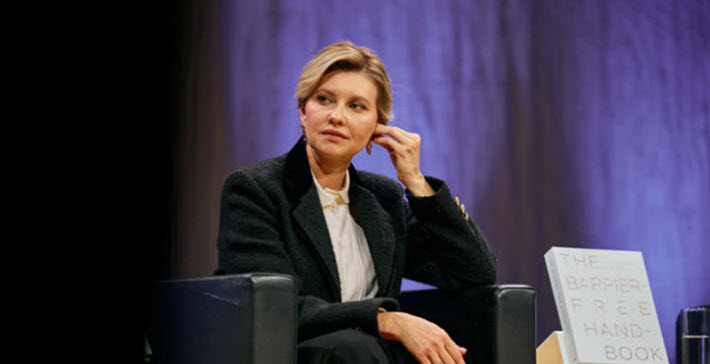 In an hourlong onstage interview at Frankfurt Book Fair, Olena Zelenska spoke of ‘the truth of what we’re witnessing every day.’ 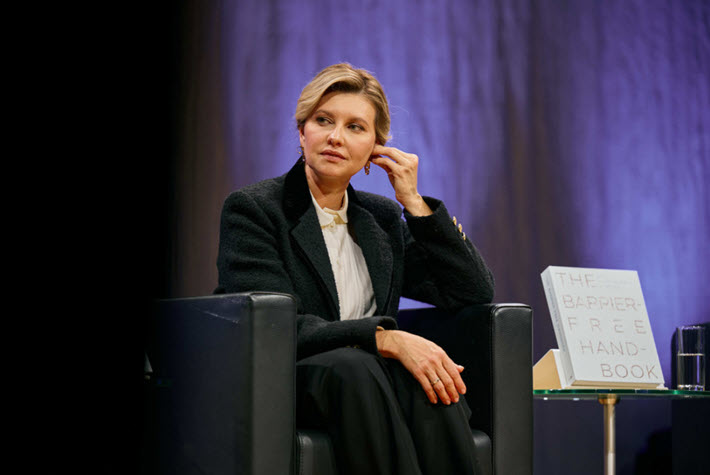 The Ukrainian first lady, Olena Zelenska, speaks during Frankfurter Buchmesse 2022 at Messe Frankfurt’s Harmonie Hall. Beside her is a copy of ‘The Barrier-Free Handbook,’ which she presented at Frankfurt. Image: FBM, Dominic Driessen

‘Right Now, We Have To Struggle’

Following the recorded address to Frankfurter Buchmesse by Volodymyr Zelensky, Saturday’s appearance by the Ukrainian first lady at the Messe Frankfurt’s Concert Center had been announced as a digital conversation, not unlike the one she made earlier this year at a British Library event.

As it turned out, Olena Zelenska would appear in-person in Frankfurt on Saturday evening (October 22) in what is traditionally Frankfurt’s biggest showcase event, in recent years featuring Dan Brown, Margaret Atwood, and others.

Earlier in the day, she took part in an event in Frankfurt Studio with Elke Büdenbender, wife of Germany’s federal president. The two first ladies’ focus then was a fundraising campaign for refugee children, Better Time Stories. That program is backed not only by Zelenska and Büdenbender but also by Doris Schmidauer, first lady of Austria, and by Princess Laurentien van Oranje of the Netherlands.

Initiated by Andriy Shmyhelskyy, the highlight of Better Time Stories is its facility for parents, grandparents, and other loved ones to record their readings of children’s books so that those kids who have been displaced by Vladimir Putin’s savage war on Ukraine can hear the voices of their families reading stories to them.

In her evening appearance in Frankfurt on Saturday, Zelenska was a guest onstage in the Brigitte Live “Exciting Conversations” series, speaking with Brigitte Huber, the show’s editor-in-chief, and with Meike Dinklage, the show’s chief reporter. With her were copies of The Barrier-Free Handbook, a project she had worked on as first lady before the Russian invasion. It was to have been released during the 2022 Book Arsenal Festival in Kyiv, a plan derailed, of course, by the Kremlin’s assaults.

Both Saturday appearances by the Ukrainian first lady seemed remarkable in themselves for the security factor, of course.

Falling on the Saturday of Buchmesse’s public-entry weekend, they occurred when the fairgrounds were teeming with citizens. Visible security measures were managed with low-key skill. In the evening, a robust layer of guard capacity had been added to Harmonie Hall’s array, but the operation was deftly understated, deployed in plain clothes.

‘I Was in a State of Shock’ 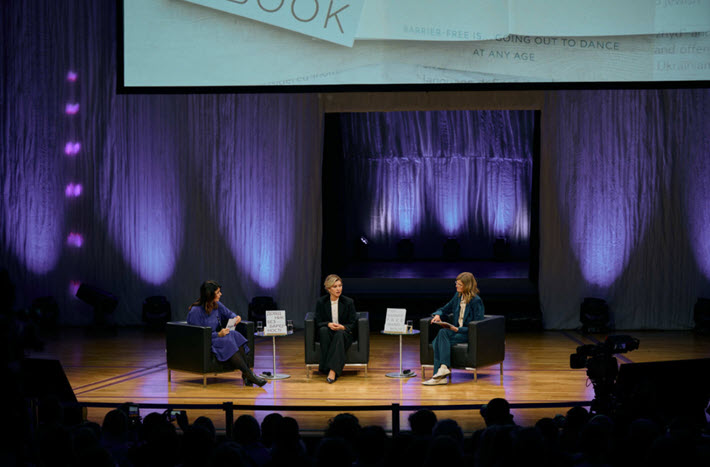 Zelenska’s conversation with Huber and Dinklage may have been welcomed by the first lady for a chance to focus on some of the more “adult” elements of her country’s and people’s struggle.

The many fine programs of support producing books for refugee children have been gratifying to see, of course, and they reflect a profound generosity and concern on the part of so many in the world book business. At times, however, the emphasis on children and the impact of Putin’s aggression may mask for some the suffering of adults, the mature protectors of the more-than 2 million Ukrainian children estimated to have been displaced in the nightmare. Those adults have been traumatized, too, of course, while trying to keep their children as happy and healthy as possible, often under impossible circumstances.

Zelenska said at one point, “Our experts now say that most Ukrainians will have post-traumatic stress disorder. I assume that maybe we can relax later, and then we’ll all feel this PTSD in full force, but right now, we can’t do this. We have to struggle.” It’s that sense of the relentless weight of what’s going on that’s impressive in Zelenska’s bearing and commentary.

She’s a composed and unassuming figure onstage, gracious and giving, and yet she’s obviously and understandably impatient, concerned, coping with enormous levels of stress and demand. She flashes a bright, warming smile when she can, laughs easily when appropriate, but shoulders a weight that few of us will ever have to experience, and she speaks openly about her mission, an effort to ease the pain and daily strain for so many, to be the advocate of her people and their needs.

Initially, she said through interpreters working in Ukrainian, German, and English, “I was in a state of shock. I don’t think I was afraid. It was anger. Rage. How can this happen? How can you do such a thing in the 21st century? There was no despair. There were terrible minutes. We saw new, tragic sides of this war. We saw the first victims when we saw Bucha. When you hear those personal stories of people who are now dead, the most unpleasant aspect is that on the one hand, you already have so much information, and yet on the other hand, every time” there’s fresh violence, “it hurts as if it was for the first time. You feel fear, as for the first time.”

Describing the anxiety she and her compatriots feel mounting, Zelenska said, “Things are getting closer and there are ever more people you know who are affected, or acquaintances who have fallen in action and you don’t know where they are.”

A ‘Battlefield of Information’

Zelenska and her husband met at university and married in 2003, the same year she became a script writer at the television production company Kvartal 95 Studio. There, she was on a team that wrote comedic sketches in which Volodymyr Zelensky performed. Like her mother, the first lady has a background in engineering. 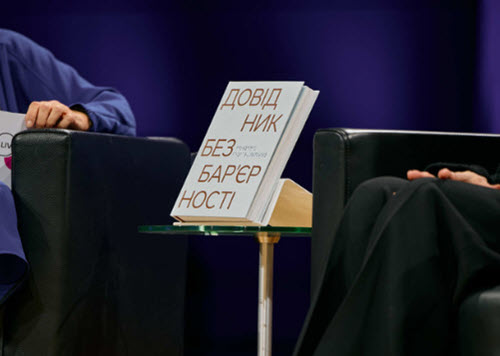 When asked questions about her marriage and family life, she gamely answered–going so far as to say that she had learned from news reports that her husband had decided to run for office. She conceded that their children have seen little of their children since the February 24 onslaught of Putin’s attacks. If anything, requests for such personal information seemed somewhat intrusive, and Zelenska appeared to want to oblige her interviewers but without much pleasure.

Instead, she seemed most comfortable speaking about the facts of this crisis of politics and invasion, despite the fact that her career and temperament hadn’t prepared for this role.

If anything, it was possible to see how closely she’s aligned with the highly sophisticated public-information campaign that Ukraine-under-attack has waged, mobilizing many parts of the populace to use social media and other means to communicate the crisis and make clear the gravity of the emergency. Admirably forthright, Zelenska left no doubt about the travesty gripping her country.

“I’m not a politician,” Zelenska said, “but I’m perceived as representative of the state. You have to tell the true stories, the truth of what we’re witnessing every day. You have to tell the world that everybody’s on the same side. There’s white and there’s black. It’s easy to understand. It’s quite simple. There are no shades of gray.

“And if someone says that things aren’t that clear, no everything is quite clear: We are the victim of a campaign offensive and we’re fighting for our lives. And every platform that we have is being used. This is our kind of battlefield of information.”

Thanking Germany for its extensive support of refugees and, especially, what she described as the efficiency of the country’s response to the crisis, she made sure to convey to her largely German audience that Ukrainians, too, are unflagging in doing their part to resist.

“We know that nobody must stop. Everybody does something that’s important. The teachers are teaching, the doctors are treating people, the military is fighting, children go to school, they’re studying … Everybody assumes their responsibility. And when I see that I can be useful, I make use of [any] opportunity.”

Drawing theater-wide rounds of applause for Ukrainians’ resolve, Zelenska demonstrated an eloquent grasp of her role.

“There are different political and social aspects. I know there are many challenges. But we’re talking about human lives. And the aggressor will not stop, we have to stop the aggressive party.”Olena Zelenska, Ukrainian first lady

“I am the wife of the Ukrainian president,” she said. “I’m also a daughter of my parents. I’m constantly worried about my parents. My parents are worrying about me. I’m also a mother. I always worry about my children.”

And yet, Zelenska knew her opportunity, and as she said, it’s her responsibility to take it: “I understand that this is against the protocol of diplomacy-first. It’s ‘Don’t talk about weapons’ as a general rule. But we don’t have to adhere to those rules, as the situation is quite special.

“I’m talking about anti-missile systems. I don’t want the children to be sacrificed. Germany already was active and now we can feel that Germany has become more active. Thanks to the system that you supplied recently, we were able to defend ourselves against missiles, and we know if the missiles would have reached their targets, there would have been many victims.

“So Germany can take pride in this, that you supplied us with those weapons. You saved those lives. Many Ukrainians lives.

“There are different political and social aspects. I know there are many challenges. But we’re talking about human lives. The faster we get this help, the faster the war will end. And the aggressor will not stop. We have to stop the aggressive party.

Olena Zelenska hadn’t finished what she was saying, but a huge wave of applause already was welling up in the audience.

“Yes, whenever I have a meeting,” she said proudly, “I ask for more weapons.” 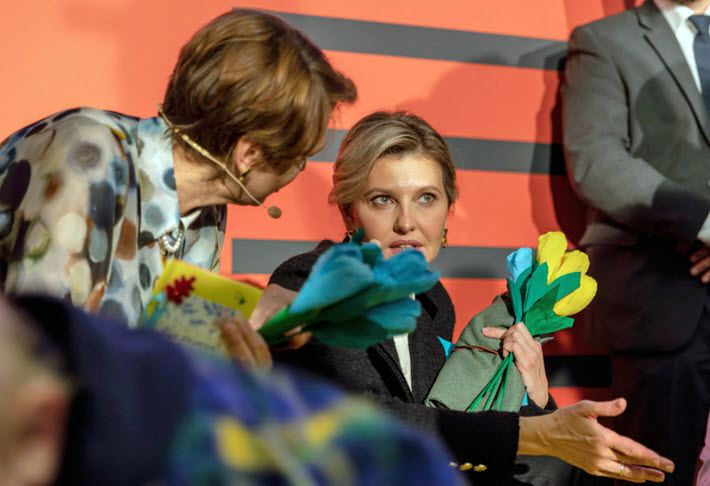 More on the Volodymyr Zelensky speech during Frankfurt, with information on more Ukraine-related events at the fair, is here.