The 2022 Frankfurter Buchmesse is opened with heartfelt pleasure in a return to Frankfurt—and candid alarm about coming challenges. 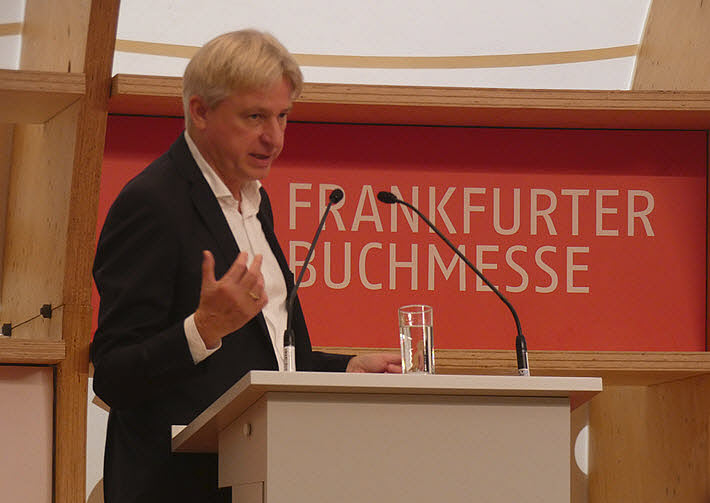 In Frankfurter Buchmesse‘s opening press conference today (October 18), there were clear expressions of solid relief onstage as a strong, engaged cohort of the international book publishing world gathers on the eve of what one speaker called the world’s largest marketplace of books and stories.

Having created a digital edition of itself in 2020, then a hybrid evocation in 2021, the trade fair this year, president and CEO Juergen Boos told the news media, could well approach 2019 attendance figures inclusive of public fair-goers’ presence on the weekend, with 94 countries now represented among the more-than 4,000 professional publishing exhibitors who are in place on Messe Frankfurt’s show floors.

Boos is also fond of wisely pointing out that “welcome back” is hardly the only important understanding of the moment. Planes are landing, hotels are filling, there’s busy footfall on the stones of the Agora at the fairgrounds’ center, and the rights-trading center’s more-than 600 tables have been sold out for months.

But the Buchmesse must be different each year, Boos says, responsive to the needs and opportunities of an industry sector that helps both define and contour, even a milieu of shuddering political divisiveness and darkening distrust. Boos recommends to colleagues evoking less a sentiment of “welcome back” and more something tougher, more sharply directed at making it clear to a shaken world that literature’s unique capacities to help are threatened in many ways.

As evidence of that, Boos answered an interesting question from a journalist by talking about some of the topics that might be chosen as focal points for many publishers at the book fair—from cookery to science, as he said.

“But in this pavilion,” the white Frankfurt Pavilion not seen in the Agora since 2019, the focus is on “social topics that are close to our hearts,” Boos said.

This will include, for example, a succession of special Saturday afternoon sessions featuring the Ukraine crisis perpetrated by Vladimir Putin, a chance to see a strong contingent of Ukrainian influencers onstage.

“These are international topics,” Boos said, “big topics, relevant topics to discuss in the world.” Indeed, he spoke of author Mohsin Hamid’s latest release, The Last White Man, as “creating a scenario in which the prejudice becomes visible?”—as apt a line for the book’s dynamic as any critic has yet articulated, making prejudice “become visible.”

Essentially, the argument of today’s news conference was that if the policy needs of the publishing marketplace are neglected—if economic and production challenges deplete the book world’s ability to provide society with the sustenance it needs—then the intellectual ecosystem won’t be able to nourish a foundering social construct.

And we can step you through this critical examination of the industry and what it needs, by quickly looking at the comments brought to journalists today by Boos, by the Börsenverein‘s Karin Schmidt-Friderichs, and by the Pakistani-British author Mohsin Hamid.

Frankfurt’s presser today clearly was an attempt at outreach on behalf of the industry and its foremost show, with Boos, Schmidt-Friderichs, and Hamid energetically engaged in that effort.

“Personal encounters,” Juergen Boos told the press, “are more important than ever, since interacting in person helps reduce polarization.

“People speak differently with each other when they are face-to-face. In the coming days, topical, controversial, and passionate  discussions will take place in Frankfurt. And they won’t go unheard.

“After all,” he said, “in keeping with this year’s motto Translate. Transfer. Transform, we firmly believe that the book industry can provide the necessary understanding—whether by translating literature from one language to another, by demonstrating global solidarity with book industry professionals in exile, or by  facilitating the international networking that takes place here.” 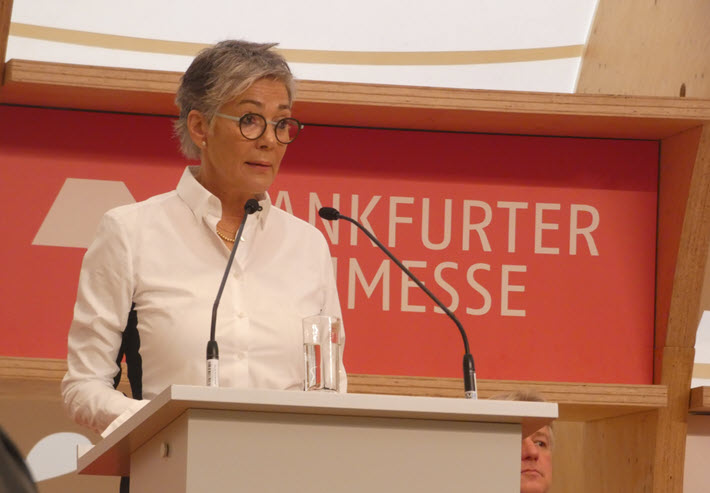 Schmidt-Friderich’s message was to the various media at the news conference was stark and concerned While “publishing houses and bookstores are keen to ensure a comprehensive supply of literature, nonfiction and scientific literature, especially during these uncertain times” of political turmoil, violence, unease, and faltering prosperity, “Only if the sector is economically stable,” she said, “can it continue to contribute to the internal stability of society”.

In the Buchmesse’s home market, Germany, she said, “Bookstores are expecting energy costs to rise by up to 300 percent. Publishers who have already had to pay about 50-percent more for printing and producing their books this year, are expecting further increases of 20 to 30 percent in the coming year.”

She cited less footfall in the city centers and poor consumer sentiment.

September, Schmidt-Friderichs said, was the fifth month in a row with declining turnover for the book market. After nine months of the year, results in central trade channels are 2-percent below a pre-pandemic norm.

And she called for action on four policy fronts, action needed to ensure that the sector can fulfill its societal mission:

Hamid: ‘A Hopeful Act of Cooperation’ 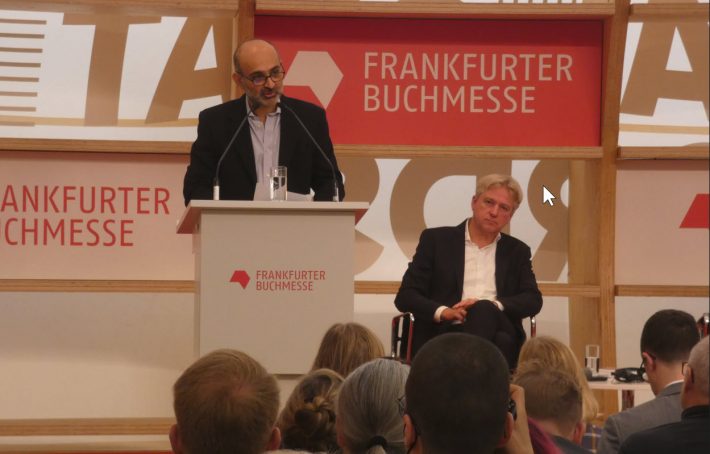 M0hsin Hamid, the twice-Booker-shortlisted author of the recently released The Last White Man, detailed in his keynote address the fact that he had at one time lost faith, in essence, in the notion that the world is improving. 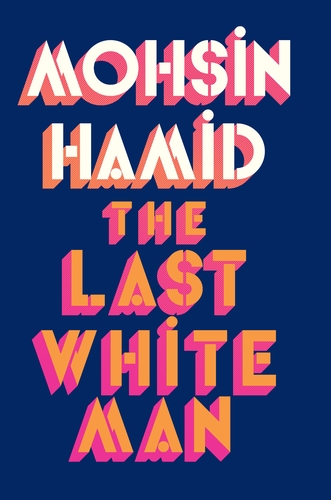 “I had been able to believe in an improvement all these years, because I thought there was a very clear formula for progress, namely the formula for democracy plus science plus economics.

“But even while I was still saying this,” in public addresses and educational settings, “I realized that the foundation of my conviction was both simpler and more profound.

“I had believed that the world would be a better place better because I trusted in the irresistibility of cooperation. But lately, cooperation has been going steadily backwards.”

In a new understanding of the place of books and literature, Hamid said that he’d come to see that “Readers of books are not spectators.”

“They are creators,” he said, “inspired by the source code of the text they hold in their hands. Writers do not write novels. They write half-novels. It is the readers who turn these half-novels into what they experience as novels. …

“To read a book is to participate in a radical act of co-creation. And writing a book is to invite another person to role-play in a space where there are only the two of them. It’s basically like the role-playing games that we used to play as kids.” 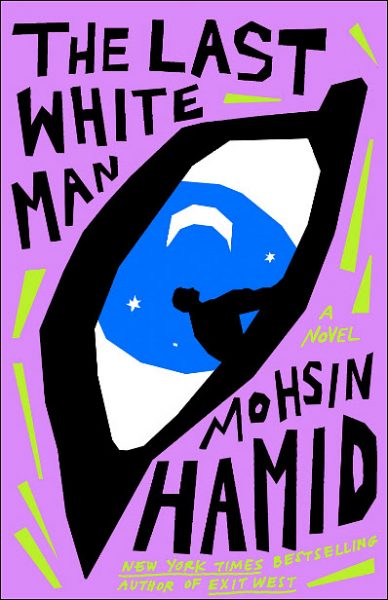 And those games, of course, were and are … cooperative.

“As our world turns away from cooperation,” Hamid said, “novels become all the more important. In a world that seems to be about to enter a phase of darkness, novels are a pile of embers that we hold in our hands, the embers of possibility.

Building on this personal evocation of alarm for today’s tensions and for a search to ease them, Hamid would later expand on this concept of cooperation in literature in the context of a question from a journalist about technology.

“What needs to happen,” he said, “is a shift away from that tool being used on us” and instead a move “toward the development of tools that we as individuals, human beings, use in the way we wish to use them. I’d like to see technology that allows leaders to read better, to be more focused, instead of replicating a world of continuous distraction.”

Overall, far from an hour of sugary platitudes and cheers, Boos and his associates had indeed moved the moment forward, moved this 2022 Frankfurt Book Fair beyond just the “we’re back” sentimental outlook and forcefully into a position of honest concern and demands for the industry, its consumers, and policy-makers, demanding that all parties step forward and take hold of the issues believed to be ahead in an increasingly difficult winter.

Join us for ‘A radical, politically engaged fiction’: Mohsin Hamid in conversation with Porter Anderson, a Publishing Perspectives presentation. 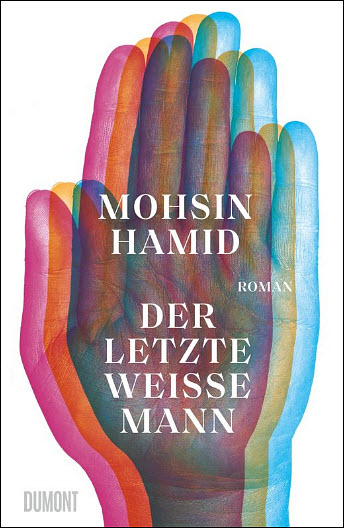 5.30 p.m. Wednesday, October 19, Frankfurt Pavilion, Agora
Following his keynote address at the 74th Frankfurter Buchmesse Opening Press Conference, author and essayist Mohsin Hamid sits down with Publishing Perspectives Editor-in-Chief Porter Anderson for a discussion of what Hamid has described as fiction’s “strange power to destabilize the collective imaginings we inherit and reproduce.”

This examination of that potential for a muscular, disruptive literature will explore how Hamid, twice shortlisted for the Booker Prize, has called for “a radical, politically engaged fiction” – and how he handles the art and business of creating fantastic, timely alternatives that sting us with the hard truths of our world’s immediate turmoil.