The Icelandic Vigdís Prize 2022 goes to Juergen Boos in recognition of his ‘tireless support of languages and cultures’ at Frankfurt’s helm. 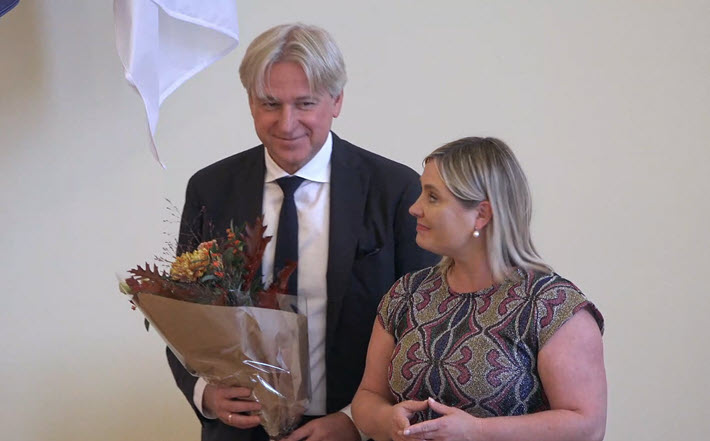 The president and CEO of Frankfurter Buchmesse, Juergen Boos, has been named the 2022 winner of Iceland’s Vigdís Prize, an honor conferred for outstanding contributions to world languages and cultures.

The Vigdís Prize, awarded to Boos on Wednesday in Reykjavik on Wednesday (October 5), is given by the Icelandic government, the University of Iceland, and the Vigdís International Centre for Multilingualism and Intercultural Understanding. The program is named for Vigdís Finnbogadóttir, who was Iceland’s president from 1980 to 1996–the world’s first woman to be democratically elected a head of state. Finnbogadóttir was present Wednesday to hear Boos’ acceptance speech.

In a fortuitous bit of timing, the 74th edition of Frankfurter Buchmesse (October 19 to 23) is themed on an appreciation of translation, which of course lies at the heart of the international book publishing industry’s robust translation and publication rights-trading business, most especially at Frankfurt, the world’s largest international book publishing industry trade show. The promotion of translation is one of the factors reflected in Boos’ selection for the award, and this year’s Literary Agents & Scouts Center at Frankfurt has sold out its entire cohort of more than 650 tables.

Boos’ citation as the 2022 laureate is for his “tireless support of languages and cultures” in his role as Buchmesse’s chief.

In his acceptance speech on Wednesday, he referred to Iceland’s turn as guest of honor at Frankfurter Buchmesse in 2011, saying, “For many visitors, Iceland’s appearance at the fair opened up a new perspective on something perhaps previously unknown to them–the same way you can be surprised and moved anew by a book you’ve pulled off the shelf time and again.

“And naturally, I remember very well what Vigdís said in the summer prior to the book fair: ‘Literature is one of the things that means the most to us. For centuries, stories have warmed this cold land.'” And she said, he added, that “When it comes to people’s identity, language is like an anchor.”

His receipt of the award, he said to Vigdís Finnbogadóttir in her seat on the front row, “warms me as the days grow colder,” and he noted that the chill to which he referred is not only seasonal but a feature of the geopolitical forces of this challenging autumn.

In the choice of Boos for the Vigdís Prize, special attention has been given to the trade fair’s guest of honor program, which this year features Spain (in its second turn as the honored market), and in the past has boosted the international market visibility for literature in Flemish and Dutch, Brazilian, Indonesian, Catalan, and Icelandic, among others.

“By introducing diverse literatures to the world’s stage, Mr. Boos has provided invaluable support to authors, translators, book publishers, and their respective language communities,” says a statement from the Vigdís Institute. 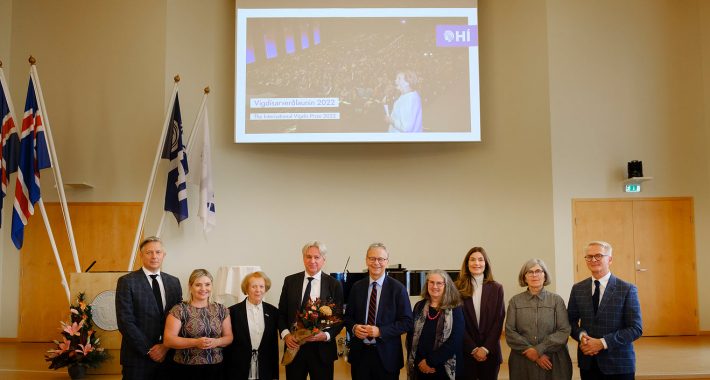 Boos has been president and CEO of Frankfurter Buchmesse since 2005 and is also president of LITPROM (Society for the Promotion of African, Asian and Latin American Literature) and the managing director of LitCam, Frankfurter Buchmesse’s literacy campaign. Boos was awarded the Austrian Cross of Honor for Science and Art in 2013, and in 2017 he received an honorary degree from the Ivane Javakhishvili Tbilisi State University.

“I remember very well what Vigdís said in the summer prior to the book fair: ‘Literature is one of the things that means the most to us. For centuries, stories have warmed this cold land.'”Juergen Boos, Frankfurter Buchmesse

In 2018, he was made a Chevalier des Arts et des Lettres at the French embassy in Berlin. As Publishing Perspectives readers know, he’s also a member of the Scientific Committee of the Sheikh Zayed Book Award and a member of Akademie Deutscher Buchpreis, the academy of the German Book Prize.

The Institute for Foreign Languages is one of the affiliated institutes of the Centre for Research in the Humanities at the University of Iceland and has been operating since the 1970s.

In October 2001, in connection with the 90th anniversary of the founding of the University of Iceland and the European Year of Languages, it was agreed to add the name of Vigdís Finnbogadóttir to the institute, to honor Vigdís, as she’s popularly known, for her contributions to foreign-language learning and appreciation through her work as a teacher, translator, theater director, and president of Iceland.

Vigdís Finnbogadóttir now is a goodwill ambassador for the Paris-based UNESCO in the area of languages. In this most recent role, she as placed special emphasis on the importance and conservation of “small language” communities, linguistic diversity, and multiculturalism.

Here’s an embed of the award program from Wednesday, provided by the Vigdís Prize.

This is Publishing Perspectives’ 177th report on awards-related news published in the 184 days since our 2022 operations began on January 3.

More from Publishing Perspectives on Frankfurter Buchmesse is here, more on the work of Juergen Boos is here, and more on various industry accolades is here.