The annual Books at Berlinale program now is accepting submissions from film-rights holders for novels with high adaptation potential. 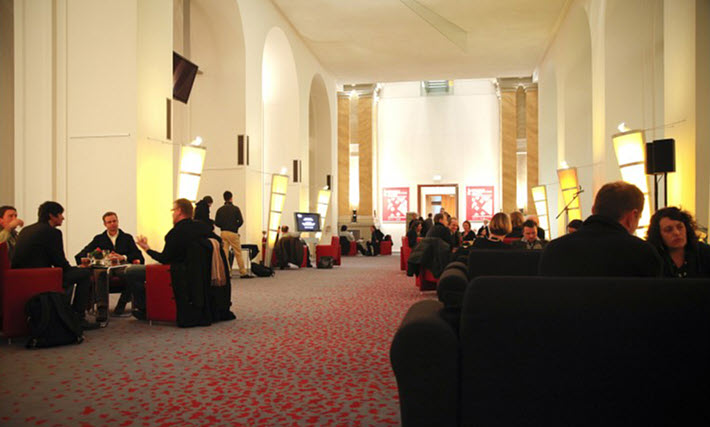 A networking event in the 2012 Berlinale Co-Production Market program, which produces Books at Berlinale in association with Frankfurter Buchmesse. Image: Berlinale

The Books at Berlinale program—long familiar to our Publishing Perspectives international readership—has issued its call for submissions for its 18th edition, scheduled to take place as a part of the Berlinale Co-Production Market, February 18 to 22.

A joint initiative of the Berlin International Film Festival and Frankfurter Buchmesse.

As usual, the 18th edition of “Books at Berlinale” will take place during the Berlinale as part of the of the Berlinale Co-Production Market (Feb 18-22, 2023).

As you know, the program selects 12 or so books to pitch to an audience of some 150 internationally established producers during the film festival.

The live presentations of the books are followed by a networking get-together during which contacts with interested producers can be established. Each publisher/agent has her or his own standing table and can be approached directly by the producers.

Frankfurt’s 2023 Guest of Honor Slovenia us expected to present this year during the program’s networking stage.

Books at Berlinale is set for February 20 as an in-person event.

In order to propose a book for presentation in the show, you have to be the holder of the film rights for the novel in question. Your proposal must be for a book that’s either bestselling or especially awarded, new or yet to be published, and with “great potential for screen adaptation.”

A longer synopsis, and a sample translation of the novel should exist–not only for selection purposes, but particularly to be given to interested producers upon request.

For submission and our selection, a more detailed synopsis is mandatory, the sample great, but not an absolute requirement.

Industry professionals who have a novel they’d like to see considered, should see the information on the Co-Production Market (PDF) and use the form for Books at Berlinale submission.

The deadline for submissions is November 29. You can contact the program via coproductionmarket@berlinale.de .

In addition to the pitch and networking event on February 20, there’s will also be an additional Matchmaking Session in which publishers and agencies—including those selected for Books at Berlinale—can meet producers in one-on-one meetings. We’re very happy to cooperate once more with the Netherlands Film Fund for this exclusive matchmaking.

If you’re not sure which book to submit, contact the program to discuss your suggestions. Of course, this also applies to all questions concerning submission, and so on. Use either adam.ext@berlinale.de or books@berlinale.de

The actual selection for “Books at Berlinale” will be made just before Christmas, the program tells us.

If your book is selected, you can participate in the entire Berlinale Co-Production Market program if  panel discussions, networking receptions, and more.

The Berlinale Co-Production Market runs five days as part of the Berlinale. It’s for producers, film financiers, broadcasters, distributors, and sales agents who work in the field of international co-productions. Film producers are given a platform to find co-production partners and financiers for their selected film projects.

In 2020, around 600 industry professionals from around the world attended the Berlinale Co-Production Market of which Books at Berlinale is a part.