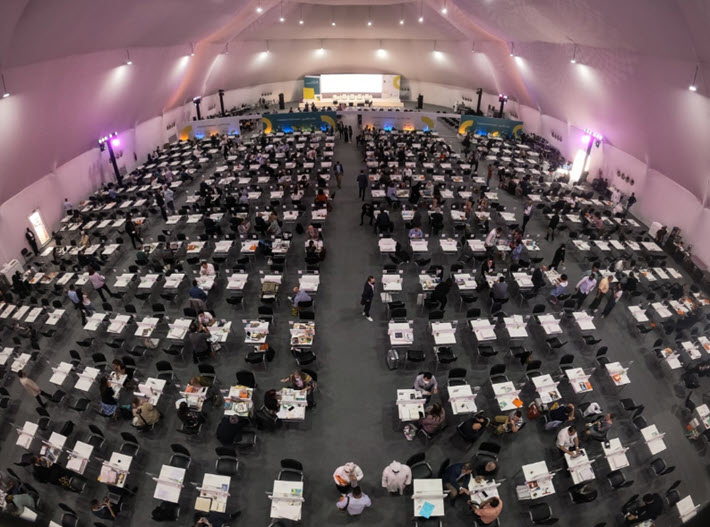 The cavernous interior of the Sharjah Publishers Conference tent in 2021, its rights-trading tables and performance theater drawing a reported 548 industry professionals to the United Arab Emirates. Image: Sharjah Book Authority

Even as many in world book publishing are focused on Frankfurter Buchmesse (October 19 to 23), preparations are also underway for the Sharjah International Book Fair‘s 12th annual Sharjah Publishers Conference, set for October 30 to November 1, with the fair itself then running November 2 to 13.

This year’s program for the annual Publishers Conference will include an onstage conversation between Penguin Random House worldwide CEO Markus Dohle and Bodour Al Qasimi, the outgoing president of the International Publishers Association (IPA) and founding publisher and CEO of the United Arab Emirates’ Kalimat Group.

Those who were at Frankfurt Book Fair in 2021 might remember the fair-opening conversation that Dohle joined Publishing Perspectives for in Frankfurt Studio as a model for how effective these executive talks can be. In this case, two of the international industry’s highest-visibility figures are expected to touch on issues including digital transformation in publishing—a process moving at different rates in different parts of the world—as well as the changing market landscape, as well as management amid industry challenges.

Announced today (October 10) from Ahmed Al Ameri‘s Sharjah Book Authority (with its own stand at Frankfurt at Hall 4.0, H20), the Dohle-Al Qasimi conversation is the first element of the Publishers Conference’s 12-event program to be released to the news media.

“Discussions and exchanges of expertise serve as the lifeblood of our industry. Now more than ever, we need to put our heads together to build a resilient, future-proof sector.”Bodour Al Qasimi, IPA

As our readers know, last year’s event at Sharjah’s professional program drew 548 registrants, held in a huge tent on the grounds of Sharjah’s Expo Centre, and featuring a huge trading floor noisy with the buying and selling of international translation and publication rights. Sharjah International Book Fair, itself, then, would go on to draw a reported 1,692,463 attendees, with at least 1,630 exhibitors representing 83 countries.

Sharjah’s Sheikh Sultan Bin Mohammed Al Qasimi—who has built his cultural program for the UAE’s third emirate around his dedication to reading and publishing—encouraged exhibitor participation blast year by exempting publishers from rental fees, said to be a move worth 6 million dirhams (US$1.6 million). Sheikh Sultan also allocated 4.5 million dirhams (US$1.2 million) to book purchases from publishers participating in the fair.

The Sharjah phenomenon is unique because of Sheikh Sultan’s persistent support of the world industry’s interaction with his emirate’s programming, including his provision of translation funding, a new booksellers’ conference, the creation of Sharjah’s House of Wisdom facility, his support for the World Book Capitals Network that Bodour Al Qasimi is building, her development of the UAE’s first reprographic rights agency, and the creation of the publishing free trade zone, Sharjah Publishing City with its recently activated Ingram Lightning Source print-on-demand installation.

“I look forward to spending time in Sharjah and learning more about the long-term growth possibilities in the Gulf region, from increasing readership to publishing local voices.” Markus Dohle, Penguin Random House

“I look forward to spending time in Sharjah and learning more about the long-term growth possibilities in the Gulf region, from increasing readership to publishing local voices.”

As Publishing Perspectives readers know, Dohle is not only the chief of the world’s largest publishing conglomerate but has also personally committed US$500,000 to seed the Dohle Book Defense Fund in association with PEN America, a response to a still-rising tide of reports involving parental demands for removal of various books from school curricula and libraries in the United States.

Al Qasimi, looking toward the coming events in Sharjah, says, “As the publishing industry comes out of a pandemic to build a better, more resilient future for all, knowledge on how successful businesses are navigating challenges and undergoing digital transformations, will be key to industry-wide growth and recovery.

“Discussions and exchanges of expertise serve as the lifeblood of our industry. Now more than ever, we need to put our heads together to build a resilient, future-proof sector.”

Today, the Sharjah Publishers Conference is “a platform for thought leadership where the future course of the publishing industry is collectively envisioned by wide-ranging stakeholders.”Ahmed Al Ameri, Sharjah Book Authority

And Al Ameri, speaking for the Sharjah Book Authority he chairs, says, “SIBF Publishers Conference started as a regional nexus for global industry professionals to network and further business interests.

“Today, it’s an equally vital platform for thought leadership where the future course of the publishing industry is collectively envisioned by wide-ranging stakeholders. We’re pleased to host Bodour Al Qasimi and Markus Dohle for a discussion that will share the latest industry intelligence and shine light on actionable strategies to unite in our efforts to support and promote this important industry.”

Al Ameri was  appointed by Sheikh Sultan on September 28 to the Sharjah Executive Council, a reflection of Al Ameri’s years of work in the development of the Book Authority, Publishing City, the annual book fair (in its 41st year this time), its Publishers Conference, and many more programs including the international reading-promotional “Into Books” campaign seen in major world capital cities.

The theme of this year’s show is “Spread the Word,” and programming for the conference is expected to feature new trends in licensing, supply chain challenges, and new opportunities in translation, multilingual publication, and genres the popularity of which is rising, including manga. 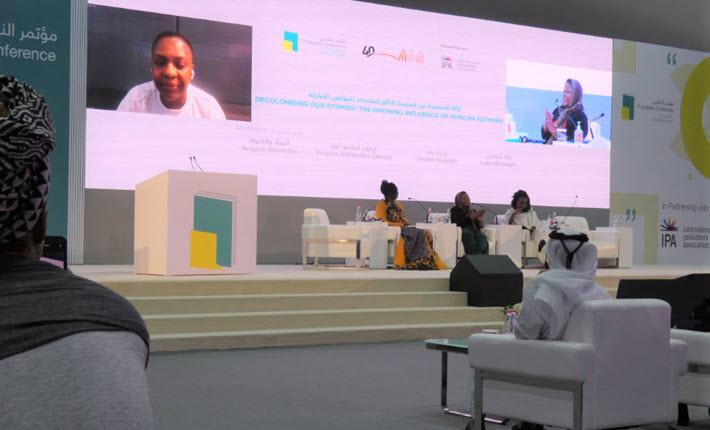 A discussion of the rising influence of African authors at the 2021 edition of the Sharjah Publishers Conference. Image: Publishing Perspectives, Porter Anderson