The 2022 Sharjah Publishers Conference program opens with Guest of Honor Italy, digital publishing in the Arab world, and more. 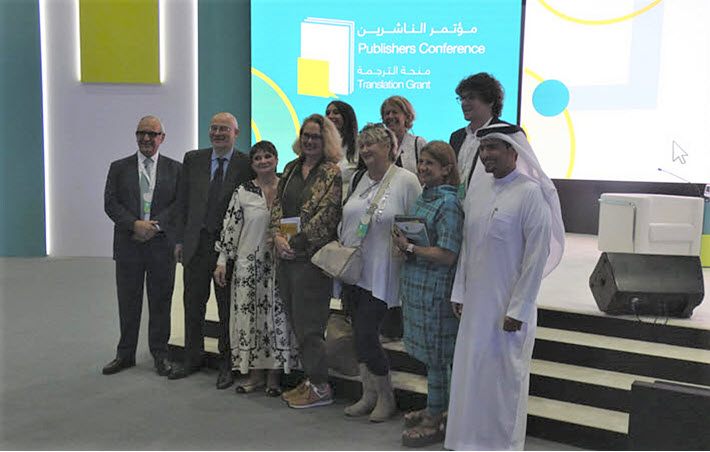 ‘Only 10 Percent of Arabic Books Are Currently Digitized’

In her opening remarks this morning (October 30) at the 12th Sharjah Publishers Conference, Bodour Al Qasimi has implored a packed audience—with a reported 950 trading tables waiting—to make progress in sustainability with a unified pace that has proven hard for the world industry to achieve.

“Let us not leave anyone behind,” she said, having seen first-hand in her travels during the pandemic years how some markets can flourish under the same conditions that pose severe barriers to others.

Italy is one of the markets that experienced wrenching, early onslaughts from the pathogen, of course, and yet managed to report healthy growth in its determined book industry. The country is the 41st Sharjah International Book Fair guest of honor, as it will be Frankfurter Buchmesse‘s guest of honor in 2024.

In an opening panel today, the Italian market statistics that Publishing Perspectives has reported for 2020 and 2021 here and here, respectively, were presented in a printed booklet and in many references from the state for attendees of the Sharjah professional program, seated as it is this year under an even larger circus tent than was used in 2021.

While one section of the Italian market presentation does concede that sales in trade channels of adult and children’s books have shown a 4.2- and 3.6-percent decline for the first half of 2022, there’s much pride in the status that Italy holds, touting its stance as the world’s sixth-largest book market and the fourth-largest in Europe.

As Publishing Perspectives readers know, this conference is the three-day professional program directed by Ahmed Al Ameri, chair of the Sharjah Book Authority, and its popularity and reputation have grown to the point that some 970 publishers applied to participate this year.

After a brief opening this morning in which Al Ameri thanked Al Qasimi not only for her leadership of so many developments in Sharjah’s literary and cultural life but also for her service to the IPA, the program, emceed by Publishing Perspectives columnist Richard Charkin, went into several panel discussions.

Digital Publishing in the Arab World 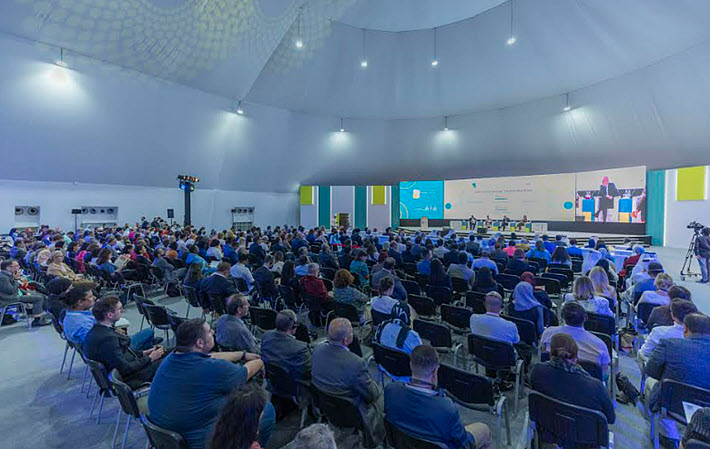 At the opening sessions of the 2022 Sharjah Publishers Conference. Image: SIBF, Nabs Ahmedi

The program today included a centerpiece panel on digital publishing in the Arab world.

While a great many statistical assertions from the engaging panelists punctuated this energetic conversation—with too few attributions or source references for reliable news reportage—some of the top-level descriptive values from the session included what was described as a threefold increase in the demand for ebooks in the region since the onset of the still-ongoing coronavirus COVID-19 pandemic.

“Ebook sales of classical books,” he said, “increased by 14 percent last year in the markets of Egypt, Saudi Arabia, and the UAE. This is apart from the online publications which have increased by 50 percent.”

Salah Chebaro, a Lebanese publisher and the founding CEO of the Neelwafurat platform, pointed to the fact that the annual title count in Arabic tends to lag those of books published in some other languages, said, “We publish fewer than 1 million book titles annually for 450 million people.

“We produced 8,000 audiobooks last year while the United States’ markets had 75,000 audio titles. Despite strong interest from readers, only 10 percent of Arabic books are currently digitized. The ebook market is steadily increasing in demand and we need to tap into its potential.”

In some cases, Doha Alrefae of Jordan’s Rufoof said, Arabic-world publishers are in a stage experienced by their colleagues earlier in the West: a concern that digital editions of books may cannibalize, rather than support, print, as well as digital-content piracy.

“Most publishers shy away from ebooks” Alrefae said, “as they fear the duplication of content. While this is a worldwide issue, regulations are yet to be in place in Arabic online publishing. Technical understanding of the digital footprint, monthly subscription models, and serializing online documents will help curb the unlicensed spread of ebooks.”

Another panel, focused on audiobooks, featured Ama Dadson of Ghana and the coming relaunch of her AkooBooks with a new platform development by Norway’s Beat Technology. You can read about this development in Accra here in our then-exclusive report from September 23.

In that audio panel, moderated by Beat’s Nathan Hull—who appeared at Frankfurt in our Publishing Perspectives Forum program on audio—Beatrice Lin, managing editor of the South Korean company Co.Mint and Storytel Korea—told the audience, “We now have stages for published authors who can see their works being narrated by performance artists. 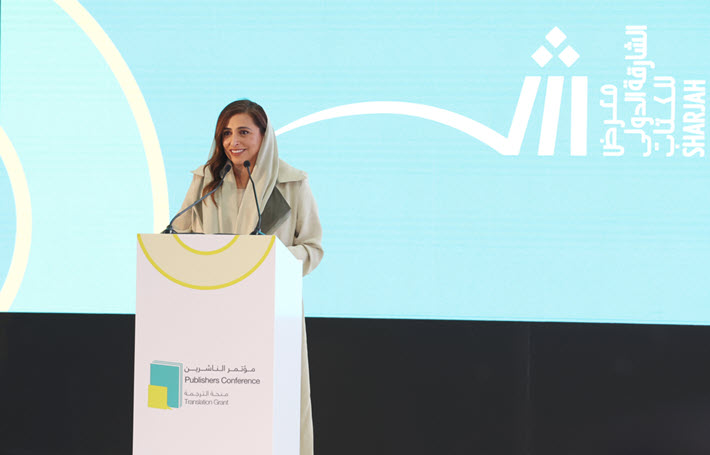 This was, as Al Qasimi pointed out, the “last time I will address you here as IPA president.  Her successor, the International Publishers Association (IPA) president-elect Karine Pansa of Brazil, is scheduled to be on the program on Monday (October 31), in a much-anticipated interview with Bonnier UK CEO Perminder Mann.

“A combination of government overreach and the tyranny of some big-tech algorithms has meant that publishers are still under threat of persecution and censorship for the books they publish, but we will not blink.”Bodour Al Qasimi

In addition, of course, we’ll be following more of the closing of Al Qasimi’s bustling term of office and the transfer of leadership to Pansa and her vice-president Gvantsa Jobava at the IPA’s International Publishers Congress in Jakarta, which quickly follows the Sharjah events in this back-to-back-to back-to back season of far-flung world publishing conclaves.

“Publishing today is facing so many intricate challenges. Some of them are existential, so we cannot face them with one-dimensional thinking and a business-as-usual approach,” Al Qasimi told the audience, specifically referring to the industry-wide need for much deeper efforts in diversity, equality, and inclusion. “We can only face them with a collaborative spirit,” she said, “and a willingness to listen to new voices. …

“The world is changing before our eyes,” she said, “and we all need to do our part to care for our planet. I understand it’s not easy to undo decades, if not centuries, of processes and business models, but we can either change from within on our terms or we will be forced to change by external developments.

“Even though there are some encouraging initiatives to help publishers be more sustainable, my message to everyone in the publishing community is: Let’s learn from our past mistakes, and let’s not move at different speeds when it comes to sustainability. Instead, let’s work as a team globally to create sustainable solutions together so we can move forward together.”

And that’s what had led her to call for publishing taking care not to leave anyone behind. As is well-known, the digitally fluent markets, especially in the West, were able to make the initial pandemic years some of their best, while other markets without the digital infrastructure and culture of those major markets, experienced starkly different effects, including many companies’ closures and struggles.

“A combination of government overreach and the tyranny of some big-tech algorithms has meant that publishers are still under threat of persecution and censorship for the books they publish, but we will not blink,” Al Qasimi said. “We are steadfast in our support of these publishers, just as we are about upholding the freedom to publish principle.”

She closed by asking the Sharjah conference audience to “not forget the wider, and perhaps, the more critical role we can play as the creators of a more peaceful and harmonious world, through the magic of the words we publish.” 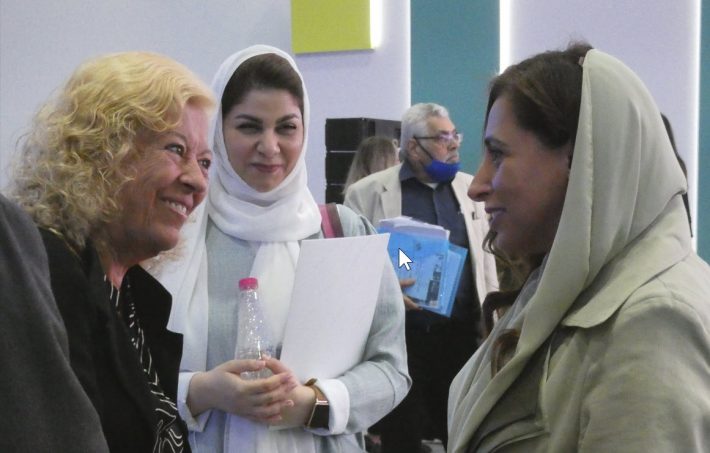 More from Publishing Perspectives on Sharjah Publishers Conference is here,  more on Sharjah Book Authority and its programming is here, more on the just closed 2022 edition of Frankfurter Buchmesse is here, and more on publishing trade shows, book fairs and conferences internationally is here.