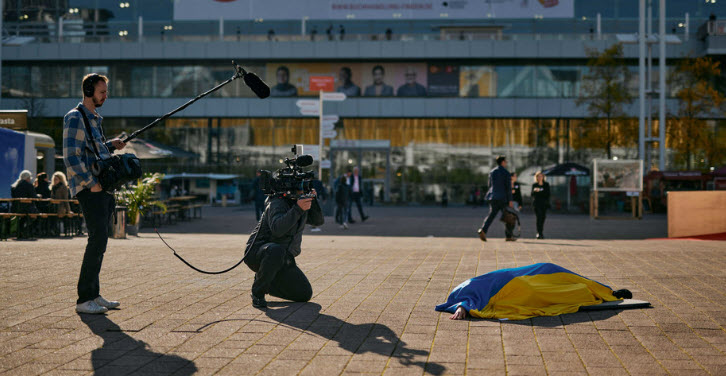 On Frankfurter Buchmesse’s opening day, a flag-draped work of Ukrainian performance art is set on the fairgrounds’ Agora. 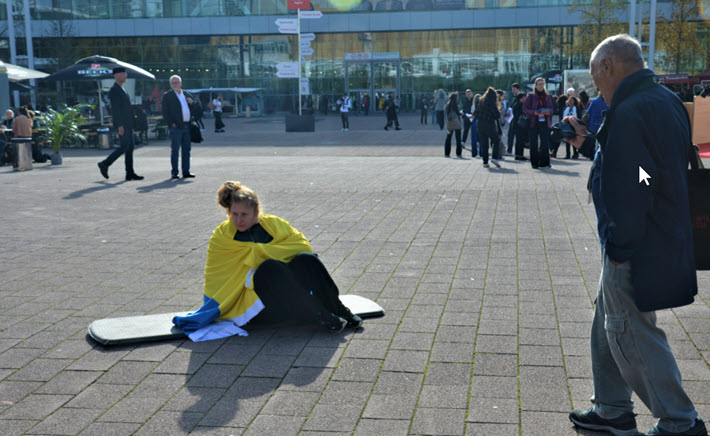 Ukraine’s Maria Kulikovska reprises her performance-art protest of Russian aggression on the stones of the Agora at on the 2022 Frankfurter Buchmesse’s opening day. Image: Publishing Perspectives, Roger Tagholm

Wrapped in the familiar colors of her country’s flag, Ukraine’s Maria Kulikovska staged a silent, moving piece of performance art near an entrance to the Frankfurt Pavilion in the Agora, at the heart of Messe Frankfurt on Wednesday.

The late-morning event on Frankfurter Buchmesse’s 2022 opening day was a reenactment of an unsanctioned performance first seen in St. Petersburg in 2014, part of her “Manifesta Campaign.” In that instance, Kulikovska lay motionless under the flag on the steps of one of the city’s famed museums, the Hermitage.

In April of this year, the artist returned to the work in an eight-day format titled 254 and set on the terrace of the Neue Nationalgalerie in Berlin, near the Mies van der Rohe building.

At Frankfurt, as Kulikovska took her position—first a foot and then a hand emerging from beneath the flag—trade visitors to Frankfurt Book Fair  fairgoers stopped to take pictures. As she slowly emerged like a butterfly from the blue and yellow chrysalis, the symbolism was obvious: Ukraine too, will emerge and once again prosper.

Zelensky and Zalenska to Address Buchmesse

Ukraine’s Maria Kulikovska in position with her protest of Russian warfare at Frankfurter Buchmesse on October 19. Image: FBM, Dominic Driessen

As Publishing Perspectives readers know, Ukraine’s president, Volodymyr Zelensky, will be seen in a recorded video speech at Frankfurter Buchmesse on Thursday (October 20)—in cooperation with the  Federation of European Publishers in Brussels.

Zelensky’s wife, the first lady Olena Zelenska, is also expected to be seen during the book fair. Zelenska is to be a guest in the Brigitte Live “Exciting Conversations” series on Frankfurt Saturday, October 22, at 5:30 p.m. CEST.

The trade show’s “Focus on Ukraine” continues daily in, a program set in Hall 4.0, B114, on a 100-square-meter collective stand with its own stage. The motto of that presence is “Perseverance in Persistence.”

And Saturday’s coming special programming in Frankfurt Pavilion near the site of Kulikovska’s protest, includes a series of Ukraine-specific events in German and English. 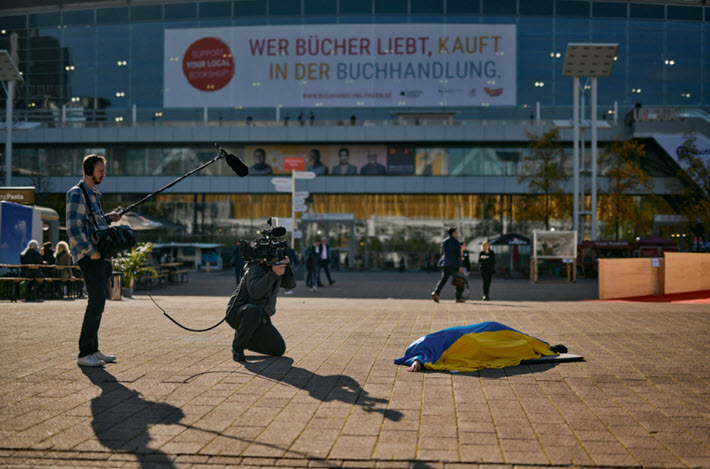 More on Frankfurter Buchmesse is here, more on this year’s Guest of Honor Spain is here, more on guest of honor programs and markets is here, and more on international book fairs is here. More on the Volodymyr Zelensky speech during Frankfurt, with information on more Ukraine-related events at the fair, is here.