‘Developing at a Different Pace’

Their discussion focused on the growing international audiobook market and its wide variety of models for listeners. Hannah Johnson moderated the event.

Baiden talked about the coming launch in Accra of AkooBooks Audio with Beat Technology’s development of a platform and program for the company, which has chosen a subscription model for increased accessibility. Baiden said that a monthly subscription price point equivalent to some US$3 is far more accessible to a user in the region than a single book costing as much as US$25.

Bookwire’s Klingelhöfer said that in the early days, “Audible was driving and dominating the space, [but] a few years ago, we saw more players coming to town. We’re seeing new models and players and there’s a broad acceptance of audio.”

Although Beat Technology’s Hull said he focuses primarily on subscription, he uses the word very broadly. “It’s a many layered space,” he said.

“Our approach is about research in the markets we’re looking at, what the publishers wants, and you adapt to their market.”

It’s also about thinking shorter- and longer-term, Hull said. For example, in the case of AkooBooks and its position as pan-African platform, the company in Ghana is trying to reach millions of people who don’t necessarily have access to listening or reading a book, in which case the evolution is long-term.

And when it comes to the broadening audiobook marketplace, publishers have a wide range of models to consider.

“There are many different approaches for publishers,” Klingelhöfer said. “You have to find the right model for the consumers. At the same time, big groups have priorities on margins and ideas and that’s
a kind of a clash.”

Nevertheless, publishers rely on advice from tech companies, he said. “For medium-size publishers, we act as an aggregator. The revenue-share model can be changed to a minute-based model, and you have markets like Spain or Brazil that never thought about an à la carte [model], they went immediately into a model like Storytel’s.

“I tend to say, ‘Let’s try things out and we can adjust,’ especially when you’re looking at emerging markets.”

Baiden said the key hurdle AkooBooks has had to overcome is that it’s a platform for African voices worldwide, so needs on both the continent and for the diaspora have to be considered. She said the company, led by Ama Dadson, is growing its consumer audience by adopting partnerships.

For example, when AkooBooks signed on with MTN [mobile] to get their app, they went on to gain more than 180,000 subscribers. The platform is starting off with three indigenous languages besides English and French.

In the end, Hull said, each market, whether emerging or in the West, has a variety of needs
because, “Everyone is developing at a different pace.” 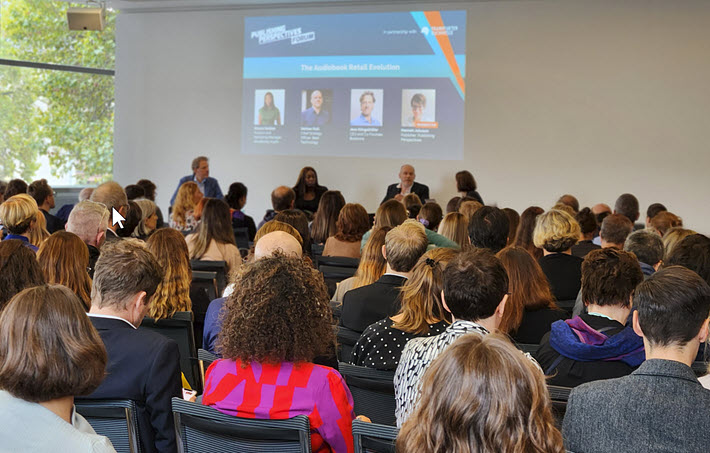 Competition in markets is healthy, the panelists agreed, because it grows the consumer habit, allowing smaller players to come on board. Then, it depends on how platforms use their content.

Windowing—a strategy for managing which book formats through certain channels and for how long—Hull said, is becoming increasingly popular. “Platforms are becoming canny with marketing hooks,” he said, adding that serialization can come into play, as well. “When serials are marketed,” he said, “there’s a 57-percent retention rate.”

In Germany, however, Klingelhöfer said, the market is very diverse, with many types of audiobook listeners, so the targets are different. There’s a 30-percent growth rate in streaming, he said, while still a 12-percent growth for downloads.

Wrapping up the session, participants speculated about Spotify’s announcement that it would be launching audiobooks in the United States with an à la carte pricing model.

“À la carte is a thing,” Hull said. “Even a small conversion rate from Spotify’s sizable user base would constitute a success.”

“It’s very interesting,” Klingelhöfer said, “that Spotify announced that audiobooks are the next big thing, adding that it seemed odd that Spotify would use an à la carte model since it was the company [most likely] to make the subscription successful.

“Maybe they’ll continue to experiment,” he said. “I’m interested to see how Audible will react.”