‘The aim is not to sell books, but to sell narratives,’ says Lithuania’s Ūla Ambrasaitė in Frankfurt’s Publishing Perspectives Forum. 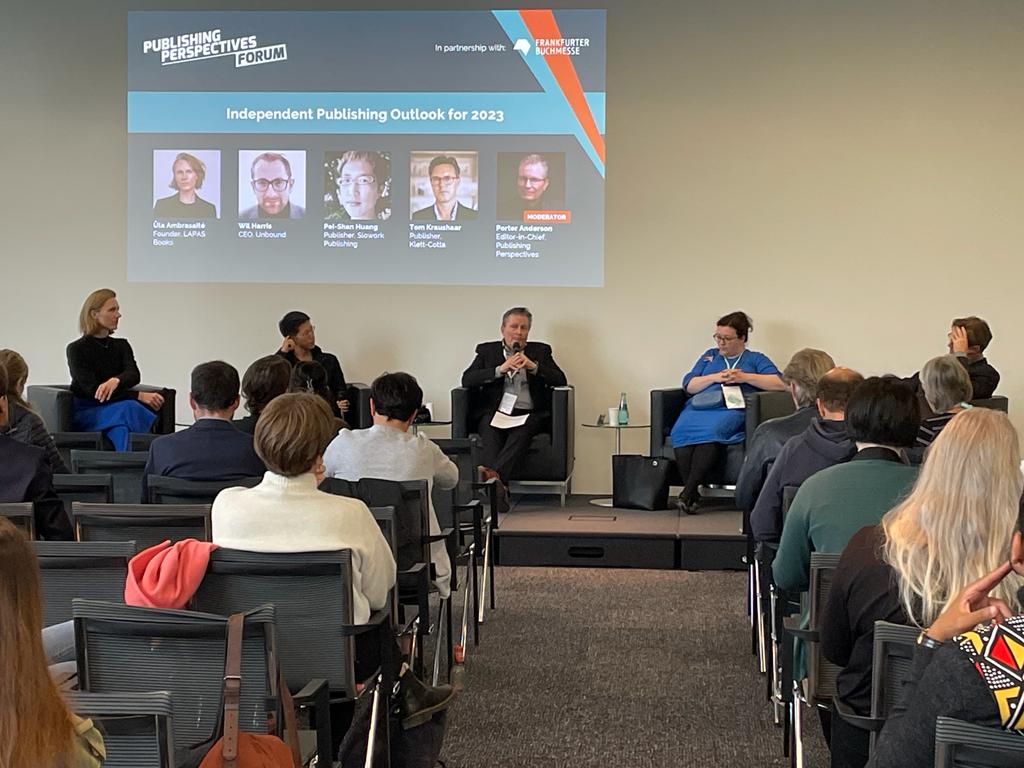 Kraushaar: ‘Community’ as a ‘Counter-Idea to Technology’

Each operating with different business models and in a range of content and formats, they all highlighted the impact that independent publishing can make  in terms of direct and meaningful connections with consumers.

Discussing the future for independent publishers were Tom Kraushaar, publisher of Klett-Cotta, based in Stuttgart; Ilona Chavasse, head of rights at London’s Unbound; Pei-Shan Huang, publisher of Slowork Publishing in Taiwan; and Ūla Ambrasaitė, founder of Lithuania’s LAPAS Books.

Klett-Cotta is among the oldest German publishing houses, founded in the mid-17th century. According to Kraushaar, the publisher, which is part of a bigger educational group, has the opportunity to act very independently, as it’s the only trade publisher in the group.

He said there are both pros and cons to competing with larger publishers, one of which is technology.

As publishers increasingly rely on technology and social-media influence to publicize their books, he said, smaller houses are less able to afford to use that space as well.

“With the big book groups,” Kraushaar said, “a lot of what they do goes through technology. They use technology to be more efficient, to be more profitable.

“But, I think for the independent publishers it’s harder to do that. It doesn’t have the same effects. So community is what I would call our counter-idea of technology.”

Chavasse echoed a similar issue at Unbound. With increased reliance on social-media influencers to promote books, rates go up, making it unaffordable for smaller publishers to reach the online market.

Ahead of Frankfurter Buchmesse, Unbound CEO Wil Harris told Publishing Perspectives that many larger publishing companies “buy up” Google keywords, making it more expensive for the company to sell its books. With this, Chavasse questioned how long online influence will continue to be the main channel for publicizing titles.

“It starts with people giving their direct opinion, but then it becomes steadily more and more business-like until you get to a point where it’s very clear that a person’s been paid,” Chavasse said. “Books are so intimate, it seems laughable to take direction from someone who has been paid for their positive option. I think it can only go so far.”

Many independent publishers put significant effort into building community and creating relationships with readers. At LAPAS Books, Ambrasaitė said she focuses not on selling books but on sharing stories, and connecting authors with readers.

According to Ambrasaite, after working for a larger publisher where the main focus was on selling books, she was inspired instead to provide audiences with topics that are interesting to them and communities that are easily accessible.

“When I started LAPAS,” she said, “there were only a few small publishers [in Lithuania]. So, we used a lot of opportunities that were overseen by big publishers like creating an audience, doing talks, organizing exhibitions, doing things around the book rather than just selling the book.”

Similar to the progress of LAPAS, the Asian company Slowork has worked to expose its consumer base to a range of content.

Founded in 2013, Huang said that Slowork is one of a very few graphic-novel publishers in Taiwan. Growing a lot since then, the company began with just Huang, who would work on the stories, hire artists, and for the first few years, even print and bind the books herself.

In the last decade, Huang said, she has introduced Taiwan to the art of both nonfiction and fiction graphic novels, growing a backlist of both English and Mandarin books, and attracting support and funding from the government.

Huang said her hope is to continue growing the number of graphic novels available in her country—and in other Asian markets in which she works—and to build a community that’s passionate about them.