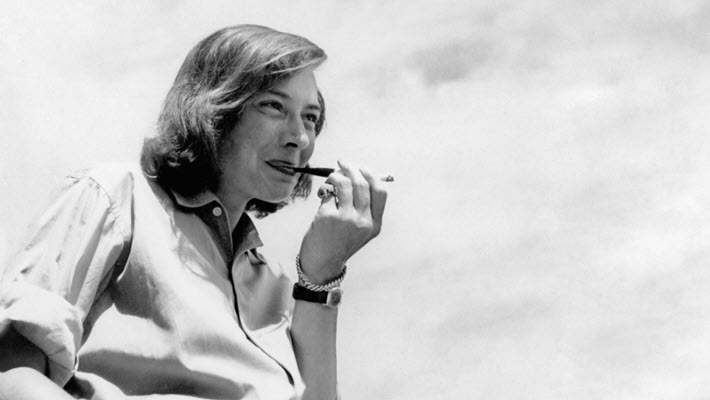 ‘Access to the girlfriends’: ‘Loving Highsmith’ by filmmaker Eva Vitija offers a new glimpse of the elusive author Patricia Highsmith. 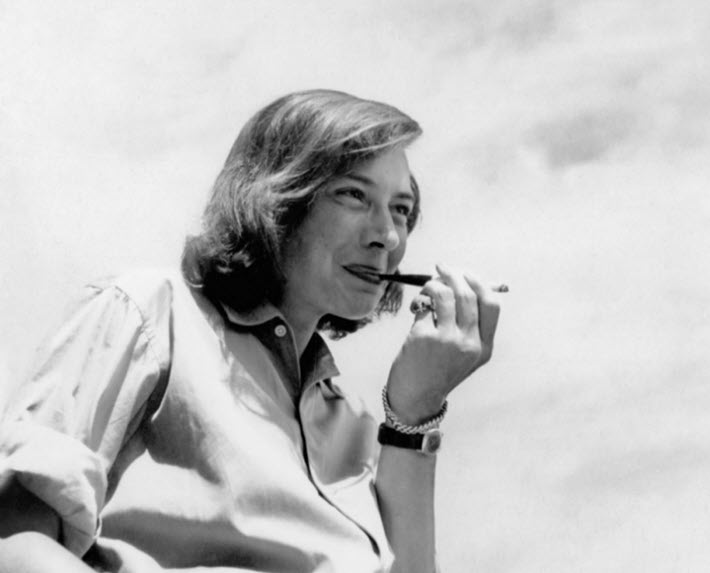 If anything, Loving Highsmith might have been titled Redeeming Highsmith—something being discovered Friday night (September 2) by filmgoers in New York City. 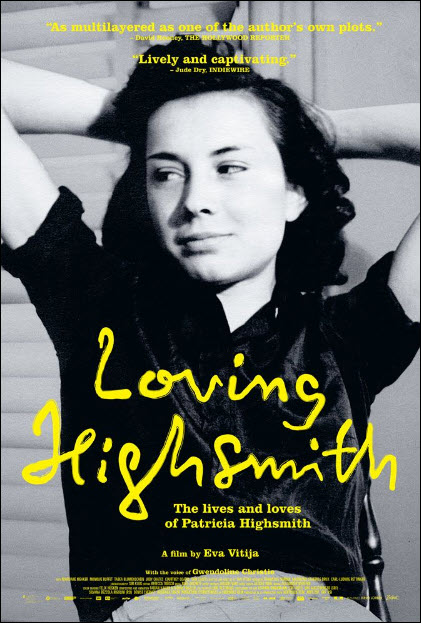 The release has had its American premiere and runs through Thursday (September 8) at Film Forum on Houston Street, west of Sixth Avenue. The house is running a “Highsmith on Screen” series of films alongside Loving Highsmith.

The show’s Los Angeles debut is set for Friday (September 9) at Landmark’s Nuart Theatre on Santa Monica Boulevard. More US cities’ screenings in association with Kino Lorber are listed through November here by distributor Zeitgeist Films.

And as to the film’s revelations about its subject’s temperament, “You’re reading that absolutely right,” the documentary’s writer and director Eva Vitija says in an interview with Publishing Perspectives from Zurich after an advance screening.

“This was to my astonishment, too, because of course I, also, had this view of her, a very somber image, at first.”

If anything, that dark notion of author Patricia Highsmith had been compounded for Vitija because Highsmith had lived her last years in France and Switzerland, where an aura of “this old, very grumpy” woman had lingered.

“And when I started to research,” Vitija says, “I discovered this totally different person. It was also one of the reasons I wanted to do this film, because I really couldn’t explain how it’s possible that somebody could have such a different image to what I encountered when I spoke to people who knew and loved her.

“I thought that this would be the last moment to catch that kind of knowledge.” And her film became what she now terms a “love-biography.”

In Patricia Highsmith’s notebooks were comments that became “a big advantage for me … a kind of permission to expose some things that probably she wouldn’t like to have had exposed so much during her lifetime.”Eva Vitija, filmmaker

Vitija’s decision to focus on personal acquaintances and lovers of the author best known for The Talented Mr. Ripley  (1955) and her debut Two Strangers on a Train (1950) rendered her something close to an oral-history specialist tracking down elderly World War II veterans. Vitija spent two years hurrying to identify, find, and interview as many people as she could for the 83-minute Loving Highsmith‘s singular look at the prodigious writer whose estate, as we wrote in February, is managed by the Zurich-based publisher Diogenes.

The hunt for Highsmith’s intimates included some heartbreaking near misses.

“At one point,” she says, “I was looking for this English woman, and I didn’t have her correct name,” because it had been anonymized in biographical mentions. “After two years of searching and not finding her, someone let her real name slip. I was really lucky. Immediately I found the house. And literally just when we were getting there, there were people moving out the furniture.”

The woman had died shortly before Vitija’s arrival. “So I was a little too late,” the filmmaker says.

She shares this account of such a critical piece of bad timing as an anecdote in what she describes as a fascinating unspoken camaraderie among the women who were close to her. They guard each other’s names, she says, and hold each other’s confidences in a way that the filmmaker came to realize is quite touching, even when frustrating.

Vitija: ‘When You Deal With Something So Private’ 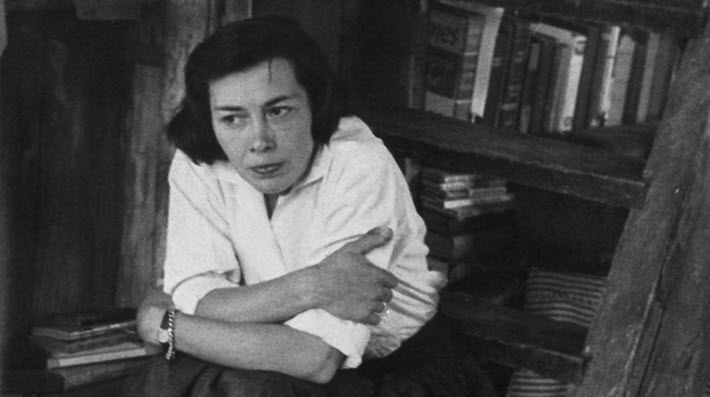 Vitija is a thoughtfully witty and engaged conversationalist who concedes that today, she’d love to have been one of Highsmith’s dinner guests. But as a child, she and her family summered in the Swiss village of Tegna, near Ticino’s Locarno to which the aging Highsmith had moved–and had gained a reputation as a difficult, unpleasant recluse. 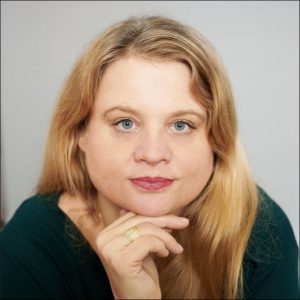 The filmmaker says she became so committed to “this detective work” of doggedly trying “to get access to the girlfriends,” that her producer Franziska Sonder helped her know when it was time to move from research to writing the film.

After her death in 1995 at age 74, Highsmith’s voluminous journals were found, and parts of Vitija’s research, of course, turned on what she could learn from them. (In 2021, Diaries and Notebooks, 1941 to 1955, edited by Anna von Planta, was published by Diogenes with translations by Melanie Walz, Marion Hertle, Pociao, Anna-Nina Kroll, and Peter Torberg. In the States, WW Norton’s Liveright published the English edition.)

“There are some years that are not covered by the notebooks and diaries,” Vitija says about big holes that opened up for her in the time line. “So you don’t really know what happened there. You don’t know if she threw them away because there was something she didn’t want to expose. This is always a question when you deal with something so private as diaries. Is it okay to reveal all those things? But for us, it was pretty clear that it’s going to be public at some point.”

In Vitija’s film, you see animated reveals of some of Highsmith’s notations, made in a cramped hand, notes squeezed into the margins of other notes, “making comments on older and older notes,” as Vitija describes it.

“She started to write more private things in the notebooks, and that was a big advantage for me. She also said that although she didn’t want [her sexuality] exposed during her lifetime, her life probably was going to be looked at through the glasses of homosexuality at some point, and that it was okay. So this was for me a kind of permission to expose some things that probably she wouldn’t like to have had exposed so much during her lifetime.”

Highsmith: ‘I Never Wrote a Mystery in My Life’

It’s hard to imagine that even a guarded Highsmith might have objected to the bell-like voicings of excerpts from the diaries by Gwendoline Christie (Game of Thrones and Top of the Lake). Vitija’s film also benefits from composer Noël Akchoté’s luminous score—at once made for the boulevard and yet determinedly colloquial. An album of music for the film, released in March with jazz guitarists Bill Frisell and Mary Halvorson, is available from France’s Ayler Records here. 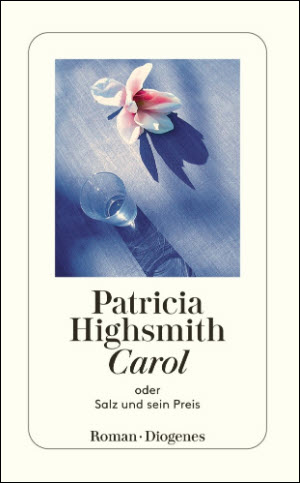 ‘Carol,’ originally ‘The Price of Salt’

Early on, you hear Marijane Meaker, a one-time intimate of Highsmith, say, “She was not a forward person at all. She did not assume she was entitled to anything. That was nice, in a way. Certainly, she was very famous when I met her.”

And you quickly hear the author saying that from her mid-teens, “I would get creepy ideas.” Moments later: “I’m always characterized in mystery and suspense, but I never wrote a mystery in my life. I just write a story. And sometimes it has violence in it and sometimes it has a murder, and therefore it’s called ‘crime.'”

Vitija has written her Highsmith story with both deference and patience. She mines contemporaries’ memories of Highsmith searching for gay bars and being a ready and willing partier among women who had taken her book The Price of Salt (1952)—later titled Carol—to their hearts. And she contrasts moments with Highsmith’s Texas family members with the fact that by 1963, Highsmith would be living in Europe and ending up a bewildering cousin to her Lonestar State clan.

The film succeeds perhaps best through Vitija’s restraint. While filmgoers will find that she has, indeed, somewhat redeemed the writer from parts of the most disturbing lore about her character and mystery, she hasn’t quite fully revealed a personality who clearly did not want the brightest light of day on herself.

“She had a lot of ego,” Vitija says from the slanting rays of her own late-afternoon salon in Zurich. But Highsmith “doesn’t seem to have been driven to have that ego be seen, you know? To be a celebrity. She was aware of this. She was totally aware of it at some points, but she wasn’t really going for it.”

Despite an address book filled with influential names, Vitija says, “I think it was not so important to her to be famous.”

Even after working for years to track down the real Patricia Highsmith to make this film, Eva Vitija has given her subject what might have been the most appreciated gift of all: license to keep ducking around the corners of our curiosity–to give us all the slip.

More from Publishing Perspectives on adaptations of books to film and television is here and here. More on rights and licensing is here, and more on news of publishing from Switzerland is here.