‘Prejudice is prejudice, no matter who is at the receiving end,’ IPA’s Bodour Al Qasimi tells the Estoril Conferences audience in Cascais. 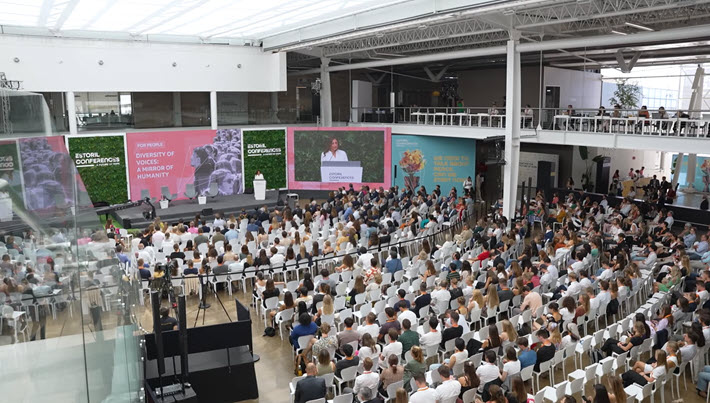 ‘A Moral Obligation for Each One of Us’

Staged in its seventh edition on September 1 and 2, the Estoril Conferences (the plural name is correct) at Cascais featured speakers including journalist Anne Applebaum; writer and theorist Francis Fukuyama; and the International Publishers Association (IPA) president Bodour Al Qasimi.

For Al Qasimi, this was a stop she made in a trip during which she also met with publishers and member-associations of the IPA in both Portugal and Spain. Such association-related travel, as our readership knows, has been a hallmark of Al Qasimi’s two-year presidency, an outreach she undertook in many cases to gather national and regional insights into the impact of the coronavirus COVID-19 pandemic on publishers and the infrastructure that supports them.

That makes her comments as an Estoril speaker especially interesting because they let us hear Al Qasimi speak outside the publishing community, and in this case her message was especially compelling. The attendees of the biennial Estoril program—based at the Nova School of Business and Economics—have reached almost 10,000 people from 105 nations in their seven years, fielding 315 speakers who are drawn from fields in political, business, academic, and civil interests.

A goal of the Estoril framework is to offer thinkers, particularly but not exclusively younger ones, a chance to engage in debate about “the most important and global issues” and to consider “taking the wheel and leading the way.”

And Al Qasimi—the founder of the widely respected PublisHer network which supports women in international book publishing—made a decision to speak to the Estoril assembly about a case of  “the willingness of institutions and individuals to marginalize an entire category of society in order to stay on-trend.”

That “entire category” to which she referred to make her point?—is white men.

She outlined for her audience the incident you may recall in 2015 when it was found that the poetry published in a Best American Poetry anthology as the work of  a woman named Yi-Fen Chou was actually by a librarian and poet from Fort Wayne, Indiana, Michael Hudson.

“In defending his decision to use a fake pen name,” Al Qasimi told her Estoril audience, Hudson said that his poem used in the anthology had been rejected 40 times by journals when submitted under his own name but only nine times under the name Yi-Fen Chou. The pen name, as Corinne Segal at PBS and others would report, apparently was that of a woman whose family had emigrated to the Fort Wayne from Taiwan.

“He decided to submit the same piece using a pen name of a non-Caucasian female,” Al Qasimi said, “and it was accepted. His decision created an uproar in the literary world, and the story divided the literary society in America.”

“It may surprise you that I chose a white male’s story as an example to highlight issues relating to diversity and inclusion.“Bodour Al Qasimi, IPA

Al Qasimi pointed out that the incident coincided with rising pressure in American publishing for more diversity in the industry’s makeup and output. “This new climate,” she said at Estoril, “led to a discourse that favored writers with diverse backgrounds and discouraged young white male writers from being published.”

Anticipating surprise in her listeners, Al Qasimi said, “It may surprise you that I chose a white male’s story as an example to highlight issues relating to diversity and inclusion. I am an Arab and Muslim female publisher whose priority for more than a decade has been to empower women and support their right to achieve the highest success in what they want in their professional careers.”

We’ll pick up her speech at this point, having requested a copy from Al Qasimi’s office:

“The story of Michael Hudson is the story of millions of women, and millions of voiceless people who suffer from marginalization in silence and pain. This story is about prejudice. It’s about the willingness of institutions and individuals to marginalize an entire category of society in order to stay on-trend. But prejudice is prejudice, no matter who is at the receiving end.

“I personally have had my fair share of prejudice in my career, and it’s tough.

“It’s tough when you know you are being judged not by professional merit, but by your name, your skin color, or your gender.

“Thankfully, I was blessed with determination and lots of patience to combat prejudice and rise through the ranks of the publishing industry to become president of the International Publishers Association, only the second woman to do so in its 126 years. I have to admit, though, I thought of quitting more times than I can remember throughout my professional journey. The pressure of prejudice and people’s preconceptions were sometimes just more than I could handle.”

In asking rhetorically, “Why is it so hard for human beings to accept each other’s voices and stories as part of the larger human narrative?” Al Qasimi went on to cite a verse from the Quran: “And among His wonders is the creation of the heavens and the earth, and the diversity of your tongues and colors. For in this, behold, there are messages indeed for all who are possessed of innate knowledge!”  (Quran 30, 22)

‘The Diversity of Your Tongues and Colors’ 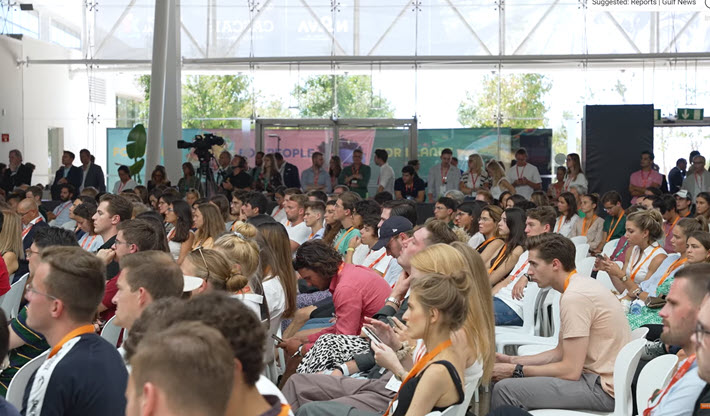 Al Qasimi told her young audience that ignorance is “a silent enemy that prevents us from not seeing others as they are but instead through the lenses of our belief systems.”

She told them at Cascais, “It is a moral obligation for each one of us to look into our hearts to try and understand the intrinsic sources of our own prejudices. And also to create in our hearts a space for understanding, acceptance, and respect for our human diversity. And you know we often talk about understanding.”

Referencing Malcolm X’s assertion that understanding creates love, patience, and unity, Al Qasimi said, “Understanding requires a hard look in the mirror to find the shadows in our reflection. Hard as it is to do, this is the only way out of division and disunity and chaos, which threaten all of us not just some of us. The publishing industry’s role is crucial in this context.

“What happened to Michael Hudson has also happened to scores of female writers, indigenous writers, writers with opposing views, and others. Even JK Rowling, the Harry Potter author was advised by her publishers to disguise the fact that she was female, by removing her first name from the book, so only her initials remained. It shouldn’t have happened, but we know that this is a challenge, and we are working hard as an industry to promote more diversity and inclusion in the teams of our publishing houses, because if staff at publishing houses are not representative of a broader spectrum of society, the books they champion likely won’t be either.”

”Who Is Represented and Who Is Marginalized?’ 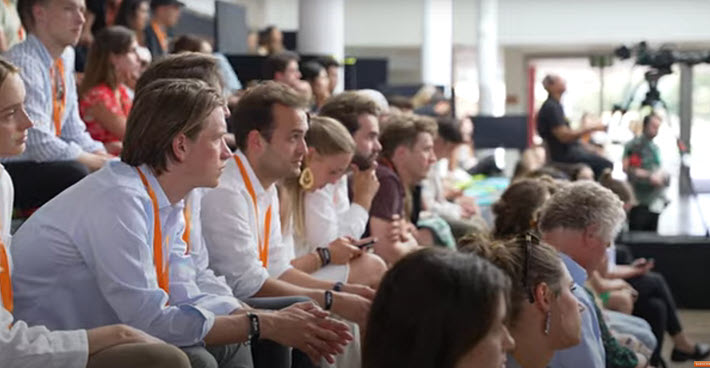 And then Al Qasimi handed her audience the special truth of “vote with your feet,” as it’s said in several cultures. In an evolving international book business, the consumer base now is recognized as newly empowered, a market force that drives publishing decisions once thought best handed down from knowing editors.

“Your role as readers is just as important as our role as publishers. What you choose to read, and what you demand to read influences our decisions about which authors to promote.”Bodour Al Qasimi, IPA

“Your role as readers is just as important as our role as publishers. What you choose to read, and what you demand to read influences our decisions about which authors to promote.

“So, I invite you all today to make a commitment, to pick up a book by an author you wouldn’t normally read, something outside your comfort zone, read it and then share it with your friends and family.

“For us to have even the slightest hope of a peaceful future together, we must hold a mirror up to our society and check who is being represented and who is being marginalized, this is the divine and natural way for humanity to exist.”

Bodour Al Qasimi will conclude her presidency of the International Publishers Association this year, and Karine Pansa of São Paulo is expected to be confirmed by the IPA membership to take up the presidency after her two years as vice-president.

We’ll embed here a video from International Publishers Association that compiles parts of Al Qasimi’s talk at the Estoril Conferences.