In a press briefing with international news media members today (September 8), Frankfurter Buchmesse president and CEO Juergen Boos has said that trade-visitor and exhibitor registration levels are running so strongly that after checking sales figures this morning, he believes the trade fair can reach overall numbers of some 70 percent of the show’s size in 2019.

He pointed out that North American trade-visitor registration at this point, particularly from the United States, is at “about the same” level as it was in 2019, while major publishers’ stands at Messe Frankfurt this year will be at roughly the same size as they were before the onset of the coronavirus COVID-19 pandemic.

As we’ve reported previously, there are more than 4,000 exhibitors registered, accounting for international trade participation from at least 80 nations. And in the last few weeks, professional programming elements of the 74th edition of Frankfurt Book Fair have expanded to feature full days of competing and complementary events.

With the Literary Agents & Scouts Center (LitAg) sold out and a waiting list in place, many international trade visitors and publishing leadership figures are rushing to finalize travel arrangements.

News today has included word that King Felipe VI and Queen Letizia of Spain will join German president Frank-Walter Steinmeier at the opening ceremony of the world’s largest book publishing trade show on the evening of October 18. During that event, Guest of Honor Spain will open its pavilion under its slogan, creatividad desbordante, meaning overflowing creativity. There’s a full site dedicated to Spain’s programming and concept here.

Many will now be downloading Frankfurt’s trade show’s app to help organize their schedules around business meetings and professional programs. More features new this year have to do with organizers’ new context and plans to handle any reported instances of discrimination, and you can read details of these plans and innovations here.

And among the many fellowship programs included in this year’s Frankfurt framework, Boos highlighted the fact that the Invitation Program fellows includes key cohort of African publishers, that outreach enhanced by cooperation with the International Publishers Association‘s Africa Publishing Innovation Fund, a program very familiar to Publishing Perspectives readers. 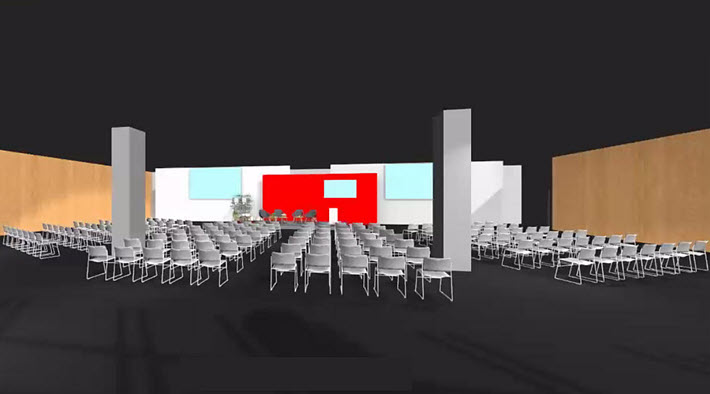 A design rendering of Frankfurt Studio, the television production facility in Hall 4.0, this time in its second year. Image: FBM

The professional program has continued to expand for the 2022 Frankfurt Book Fair, with several focal points.

You can follow our program development as we add more speakers and details at our site for the Forum here.

And while the Publishing Perspectives Forum is the venue our team here is most familiar with as we program its events and speakers, the fair’s overall calendar of events will be populated soon online with more events and personalities making appearances.

Here are more venues you’ll want to watch as their programming is rolled out in detail:

Focus on Ukraine and the assault on it opened by Vladimir Putin on February 24, for example, takes special focus this year. With a motto of “Perseverance in Persistence,” a special evocation of Ukrainian culture and programming is to be centered at the Ukrainian country stand in Hall 4.0, featuring some 100 square meters and events curated by the Ukrainian Book Institute in cooperation with the Goethe-Institut. There’s also a program being developed for publishers from Ukraine and nearby countries, a part of the trade fair’s extensive fellowship programming.

Frankfurt Pavilion is making a return to the Agora, and will have a full slate of cultural and political programming available.

Frankfurt Kids Conference runs 9:30 a.m. to 12 p.m. on October 19 in the Conference Center’s Illusion Room. In this program, specialists will talk children’s books in a socio-political content and from an international viewpoint. Ticketing information is here.

The MasterClass series returns this year, for companies looking to present and promote their businesses prior to the opening of the trade show. Running from October 10 to 14, this digital series will again require audience members to apply for access. And another digital event planned for the fair is the online networking session called “The Hof” at 5 p.m. CEST on September 8 and 29, and on October 19. 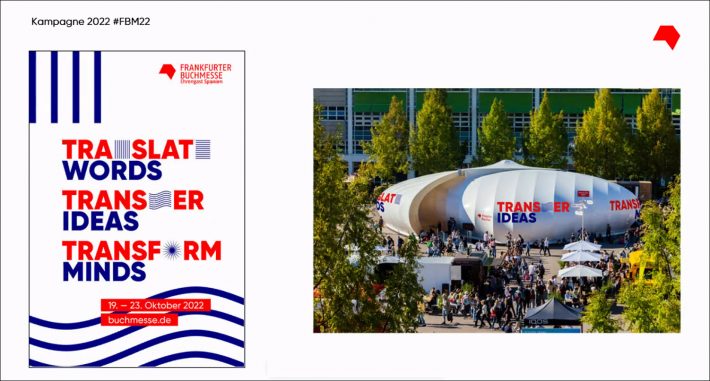 Publishing Perspectives did have a chance at the international edition of the news conference today to ask about the rationale for the decision to welcome public (non-trade) visitors to Buchmesse on “Frankfurt Friday” (October 21).

As Boos pointed out, offering the public a chance to arrive on Friday, rather than waiting until Saturday, effectively expands by one day the book-festival aspect of the show, which includes dedicated public-event programming. This gives “our European customers,” he said, a better chance “to present their authors to the German public. And on the other hand, we’re going to focus from Wednesday to Friday a lot more on our trade visitors. So we have more dedicated programming, a good compromise,” while also ensuring that the fairgrounds don’t become too crowded when book and author fans join the events for the weekend.

Boos also had good news about the ability of many trade visitors in the Asian markets to travel to Frankfurt this year.

There had been concerns around new COVID-19 outbreaks in recent months in parts of Asia, and though mainland China’s industry players may encounter travel limitations, Boos said that publishing colleagues from Hong Kong are expected, as are delegations from Taiwan, Korea, and Japan.

We’ll have more specifics on programming and other news as it’s developed by organizers. The best way to track this is at our top-bar navigation tab “Frankfurt 2022” where our latest information and guidance will be found most easily.