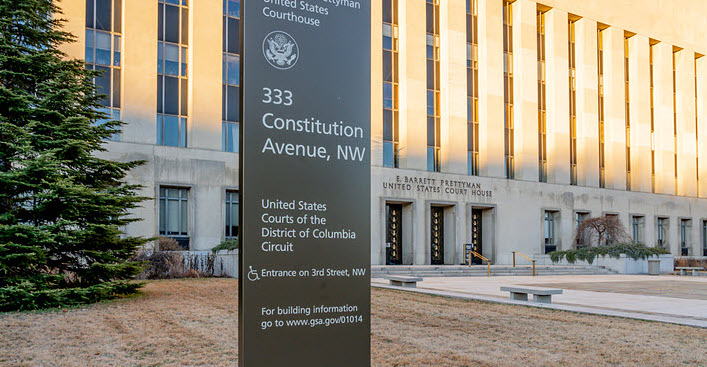 The United States’ Department of Justice is suing to block the Penguin Random House-Simon & Schuster merger deal struck in late 2020. 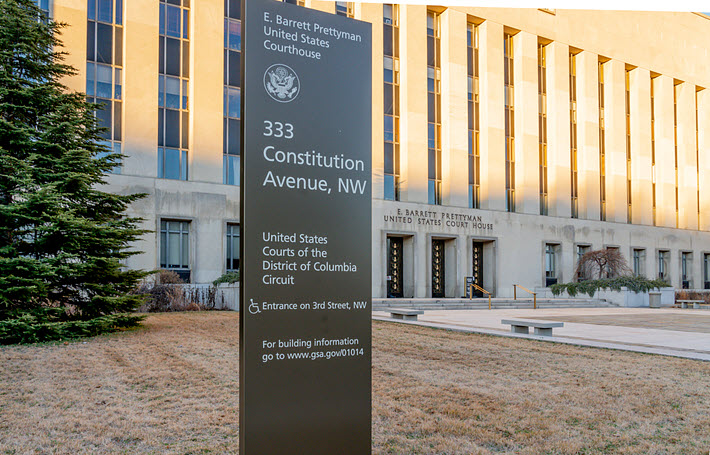 The Barrett Prettyman Courthouse in Washington, where the US Department of Justice’s antitrust suit is set. Image – Getty iStockphoto: JHVE Photo

The Antitrust Trial Opens in Washington

It was on November 25, 2020, when it was announced that Penguin Random House‘s parent company Bertelsmann had struck a deal to buy Simon & Schuster for US$2.175 billion.  And it was nine years and a month ago—July 1, 2013—when another merger was completed, the one that brought Penguin and Random House together.

Oral arguments are scheduled to begin today (August 1) in the antitrust suit filed by the United States Department of Justice, a case with which the government proposes to block the merger of PRH and S&S.

The case, being heard by Judge Florence Pan at Washington’s US District Court for the District of Columbia (the Prettyman Courthouse), brings home the fact that those who object to consolidation among the book business’ biggest players aren’t wrong that things actually are moving quite quickly. These two major inflection points are occurring in under a decade.

That’s one reason that this American antitrust trial has a lot of interest for our international readership, of course. The case in Washington is focused on Penguin Random House as the States’ biggest publisher and Simon & Schuster as one of PRH’s sisters in the US “Big Five”—which could become the “Big Four,” if Bertelsmann and Penguin Random House are successful the bid to buy S&S. These industry-leading companies, however, have profound presence in many markets of world publishing, and so, in fact, does an issue on which the government’s case turns very heavily: author compensation.

In the States, antitrust challenges often are based on questions of monopolies—companies that become the sole or main providers of certain products or services. But this one is positioned by the Department of Justice as a question of what the government says is a risk of monopsony—in which a company might become the sole or main buyer of certain products or services. The question at its most simplistic level, then, becomes whether a PRH-S&S merger would create a company so large that it would control the vast majority of “top-selling” authors’ payments.

The way this key argument is expressed in the government’s complaint filed with the court is this: 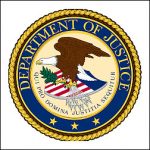 “If the defendants’ [PRH; Bertelsmann; Paramount Global, parent of ViacomCBS; and S&S] proposed merger is allowed to proceed, Penguin Random House would be, by far, the largest book publisher in the United States, towering over its rivals.

“The merger would give Penguin Random House outsized influence over who and what is published, and how much authors are paid for their work.

“The deal, which was arranged by the two publishers’ parent companies, Bertelsmann SE & Co. KGaA, (“Bertelsmann”) and ViacomCBS, Inc. (“ViacomCBS”), would likely harm competition in the publishing industry and should be blocked.” 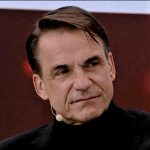 Those who saw Publishing Perspectives’ Frankfurter Buchmesse-opening interview in October with PRH worldwide CEO Markus Dohle will remember that one thing his company and Bertelsmann have stressed is that if the merger is approved, Simon & Schuster’s imprints and Penguin Random House’s imprints will continue to bid against each other–this, of course, to maintain rather than constrain competition. While the government reportedly wanted to exclude testimony to this, Judge Pan reportedly has ruled that she will allow it.

Recent pre-trial hearings, as reported by Katy Hershberger in Publishers Lunch, also have included agreements to anonymize both the names of authors and agents during the court proceedings.

And another reminder that the coronavirus COVID-19 pandemic is not over: the judge is requiring all present in the courtroom to wear a high-quality mask (N95 or the KN95), Hershberger writes. Attendees are asked to us rapid antigen tests before each day’s session and to avoid coming to court if testing positive.

Messaging from PRH and S&S

In a memo to staff last week, Simon & Schuster CEO Jonathan Karp wrote, “A few Simon & Schuster executives, including me, will testify, as will executives from Penguin Random House and other publishing companies, an executive from Paramount Global [Viacom CBS], literary agents, and some authors.”

Karp goes on to express his support for the merger, writing:

“As I’ve told you before, I am hopeful that Simon & Schuster will become part of Penguin Random House. 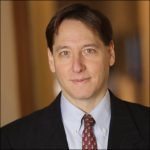 “I spent 16 years at Random House, and I know their culture is a lot like ours—wholeheartedly devoted to books and deeply committed to its employees and authors. Penguin Random House’s parent company, Bertelsmann, has been in the book business since 1835 and shares Penguin Random House’s profound commitment to improve public readership. I strongly believe that Penguin Random House will be an excellent steward of Simon & Schuster’s legacy, and that we, and our authors, will benefit greatly from becoming a part of this superb publishing company.

“Regardless of the outcome, Simon & Schuster will be celebrating its 100th birthday in April 2024. In our storied history, we have changed ownership seven times, and we know there will be an eighth. Each time, we have emerged stronger, and I cannot wait to see what lies ahead in our second century.

“Meanwhile, the best and most important thing we can do is to remain focused on achieving excellence on behalf of our authors and their books, assured in our purpose. Thanks to all of you, our performance has been outstanding since the sale process began more than two years ago, and I have every confidence in our ability to work with our accustomed skill and professionalism to bring important voices to readers around the world.”

As today’s start of the antitrust trial approaches, Penguin Random House has issued a comment from Dan Petrocelli of the legal firm O’Melveny. Petrocelli, lead attorney for Bertelsmann and PRH, is quoted saying that the proposed merger can deepen industry competition, not dilute it. 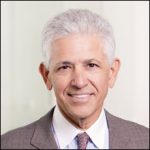 “Penguin Random House’s acquisition of Simon & Schuster,” Petrocelli says, “will strengthen the already vigorous competition among publishers to find and sell the books readers most want to read.

“More competition to sell books means more competition to acquire them from authors. The Department of Justice’s lawsuit misunderstands that competitive dynamic and many others. As [the] trial will show, this acquisition will benefit readers, booksellers, and authors alike.”

And in talking points provided to the news media by Penguin Random House, stress is placed on the government’s position’s focus on compensation and that “top-selling” band of authors. PRH’s commentary provided to Publishing Perspectives reads, “The Department of Justice does not allege that the acquisition will reduce the number or diversity of books being sold to readers.

“Nor does the [government] allege that the acquisition will cause harm to the vast majority of authors. All evidence indicates the opposite. The Department of Justice instead focuses on a very tiny and arbitrary sliver of the market, certain authors who receive US$250,000 or more in advances for their book titles. The Department of Justice seeks to block this transaction to protect the highest paid authors even though these authors have the most bargaining power against publishers, making them least likely to be targeted for a price decrease.”

Further to this point, Penguin Random House says in its pre-trial remarks, “The Department of Justice deeply misunderstands competition within the book publishing industry. Authors currently have numerous publishing options. By focusing only on the ‘Big Five’ publishing houses, the Department of Justice is willfully ignoring countless mid-sized and smaller publishing organizations’ influence throughout the marketplace. These publishers routinely acquire books from prominent authors like JK Rowling, Michael Lewis, Dolly Parton, Paul Krugman, and others.”

And from the PRH pre-trial brief filed with the court: “Acquisitions are about more than just the advance. Authors (through agents) negotiate other terms, such as the scope of the rights (allowing the author to profit elsewhere from excluded rights), higher royalty rates, accelerated payments, and other financial perks.

“Authors also may bet on themselves and forgo an advance in favor of a profit-sharing arrangement that might provide higher upside payments. And monetary terms are only one part of the story. Authors also care about the relationship with the editor: they seek an editor who shares the author’s vision for the book and often an editor who will be a good partner for a long-term writing career. Because authors highly value the editor herself and their connection, it is not uncommon for an author to choose a publisher that has not offered the highest advance.”

What might stand as the bottom line for the defendants in this antitrust case as it gets going is this, from that pre-trial filing: “Unsurprisingly, after investigating the merger, the government found no evidence that combining Penguin Random House and Simon & Schuster would diminish competition in any consumer market.

“If anything, by making the combined entity a stronger bookselling competitor, the merger will incentivize other publishers to compete even harder for consumer attention. The government will not even attempt to prove otherwise at trial.”

The trial is scheduled to run for three weeks, from today to August 19.

And a note for clarity: In February, ViacomCBS informed its investors that it was changing its name to Paramount Global. At times, you’ll see coverage using one or both names to refer to the parent company of Simon & Schuster.