‘Our workforce must reflect the society we live in,’ reads Penguin Random House’s frank new report on US staff and contributor demographics. 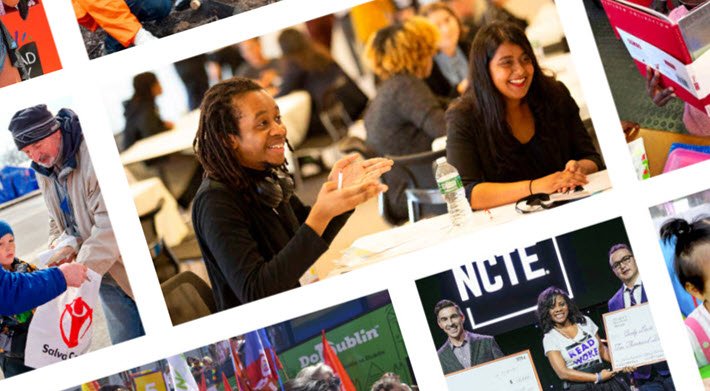 PRH US Reports on its Workforce Demographics

As Penguin Random House has issued its 2021-2022 Global Social Impact Report—a document we’ve covered in previous years here and here—the ongoing US Department of Justice’s antitrust lawsuit trial has formed the backdrop for a meeting in Washington between Rep. Joaquin Castro, Democrat congressman of Texas’ 20th district, and members of the PRH team.

Reported by Erin Somers Tuesday (August 2) in Publishers Lunch, the topic of the meeting was “Latino underrepresentation” in the United States’ publishing market. Somers writes, “Castro told Publishers Lunch that the meeting has been in the works for almost a year. A report he commissioned in 2021 showed that ‘publishing is the worst field in media for Latino employment.’ Nationwide, Latinos make up about 18 percent of the US workforce, but account for just 8 percent of the publishing workforce.”

Somers also quotes Castro honoring Penguin Random House’s transparency in reporting its US workforce diversity, which is at the center of the newly released Global Social Impact Report. 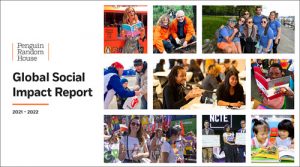 Update on gender demographics, August 3: In terms of gender, for the US context, it may be helpful to know that the American population at large is rated at 50.52 percent female and 49.48 percent male, per Statistics Times’ reportage of United Nations figures from 2019. 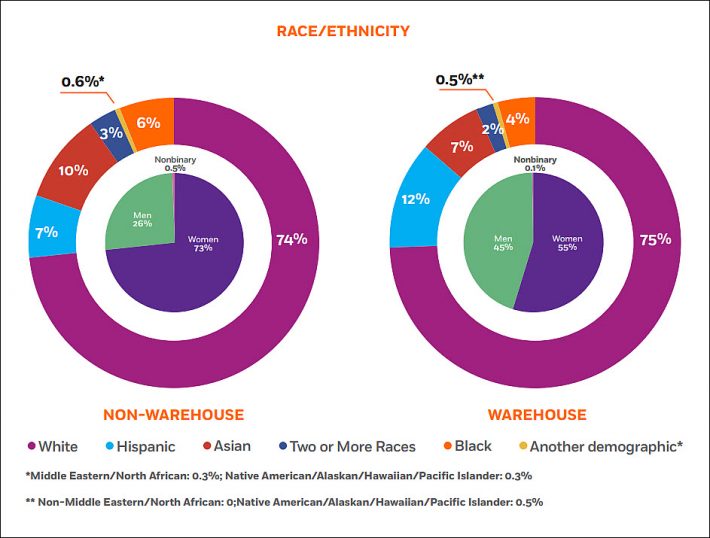 Here at Publishing Perspectives, our readership sees Penguin Random House as the major international publisher, a corporation with operations in at least 20 nations. In the new Global Social Impact Report, much of the corporate-responsibility and climate-crisis response information is based on PRH’s international stance. By contrast, the workforce demographics section we look at today is focused on the United States operations, good to keep in mind.

It’s to Penguin Random House’s credit that it has followed through on its pledge to report such statistics on its US workforce. This and many other features of the United States’ (and the world’s) largest trade book publishing company naturally come into even sharper relief than usual as the Justice Department’s lawsuit trial proceeds, the government’s antitrust challenge to the proposed acquisition of Simon & Schuster by PRH parent Bertelsmann to form an even “bigger biggest” publisher than before.

It’s good to note that this year’s diversity report was released before the start of the trial, and is, as we’ve said, a follow-up to the reportage begun last year. While these are American company demographic figures, the company worldwide now produces more than 16,000 books annually, from more than 300 imprints. Its content includes the work of more than 80 Nobel Prize laureates.

With the graphic we’re showing you above, text indicates PRH’s understanding of one of the most vexing issues in US book publishing: “To create books for everyone,” that statement reads, “the demographics of our workforce must reflect the society we live in, and transparency in pursuit of this goal is crucial.” 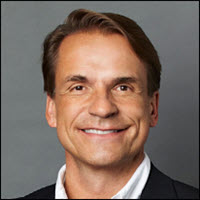 What’s more, in his introductory message, Penguin Random House worldwide CEO Markus Dohle writes, “To actualize a brighter future for all, we must publish books that reflect diverse audiences—and utilize our global platform to drive lasting cultural and environmental changes. From weathering a pandemic with far-reaching social and economic consequences to navigating humanitarian crises and polarized democracies, our world has faced countless challenges over the past few years.”

Publishing Perspectives readers will remember that Dohle has, himself, seeded a “Book Defense Fund” at PEN America in February, opening a channel of response to right-wing book bannings that have become prevalent in the superheated American political climate.

A spirit of egalitarianism and democratic focus is a profoundly important element of the role and mission of book publishing to Dohle in his guidance of PRH, as was evidenced in our Frankfurter Buchmesse-opening one-on-one conversation in October. And while some might look at the workforce figures discussed here today and see less progress than might be desired, Dohle’s commitment to social and industry inclusivity is clearly a driver behind a transparency about PRH’s own US workforce that few other publishers are offering today. 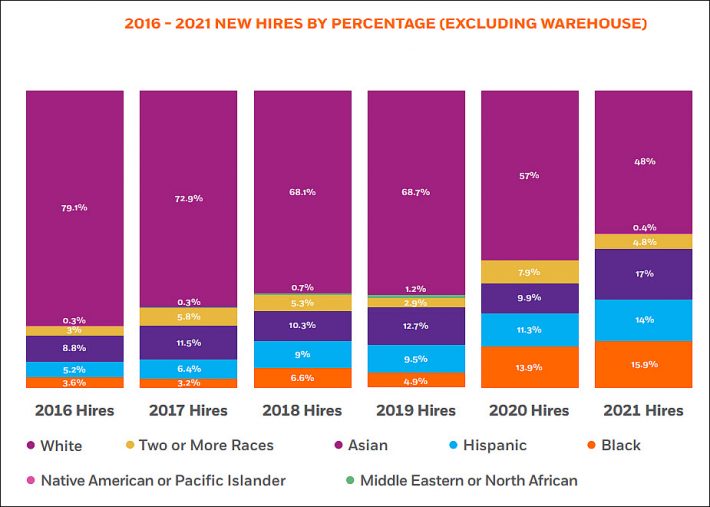 Relative to the above graphic, Penguin Random House’s report clarifies that it’s a look at new hires over the past six years. The company writes, “We have seen an increase in racial diversity within our new hires over the past years, with a more marked increase over the last two years. While we still have significant work to do in this area, we are encouraged by the modest progress our data show. We must continue to make these strides and, in most areas, accelerate this work.” 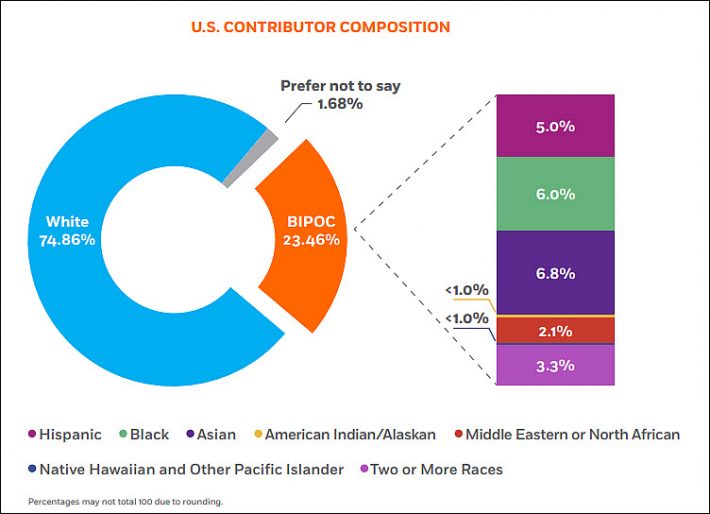 The above graphic, looking at contributor demographics, refers to authors, illustrators, and other creative workers.

In writing about this analysis, the company says, “Here are the demographic findings from the publishing programs audit, which provide a clear, measurable starting point we are using to set goals and standards and hold ourselves accountable as we progress forward. Since the acquisitions take place at the divisional level, the heart of this work lies with our publishers. Each division has committed to deeply exploring their specific systemic barriers.” 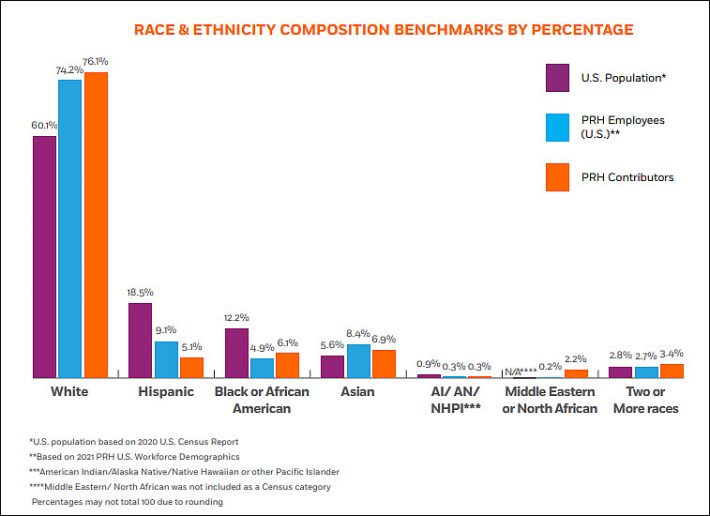 Finally, the above graphic makes the comparison between the racial and ethnic makeup of contributors to the PRH workforce, highly useful in assessing the broader picture across many channels of employment and against components of the American population.

The company writes with admirable frankness, “As you can see, neither our employee benchmarks or contributor base for the audited time frame is reflective of the US population. We understand that these findings are far from where we want—and need—to be. Reaching our ultimate goal of a workforce and contributor population that represents our society will take time, but we are committed to making more meaningful and sustained changes at PRH US that will help us get there.”

Having given the focus here to Penguin Random House’s new report in terms of its workforce (and contributors’) demographics, we’ll return in another story to more of what’s reported in the 2021 Global Social Impact Report. Internal assessments of the company itself are not the same as corporate social responsibility programming, of course, and it can be helpful to parse them separately, especially in the context of such a large corporate entity.

At the very least, it’s clear from the lead PRH is taking on this that the American publishing market—like every national market in the international industry we cover—would benefit deeply from this kind of analysis being shared with the public by publishers of all sizes and classifications.

The full Global Social Impact Report can be found here. Further demographic information on the US workforce is here. And information about the company’s US publishing programs audit is here.

More from Publishing Perspectives on issues of diversity, inclusivity, and equality in world publishing is here. More from us on Penguin Random House is here, and more on corporate social responsibility is here.