Amid news of the NPD-IRI merger, NPD BookScan reports US print holding at 6 percent below 2021’s level in the week ending July 23.

See also: American Publishers’ StatShot: US Industry Down 3.7 Percent in May and our archive of coverage of Industry Statistics

NPD and IRI To Use the ‘Liquid Data’ Platform

The equity firm behind NPD Group has completed a deal to buy a majority stake in Information Resources, or IRI, creating a merged data and analysis company that so far has not announced its joint name.

That NPD backer is the private equity firm Hellman & Friedman, and when Kamaron Leach at Bloomberg reported the agreement in early April, it was understood that the deal was valued at more than US$8 billion, according to a person familiar with the details. It also was revealed in that article that Hellman & Freidman had agreed in 2021 to buy NPD—reportedly the 8th largest research company in the world covering at least 20 industries.

Publishing Perspectives readers are especially familiar with NPD BookScan and the work there of its Kristen McLean, executive director and industry analyst with NPD Books and Entertainment.

Coordinated media messaging from NPD and IRI on Monday (August 1) indicated that the merged entity would have more than 7,000 clients. One thing that comes into the picture for NPD with this merger is IRI’s “Liquid Data” platform for data visualization.

Kirk Perry, president and CEO at IRI, is to head up the combined company, with former NPD CEO Karyn Schoenbart on the new company’s board, and NPD executive chairman Tod Johnson as board chairman.

In a prepared statement, Perry is quoted, saying, “Our combination sets a new standard, raising the bar for innovative technology, rich insights and data-driven advisory services across industries. As one company, our world-class team will offer … a greater share of consumer wallets and stomachs. The possibilities for our clients, our people and our company are endless.”

Johnson says, “Our combined company is best-positioned to support our wide variety of retailer and manufacturer clients around the world with comprehensive and powerful insights to help them navigate the continually evolving consumer landscape. We look forward to realizing the immense value this combination stands to create for our clients, employees and partners.”

Hellman & Freidman is the majority investor. Vestar Capital Partners and New Mountain Capital have been longtime investors in IRI and they’re reported by the two companies to still have “significant investments” in the combined company. 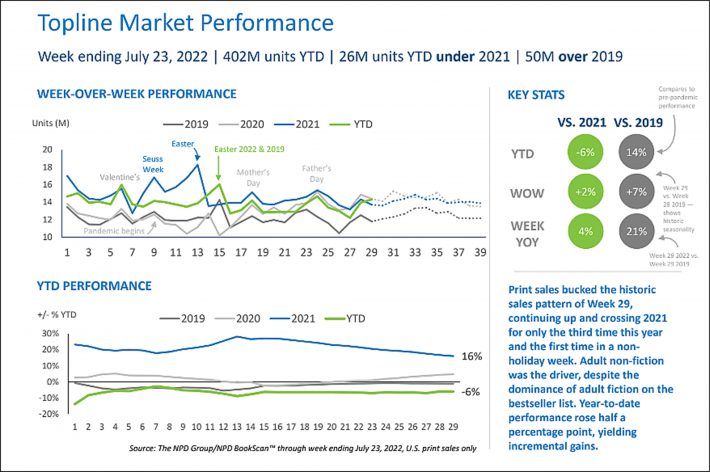 Top-line commentary from McLean for the US print market in the week ending July 23, characterizes it as “a very good week, rising above 2021 for only the third time this year and for the first time in a non-holiday week.

Fiction continues to dominate the top of the bestsellers, McLean reports, with Colleen Hoover holding five out of the Top 10 spots, and that alone has drawn McLean’s attention.

Writing about the rarity of an author holding five of the 10 spots at the same time, she recalls Stieg Larsson’s Millennium Trilogy, as well as Michael Crichton, who was “was pretty dominant in the 1990s, but I can’t think of another time when an author was so dominant at the top. For sure, I can’t remember a time when there were five books from three different publishers driving the story. Pretty remarkable.”