Books ‘unite us and bring us back to a feeling of home,’ Ukraine’s Olena Zelenska tells kids at the British Library. 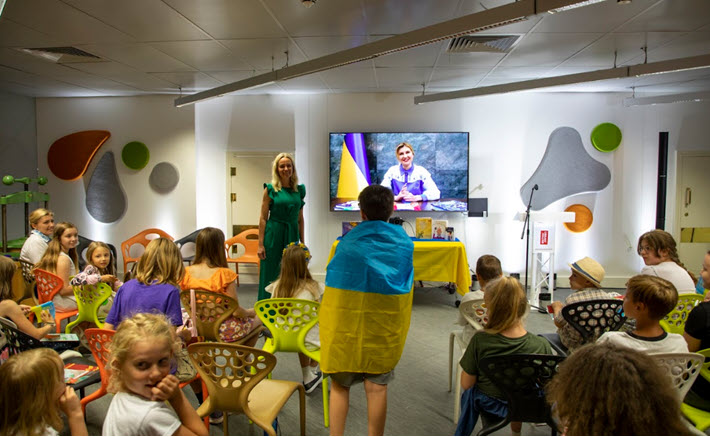 Another effort in getting books to refugee children being displaced in Vladimir Putin’s unprovoked war on Ukraine, the United Kingdom’s Publishers Licensing Services (PLS) collective licensing agency Publishers’ Licensing Services (PLS) and the printing firm Halstan have announced a partnership to pay for and produce 16,000 Ukrainian-language books for young readers in the UK.

And among the many “without borders” operations in the international sphere, one called “Books Without Borders” has been organized by the Ukrainian embassy in London to engage in these efforts, with Ukraine’s first lady, Olena Zelenska, as its patron.

An event was held Thursday (August 11) at the British Library to recognize the effort, in which Ukrainian publishers provided layouts and permission for 16 picture books and novels for ages 3 to 17.

England’s Halstan did the printing in the UK because much of Ukraine’s printing capability has been halted. Zelenska made a digital appearance during that program by remote video, doing a bit of a reading for some of her country’s displaced children in the course of the meeting. 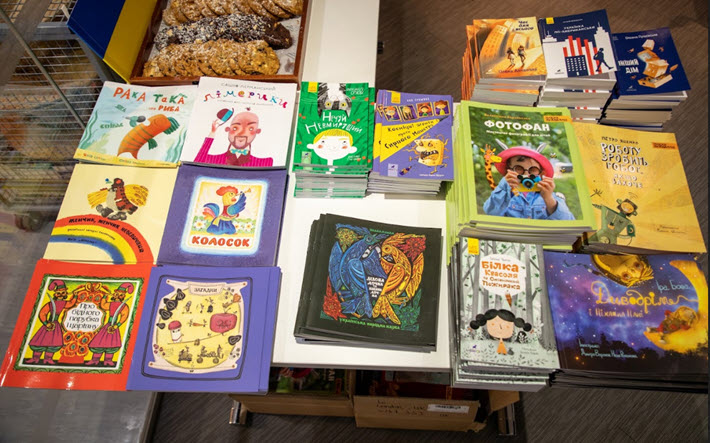 Such efforts as these, as our readers know, have been replicated across many parts of Europe, most recently in our reportage in Germany, Poland, and Italy.

The Bookmark Reading Charity also kindly agreed to donate an additional 1,000 books from their own “Bookbox” campaign to the project.

Further support, according to media messaging, came from the Publishers Association as well as the department of education, which liaised with local authorities across the UK and the Association for Ukrainians in Great Britain to ascertain where the books will be delivered for onward distribution.

Zelenska: ‘Our Victory on the Cultural Front’

In her comments on the program’s work, Zelenska said, “Books not only entertain and educate us. They also unite us and bring us back to a feeling of home. This project is our victory on the cultural front, and it brings our primary victory closer.

‘We can bring the homeland to Ukrainian children in the form of books. We called this project ‘Books Without Borders’ as Ukrainian books can travel with Ukrainians to any country where they’re needed. The embassy of Ukraine to the UK, together with Halstan, Publishers’ Licensing Service, and other benefactors, have printed 16,000 books.

“I’m grateful to everyone who has contributed to this project. Displaced Ukrainian children will now be able to enjoy a mini-library at home.”

It’s gratifying, of course, to report on this and many projects for displaced Ukrainian children, and gratifying to see such developments on their behalf.

Perhaps soon we’ll see more of these fine refugee book projects that take into account the needs not only of children but also of the adults–many of whom could use some help in trying to be brave, stable, optimistic, and strong for those beautiful kids.

At the same time, there’s a hope quietly being discussed among some professionals in the world publishing industry that adult refugees from the Ukrainian crisis can also be supported by gifts of literature.

While these many books-for-children refugee programs are undeniably important, the adult refugees of Ukraine and so many other countries can also find in books some of the comfort and connection to the homes and lifestyles they’ve lost, just as children do. Even a touch with an intellectual life that’s been overturned in such a crisis can help remind a suddenly homeless soul that stability and coherence really were in place once, and can be regained.

The traditions of storytelling and literary insight from one’s own culture can help sustain fathers, mothers, grandparents, young adults, and those who are completely alone in their exhaustion, bewilderment, and fear. And perhaps soon we’ll see more of these fine refugee book projects take into account the needs not only of children but also of the adults–many of whom could use some help in trying to be brave, stable, optimistic, and strong for those beautiful kids. 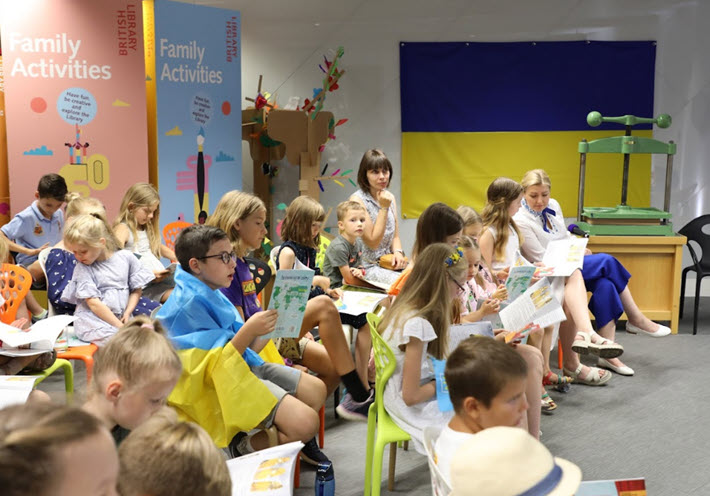 An event, August 11, at the British Library in London, as part of a donation of a reported 16,000 books for Ukrainian refugee children in the United Kingdom. Image: Publishing Licenses Services