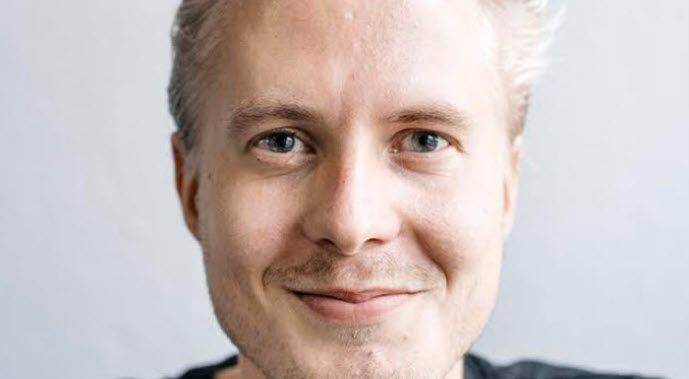 Helsinki’s Kalle Siltala’s family founded one of the two publishing houses at which he works. He’s one of this year’s Frankfurt Fellows. 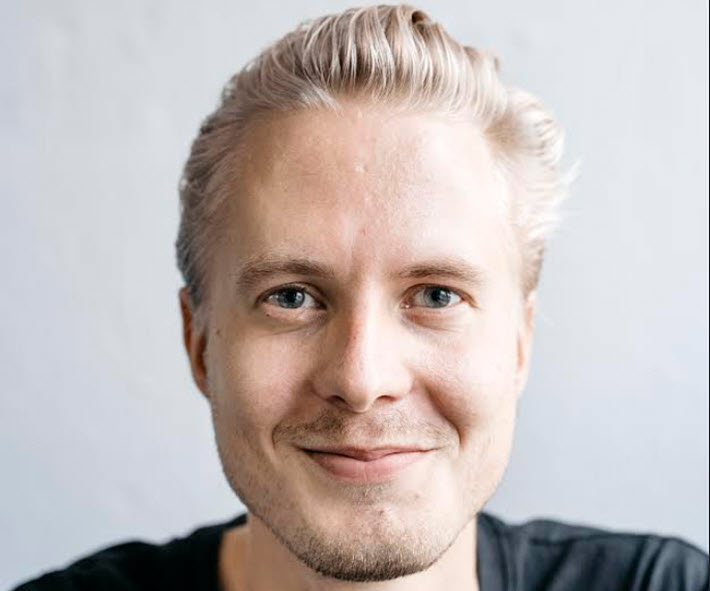 And at the house that bears his name, Siltala Publishing, he’s the head of digital publishing.

In our exchange, Siltala explains the complementary character of the two houses in his own work, and he also deftly puts into words a somewhat more nuanced view of the rise of the audiobook format than you get from many enthusiasts.

“Siltala Publishing was founded in 2008,” he says, “by my father Touko and my uncle Aleksi after they left WSOY—then one of the biggest publishing houses in Finland. Later, WSOY became part of the Bonnier group.”

Siltala describes his family publishing house as “a middle-sized indie publishing house that produces around 50 titles per year and currently employs nine people. Our business focuses on literary fiction and narrative nonfiction, biographies, and history. Since the founding of Siltala Publishing, we’ve also had an ambitious program of literary translations.

“At this point, we’ve translated and published books from more than 20 languages, from all around the world. The list includes classics too, but especially contemporary up-market literary fiction and narrative nonfiction.”

As it turns out, Siltala’s work also has ties to an agency in Helsinki known well by Publishing Perspectives readers. As you’ll remember, Helsinki Literary Agency was founded in 2017 by four Finnish publishing houses. Siltala is one of those four, its three partners in the venture are Teos, Gummerus and Schilts & Söderströms. 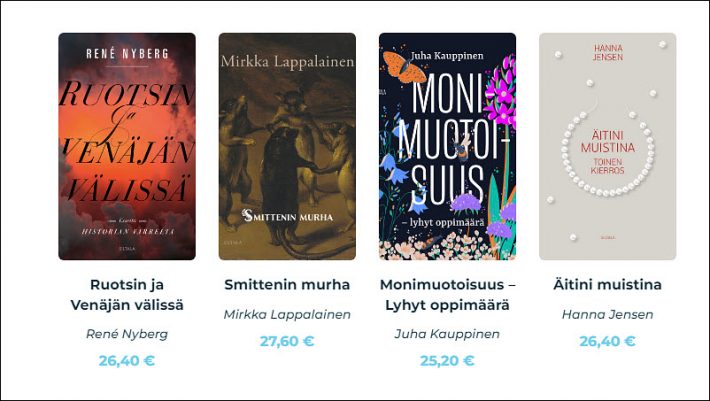 “At the core, we’re a small independent nonprofit publishing house with a business focus on recent and contemporary philosophy and political theory,” he says. “We publish six to eight titles per year. That’s not a lot, but it gives us a chance to treat every title with devotion and care. Besides prominent Finnish authors, our list includes writers from Martin Heidegger, Edmund Husserl, and Sigmund Freud to Angela Davis, Achille Mbembe, and Paul B. Preciado.”

Our observation that the way Tutkijaliitto works sounds a bit like something akin to a think tank, prompts Siltala to say, that despite some of the traditional publishing elements of the company, “It’s true that our practice might differ a little from the usual publishing business and resemble something that you called a think tank.

“Originally Tutkijaliitto was founded in the early 1970s by a group of Marxist scholars who wanted to establish a ‘platform’ outside of academia for critical research and ambitious conceptual work. To establish this, they set up an association of researchers and started to publish an academic journal of their own, Tiede & Edistys. This high-quality peer-reviewed journal with a focus on philosophy and social sciences is still an integral part of our catalogue, and four issues are published each year.

“What’s more, the concept of a platform for ambitious critical theoretical work is still something that characterizes our efforts well. That’s to say that besides book publishing, we also organize numerous interdisciplinary events, seminars, and discussions concerned with critical conceptual thinking, as well as an annual three-day summer school with a changing theme. Aptly, this year’s summer school is devoted to discussions, presentations, and artistic interventions concerning critical publishing practices.” 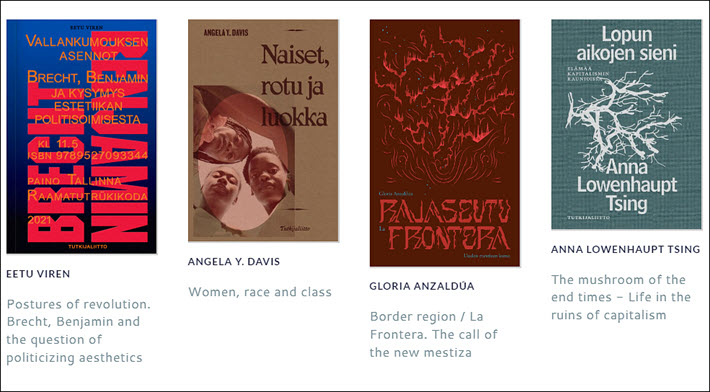 Finnish and Nordic Publishing, and Audio

When it comes to Finnish publishing in particular and, at the higher level, Nordic publishing overall, Siltala has a an unusual dual-perch from which to track trends both in commercial and more academic publishing. “A versatile view” of the industry, he calls this.

“In the long run, one could argue, audio might have an impact on the artistic qualities of published literature.”Kalle Siltala

Siltala cautions, there could be deleterious effects ahead, as audio makes more inroads.

“Although the growing turnover is of course greeted with warmth,” he says, “this development is something to keep an eye on since it affects not only publishers and booksellers, but it also has a direct impact on authors and their livelihood. Since we’re already seeing a lot of audio-driven corporate fusion in the business, it’s hard not to think that the growing consumption of audiobooks will affect future publishing strategies.

“In the long run, one could argue, this might have an impact on the artistic qualities of published literature. As I write this, there’s an editorial in the biggest Finnish newspaper, Helsingin Sanomat [called Hesari] in it’s predicted that the next step in the industry will be Spotify buying publishing houses after launching their own audiobook service not long ago.”

‘The Hegemony of English in Academia’

And in looking at more scholarly publishing, Siltala says, “One could argue that a major challenge we face right now in Finland, is the hegemony of the English language in academia and scholarly writing. It seems clear that universities do not want to encourage research and publishing in languages other than English, and this creates real problems, especially in the field of political theory and philosophy.

“One could argue that we’re already lacking a lot of crucial concepts to talk about many present-day societal issues in our mother tongue.”Kalle Siltala

“As a result, there’s a growing lack of original and ambitious theoretical literature written in Finnish. This is a challenge not only for scholarly publishers but also in general for critical thinking and writing in Finland. One could argue that we’re already lacking a lot of crucial concepts to talk about many present-day societal issues in our mother tongue.

“This makes it all the more important for publishers to have serious ambitions in translated literature.”

One thing Siltala points to is a sense for advantages found in the book business in the Nordic markets, including Finland’s.

“As I understand it,” he says, “in Germany, for example, digital publishing is still a rather modest part of the industry and there are some doubts about the audiobook business especially. At the same time, in the Nordics, the growing audiobook business is boosting the entire industry and reimbursing long-declining print book sales. But as I’ve said, the matter might of course be more complex than the impressive bar charts on digital publishing might suggest.”

And while in Germany and at Frankfurt for Buchmesse and for the market-introduction he and his colleagues in the fellowship program will have, he says, he’ll be looking for French literature in particular.

“Also,” Kalle Siltala says, “I’d really like to learn more about contemporary African literature, about which I know very little.” 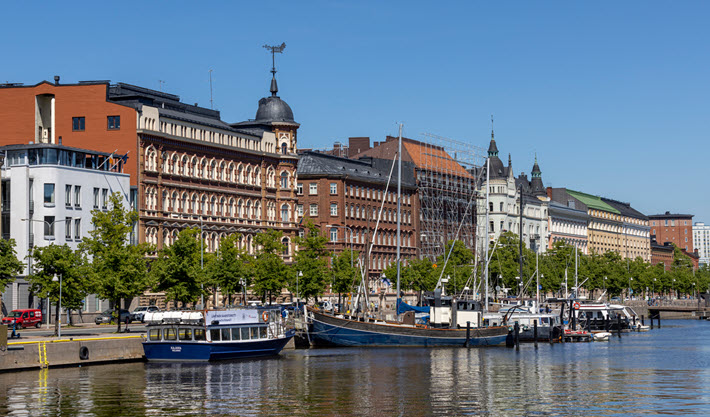 This year at Frankfurter Buchmesse, join us for special programming with influential professionals in the international publishing industry in our new Publishing Perspectives Forum. More information, updating as we announce new features, is here.