The ancient Hindi scripture about dharma, yogic ideals, and philosophy is reinterpreted for kids by Roopa Kai.

An illustration accompanying press announcements of the UK edition of ‘The Gita for Children,’ no illustrator credit provided

Lessons From an Ancient Conversation

Being publicized as “an accessible friend and guide designed to reassure, empower, and provide direction  to young readers in an increasingly chaotic and  morally topsy-turvy world,” The Gita for Children is listed by the United Kingdom’s Swift Press for an October 13 release. 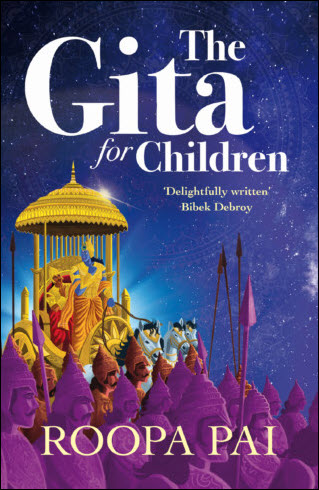 It’s the work of Roopa Pai, “a computer engineer who always knew she was going to write for children,” according to the publisher.

What she does for the 700-verse Hindi “Song by God” from the first millennium is captured in the table of contents, in which sections are called, “In Which Arjuna Learns that Exercise Is a Valid Form of Worship” and “In Which Krishna Explains the Importance of Me-Time.”

Pai is the author of several earlier books including Taranauts, described as “India’s first fantasy adventure series for children,” and The Vedas and Upanishads for Children.

Despite its workover as a children’s edition, this coming release is said to be the first adaptation of the Bhagavad Vita in the UK.

“The Gita for Children,” according to promotional material in media messaging, “is especially aimed at young people of the 21st century (and their parents).”

The of the Baghavad Gita, of course, is in a battlefield, which certainly may have some resonance for today’s conflict-exhausted readers. 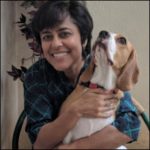 “The book not only stays faithful to the Gita story,” the descriptive copy goes on, “but also brings in everyday examples that illustrate how the Gita’s luminous wisdoms may be applied to our daily lives (‘Lessons from the Gita’), and connects those wisdoms to similar ones from other countries and cultures (‘Echoes of the Gita’), universalizing the ancient text and making it relevant to anyone.”

Getting to something with a bit more substance about the book, the media messaging reads, “The book is particularly relevant to a British audience since the Indian diaspora is the largest [UK] ethnic group after the white population, totaling 1.4 million people or 2.5 percent of the overall British population.

“In addition, Hindus are the third largest [UK] religious group.”

If the title is ringing a bell for children’s books specialists, it may be because The Gita for Children was published in 2019 by Hachette India Children’s Books, having been written in 2016.  Illustrations in that edition are credited to Sayan Mukherjee. No illustration credit for the upcoming UK edition has been offered, as yet, to the press.

More from Publishing Perspectives on children’s books is here, more from us on the United Kingdom’s market is here, and more on the Indian market is here.