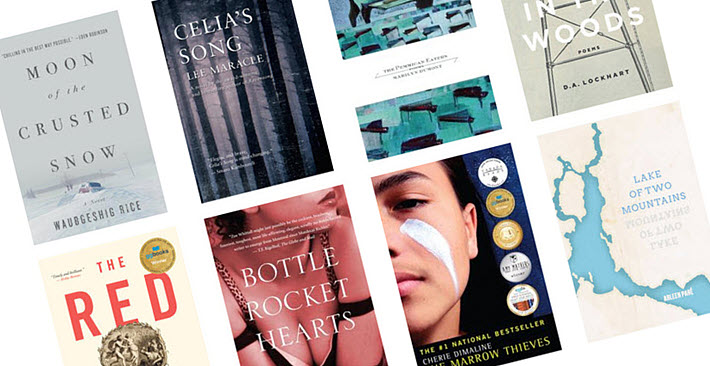 Close to 600 titles will be part of the new, accessible ‘Ebooks for Everyone’ initiative from the Literary Press Group of Canada. 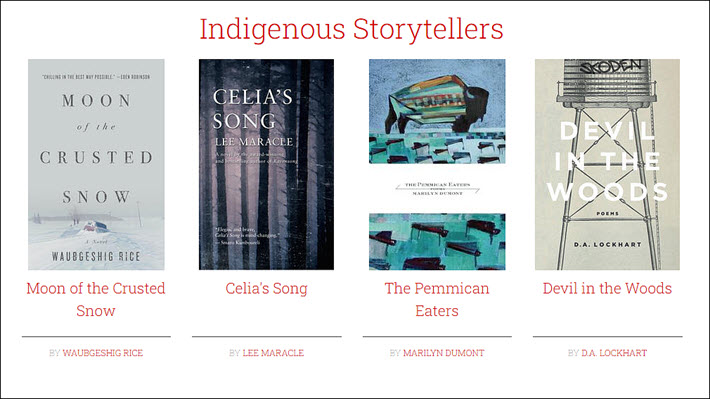 For Readers With Print Disabilities

Last week, we had news from the United Arab Emirates on the Kalimat Foundation‘s license to implement accessible publishing under the copyright exception created by the World Intellectual Property Organization (WIPO) Marrakesh Treaty.

Today (August 9), the nonprofit Literary Press Group of Canada in Toronto tells us that on August 16 it will open a collection of newly accessible ebooks from 23 Canadian literary publishers.

The focus of the accessibility here is in “assistive reading technologies” including scalable text, alternative text for images, and a navigable table of contents. The new collection, called Ebooks for Everyone—the site you see here is in beta at the moment—will comprise nearly 600 titles including novels, short stories, creative nonfiction, poetry, drama, graphic narratives, and children’s books.

The program reports that fewer than 5 percent of titles in Canada each year are accessibly published for people with print disabilities. Such numbers are behind the backing that the Literary Press Group has been able to attract to the project, with funding from the Canadian government through the Canada Book Fund’s Accessible Digital Books initiative. That initiative, from Canadian Heritage, as the country’s cultural ministerial-level operations are termed, supports collective projects such as Ebooks for Everyone with four objectives:

Specifically, the government’s program is trying to increase the availability of “born accessible” Canadian-authored digital titles. As you’ll recall, in the world book industry’s growing emphasis on accessibility, books called “born accessible” are developed to make it possible for readers of any ability to have equal access to information.

The Literary Press Group is a good fit for Canada’s Accessible Digital Books initiative as a collective that represents 63 Canadian-owned and -operated literary book publishers. It reflects the work of “diverse voices that have not been well represented in mainstream publishing,” and with its new effort in accessibility might be said to also be reflecting a sector of the readership also sometimes not well represented in mainstream publishing–those who are blind or otherwise sight-challenged.

Accessibility Details for Each Book in the Collection 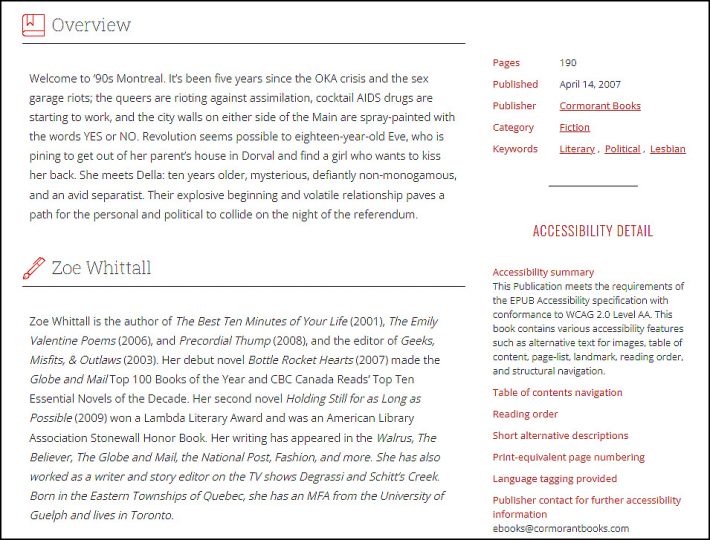 As an example of how books will be presented on the Ebooks for Everyone site, here’s the listing for Bottle Rocket Hearts by Zoe Whittall (Cormorant Books, 2007), and in a rundown of its “accessibility details” (above) it lists a number of points, including print-equivalent page numbering, short alternative descriptions, and a reading order.

The group maintains its own retail site for its member-publishers’ work, All Lit Up, and the new Ebooks for Everyone collection will be found there. The entire cohort of almost 600 titles aren’t expected to be in place right away: the participating publishers will be adding new reads to the collection over the course of several months.

In a prepared statement, the executive director of the Literary Press Group, Laura Rock Gaughan, is quoted, saying, “New readers will discover vital Canadian books that were not previously available in accessible ebook formats, and our All Lit Up site will display a level of accessibility detail that goes beyond what is currently available in the market.”

Some of the books expected to be included in the collection when it releases next week are: