The ‘African Book Box’ program from Book Aid International is delivering books to 76 schools in Uganda, Ghana, and Zimbabwe. 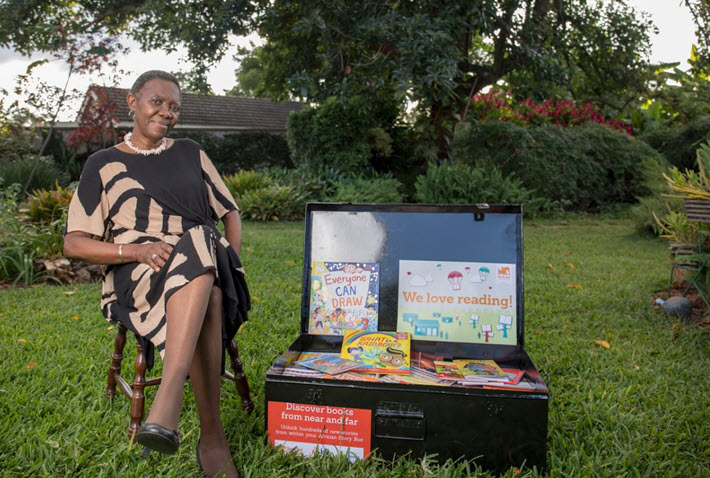 Virginia Phiri, chair of the Zimbabwe section of the International Board on Books for Young People (IBBY) at her home in Harare with the African Book Box. Image: Book Aid International, Cynthia R. Matonhodze

In June, as you’ll recall, we reported that one of the International Publishers Association‘s (IPA) Africa Publishing Innovation Fund recipients for this year was Book Aid International. This year’s honor is the second grant that the United Kingdom-based international charity has received from the fund, the first, in 2021, recognizing the organization’s shipping-container library facilities deployed in Tanzania.

This time, a Book Aid program called “African Story Box” is the specified program, designed to bring books to children and encourage reading for pleasure. The money from the Africa Publishing Innovation Fund targets 24 primary schools in Uganda and Zimbabwe.

The offices of Book Aid in England tell us today (August 9) that the boxes are reaching their destinations, and—notably—they include not only books donated by publishers in the United Kingdom but also locally published books, thanks to the funding provided by the Africa Publishing Innovation Fund and the UK’s People’s Postcode Lottery.

Each box contains 200 books as well as a manual for teachers to use in guiding students through their new collection of readings. Half of the books those donations by British publishers, and the other half are the locally published title, important because many African markets’ local publishers need the support of a program like this, of course.

The program opened in March in Zimbabwe, with Book Aid and the Zimbabwean chapter of the International Board of Books for Young People (IBBY), led there by Virginia Phiri. In a prepared statement, Phiri is quoted, calling the African Story Box project is “a brilliant idea.

“Schools here usually have no libraries and parents are struggling with the cost of living and school fees. They can’t afford to buy books.

“I know that books are important. There were no children’s books in the black township where I grew up during the apartheid era, but I borrowed books from my uncle. If I had never had access to those books, I wouldn’t have become a successful accountant, author, environmentalist, and human rights defender.

“Certainly, books give people the power to change their lives—and this project will help children be well prepared for life as adults.” 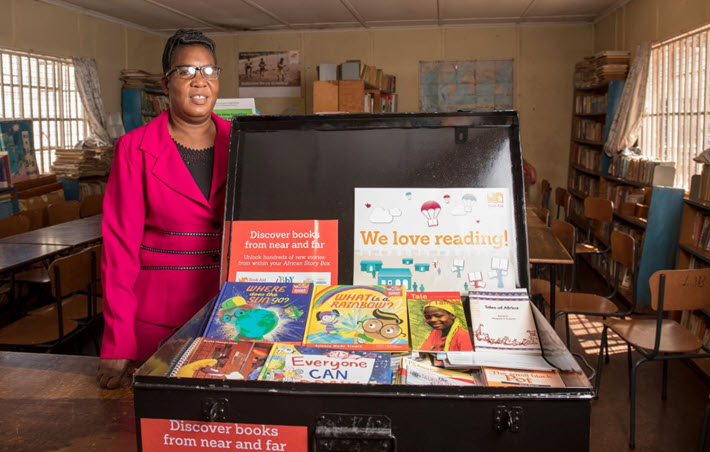 Also in Harare, Getrude Katena, headmistress of the Selbourne Routledge School, says that an important feature of the book boxes is that they’re intentionally filled with storybooks, not textbooks.

“With textbooks,” she says, “you’re almost forcing the child to read because she has to do something at the end–probably a comprehension exercise.” By contrast, she says, a child reads a storybook to find out what happens next.

“Children will realize it’s not just about reading for comprehension and that there’s more to learn from books,” she says.

The program, Book Aid says, is being expanded now to go into Ghana as well as Uganda and Zimbabwe. The 56,000 students expected to come into contact with the book boxes are in 76 schools. 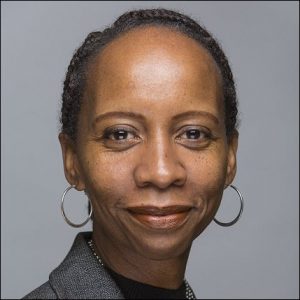 Samantha Thomas Chuula, head of programs for Book Aid, says, “It’s so important that all children have the chance to develop a love of reading early, so we want children to have access to stories from near and far that ignite their excitement about reading.

“We’ve always funded the purchase of locally published books for exactly that reason, but this is the first time we’ve worked with our partners to carefully curate storybook collections for schools designed to encourage reading for pleasure. We’d like to thank our partners for their input and their creative energy.”

More about the African Book Box program is here. 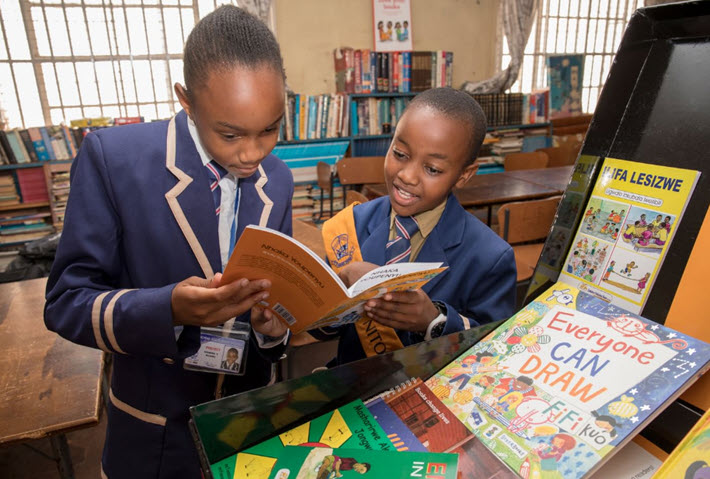