The redesigned ‘Words Without Borders’ site, its editors say, is a chance ‘to demonstrate how everything intersects.’

Image: From the ‘Words Without Borders’ column called ‘Watchlist’ for July

See also: Words Without Borders Updates Its Look and Mission: ‘A Guided Journey’

‘To Consider Things From a Reader’s Perspective’

When Words Without Borders was founded in 2003, it was well ahead of its time, and not just because its focus was literature in translation.

The magazine was digital-only, and its founders—Alane Salierno Mason, Samantha Schnee, and Dedi Felman—worked remotely. When they were interviewed by Julie Solomon for The New York Times in 2004, they met in a café.

As other media outlets went on to get rid of their paper versions and went digital, Words Without Borders forged ahead, looking for funding to provide English readers with translated literature from many parts of the world. It remained avant-garde in its content—with yearly themed queer editions, for example, featuring fiction by international authors. The site wouldn’t reveal a redesign, however, until a month ago, one year short of its 20th anniversary.

Editorial director Susan Harris, who also joined Words Without Borders in 2003, says, “With digital sites, it’s so involved to do a redesign. The goalposts keep moving, and we were so small and nonprofit and limited in what we could do. But we got to a point where we needed a site that was at the level of the literature that we were publishing.”

Digital director and senior editor Eric MB Becker says the redesign had been “something we’ve been eyeing since I joined Words Without Borders in 2015, and planning more seriously for since about 2019.”

The COVID-19 pandemic had very little effect on the process, Harris says, even if it might have “put a stick in the spokes for fundraising, as it did for every arts organization. So the process may have been delayed from our original timetable.”

‘Translation Has Moved Out of the Academy’

At the heart of the redesigned site were changes being made to Words Without Borders’ publishing model, Becker says, and “the evolution of our thinking about how to best bring together writing from disparate countries, languages, and literary currents.”

“We’re seeing readers more interested in global literature and moving away from Eurocentrism and going to the rest of the world.”Susan Harris

The site, which is still in its beta version, has moved away from a monthly themed issue and now publishes more frequently. It’s also an opportunity to make the vast writings from its archive available in a simple search by country or theme.

Harris says, “Every publication presents works in conversation with each other. It’s wonderful to have this possibility. We could see the connections, but you couldn’t make the less obvious connections, and this allows us to demonstrate how everything intersects.”

In going back through their archive, Harris says, it was “fascinating to see that what we published has such import now. The notion of the context, providing a sense of the history, and how those parts of the world have been interpreted. There has been a generational shift not only with our writers but with our translators. Translation has moved out of the academy.” 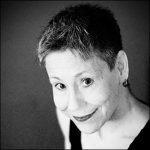 Putting translators into the spotlight alongside the authors has always been important to Words Without Borders, and on the new site, translators and authors are given equal billing.

“We’ve always thought of writers and translators as contributors,” Harris says, adding that access to certain literature has grown, thanks to an increase in the number of translators at work. 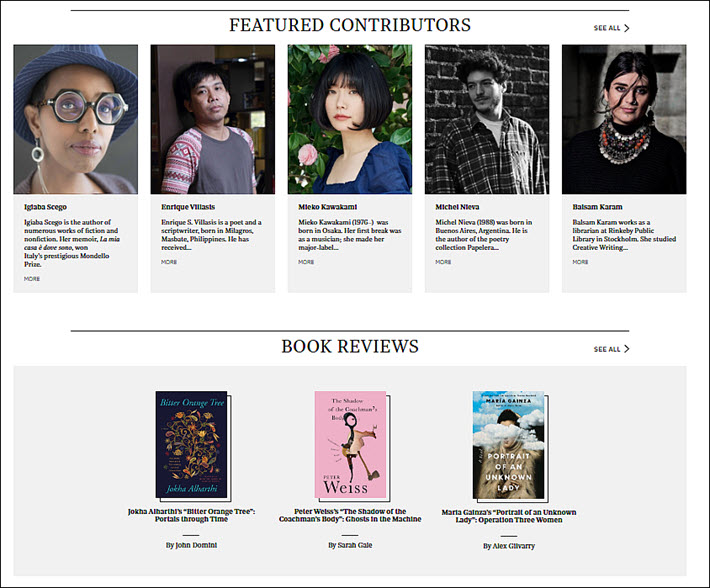 Becker says that because they’ve moved from a monthly approach and are “publishing one-offs, we’re able to move beyond a certain way of reading. The younger generation of translators goes for a more porous border. They read differently too.”

“We’re presenting the literature better and users can find and realize the depth of the archive. This new site allows us to experiment and that’s one of the greater gains.”Eric MB Becker

There will still be collections of related work, along with the site’s signature mix of literature, book reviews, interviews, and essays, but the accelerated publishing frequency affords the team more flexibility, Harris says, and “allows us to see single pieces that don’t always fit predetermined content. We can be responsive as appropriate. We commissioned Ukrainian content when Russia invaded Ukraine. We couldn’t have planned this in advance.”

Although publishing more content sounded overwhelming, Harris says, in reality the amount of content has not changed appreciably, with approximately 21 stories a month.

The 12,000 stories in the archive haven’t yet been fully migrated to the redesign, and Becker hesitates to put a date on when the work will be finished. As far as glitches go, he says it’s too early for the team to make a full analysis. 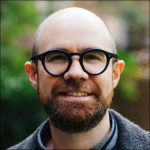 The most challenging aspect of the redesign, Becker says, “might have been the process of stepping back from our own assumptions about what the site should do to consider things from a reader’s perspective. It really involved testing our assumptions about the best way to serve our very diverse readership, which encompasses groups from your average person who’s passionate about literature to those in the book industry; from those interested in foreign travel to those teaching international writing in the classroom; from those based in the US to those based abroad.

“Our international readership, in particular,” he says, “has been growing at a breakneck pace in the last few years, especially beyond the traditional ‘centers’ of the English language—the United Kingdom, Canada, and the United States.”

In the end, Becker says, “The hope is that we continue to iterate and that we don’t find ourselves where we feel the site has aged. We’re presenting the literature better and users can find and realize the depth of the archive. This new site allows us to experiment, and that’s one of the greater gains.”

More from Publishing Perspectives on ‘Words Without Borders’ is here, more from us on translation is here, and more on digital publishing is here.