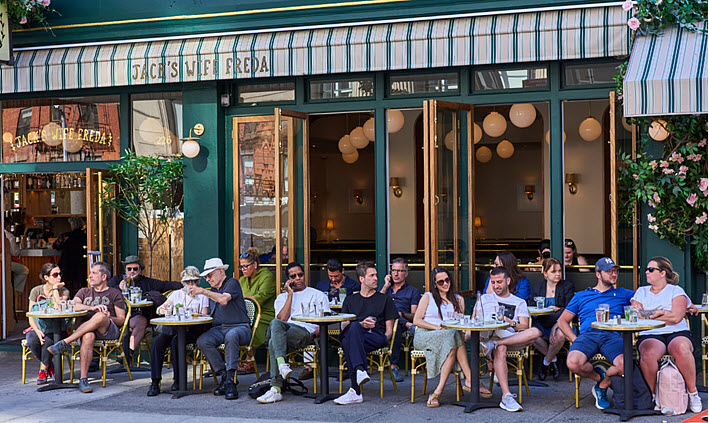 For many in international publishing, a distinct—and at times baffling—slowdown in frontlist sales has been an issue. Without a border-crossing blockbuster for some time—and amid an apparent upturn in consumers’ interest in backlist—the frontlist for many publishers seems not to be moving as briskly as it once did.

When Publishing Perspectives recently asked an audience of students in New York University’s Summer Publishing Institute if they had found themselves consciously selecting backlist titles for their own reading since the advent of the coronavirus COVID-19 pandemic, something close to a third of the house said they had. While it’s not clear exactly what’s driving such a trend, industry experts on the panel spoke of being acutely aware of this tendency among consumers.

Although Open Road, of course, is seated in New York City, the service is fully open to international publishers, with the one caveat that most of its consumer base—reportedly now comprising some 3 million users—reads in English. Mary McAveney, the company’s chief revenue and marketing officer, tells us that many UK publishers already use the company’s more familiar “Ignition” program regularly.

And “Activation” is built on “Ignition.”

The Ignition approach, as you’ll recall, is a suite of D2C (direct to consumer) email newsletters that target genre-based consumer groups. Those newsletters include (linking to their associated sites): 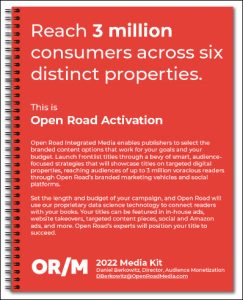 The Activation offering allows publishers to choose D2C components from both the existing newsletters as well as their associated sites.

“In the full-service Ignition program,” McAveney says, “we take on the book itself and put it in front of the right audience.” By contrast, this is a way for a publisher to pick and choose among the newsletters and among the various marketing devices of components that each newsletter offers.

There are ad opportunities, too, including email display ads; deal promotions; site ads; site takeovers; and monthly bundled giveaways. The digital ads program can be expanded beyond the newsletters and sites to include various social media, as well as Amazon and other channels.

In a prepared comment for today’s announcement, Open Road’s chair and CEO David Steinberger says, “Publishing leaders keep asking me whether they can directly reach our audience of readers to create awareness and  demand for their lead frontlist titles. This new service makes that possible.” 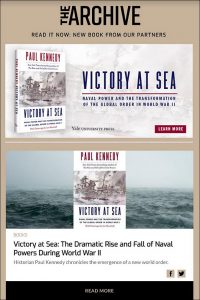 A recent frontlist title (published April 26) from Yale University Press, Paul Kennedy’s Victory at Sea: Naval Power and the Transformation of the Global Order in World War II, was marketed through The Archive newsletter.

McAveney stresses that social media advertising costs have risen so rapidly that publishers are looking for ways to reach defined groups of consumers. Publishers interested in using the Activation approach don’t have to be signed up for Ignition, although those who are using Ignition will be able to use Activation, as well, for their frontlist titles.

The implication in today’s announcement is that the Activation mix-and-match approach is a formalization of usage that some of the largest New York-based publishers including Penguin Random House’s Doubleday and Knopf, Simon & Schuster, Macmillan, Sourcebooks, and WW Norton have been making of the original Ignition approach. 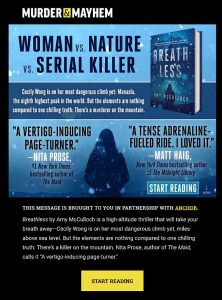 As another example of frontlist marketing, Open Road is referring to its display for Knopf/Doubleday’s Anchor Books of Amy McCulloch’s Breathless (published May 3).

As Publishing Perspectives readers know, Open Road Integrated Media is still under relatively new management, Steinberger having led an investment group to acquire the company in December for a price reported to have been between US60 million and $80 million. Grove Atlantic’s Morgan Entrekin is among those investors, and as far back as 2018, he’d been highly complimentary of the back-list push that Open Road’s core Ignition program could produce.

In January, Steinberger said that Open Road’s “data science” on its consumer base had helped drive an increase in backlist titles on the platform of more than 20 percent, reaching 35,000. The company said that in December (2021), it ran “data-driven marketing campaigns for more than 50,000 titles.”

At that point, the company reported that its newsletters were reaching 1.9 subscribers, a jump of 25 percent over 2021. More than 100,000 customer reviews were added in 2021, the company said in January, with the annual rate of revenue increase running at more than 20 percent for the past three year.

Open Road was founded by former HarperCollins CEO Jane Friedman with Jeffrey Sharp in 2009. In that original incarnation, it amassed an enviable vault of great backlisted books—from some of the most revered writers and estates in the world—with the rights to produce them as ebooks. Friedman was a pioneer in seeing the formidable potential in publishers’ and authors’ digitally produced backlists.

Paul Slavin became CEO in 2016 and held the role until the acquisition last year by Steinberger and his colleagues.