One of WEXFO’s most compelling presentations in Lillehammer came from a Ukrainian human-rights attorney, Oleksandra Matviichuk. 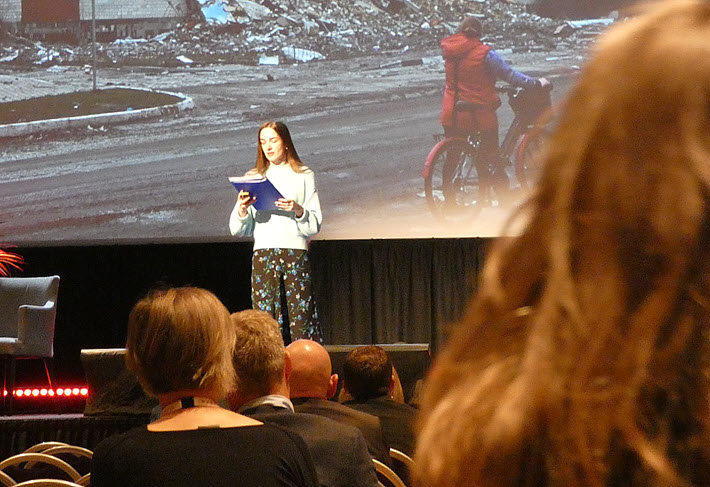 ‘Freedom of Expression Is Essential’

As timely as many events seemed in Kristenn Einarsson‘s inaugural World Expression Forum (WEXFO) in Lillehammer, the forlorn eloquence of the Kyiv-based human-rights attorney Oleksandra Vyacheslavivna Matviichuk has come into even greater relief with the publication Wednesday (June 1) of Andrew Exum’s Atlantic essay, Western Support for Ukraine Has Peaked.

Exum was the United States’ deputy assistant secretary of defense for Middle East policy between 2015 and 2017. At The Atlantic, he writes what seems inevitable: “We’ve likely reached the high-water mark of the grand alliance to defeat Russia in Ukraine. In the coming months, relations between the Ukrainian leadership and its external supporters will grow strained, and the culprit will be economic pain exacerbated by the war.”

Matviichuk, who leads the nonprofit Center for Civil Liberties, appeared two days prior to the publication of Exum’s prediction of the world’s fatigue with the ongoing Ukraine ordeal. She was one of the first of the speakers in the opening sequence at WEXFO and stood initially alone onstage, tentative yet determined, dwarfed by looming projected images of Russian war damage in Ukraine.

In what would be the first of several “spotlight” segments in the two-day event in Norway, Matviichuk read carefully from her notes, working to put across in English the profound urgency that motivated her comments. Despite the stark gravity of an earlier recorded message from the Russian Nobel Peace Prize-winning journalist Dmitrij Muratov, it was Matviichuk’s painstaking, deeply felt delivery of her message that would be talked about by many at the conference long after she spoke.

We’re excerpting here some of her comments.

‘Putin Is Afraid of the Idea of Freedom’ 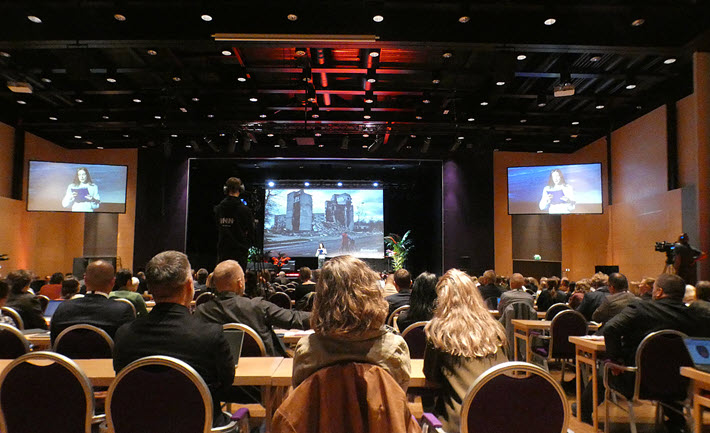 Ukraine’s Oleksandra Matviichuk, who spoke at WEXFO in Lillehammer on May 30, heads the nonprofit Center for Civil Liberties in Kyiv. Image: Publshing Perspectives, Porter Anderson

“Freedom of expression is essential,” she said, with a first-hand understanding of this that clearly surpassed what many of those present have experienced.

In making her way to Lillehammer, Matviichuk said, she had left Ukraine for the first time since the February 24 onset of Vladimir Putin’s entirely unprovoked assault on Ukraine. Matviichuk said that she had spent more than a month of the attacks in cities “unceasingly fired upon by the Russian troops.

“Vladimir Putin is not afraid of NATO. Putin is afraid of the idea of freedom.”Oleksandra Matviichuk

“Hundreds of thousands of people are escaping from shellings in the bomb shelters–having no food, no water, no electricity, and no medical care,” she told her rapt audience. “Russia uses war crimes and the madness of warfare. No military necessity can justify such actions. There is no need to destroy residential buildings, churches, schools, or theaters. There is no necessity to fire upon evacuation corridors, or forcibly deport more than 1 million people. There is no necessity to terrorize people in the occupied territories; to shoot people along the street; to break into houses and rape women and children; to abduct and torture civilians. Russia is attempting to break the resistance of the country by means of what they call the ‘immense pain of civilian populations.’ The Russians have only done these things because they could.

“Vladimir Putin is not afraid of NATO. Putin is afraid of the idea of freedom. Nine years ago, during the Revolution of Dignity, we fought for our freedom, for the right to live and build a country where everyone’s rights are protected. Where the government is accountable. Where the judiciary is independent. Where police do not attack and kill independent journalists.”

Matviichuk said that not least because a fight once fought is having to be fought again now in Ukraine, “This fight is significant for the entirety of Europe.

“If you do not stop Putin in Ukraine, he will go on.”

She laid out for the WEXFO delegates a series of three challenges, amounting to what might have been adopted as a list of goals by an assembly like the one seated in Lillehammer. In her formulation, these three points involve a trio of expressive dynamics and must be protected and promoted to defeat authoritarianism. They involve the right of the people to speak, the responsibility of the state not to control information, and the importance of those who gather and produce the information needed by a free culture.

To her credit, Matviichuk said that Ukrainians cannot afford to defeat the Russian assault and then devolve, themselves, into the kind of vindictive and punitive state operated by Vladimir Putin.

“The internal challenge,” as she calls it, is one that Ukraine will carry forward, she said, and must handle in a way that distinguishes that democracy from the totalitarian darkness of the Putin regime.

Calling on the world community to cut off Russian gas and oil purchases and to provide military aid to Ukraine, she at last looked up from her notes and gazed at the audience.

“This freedom is worth stepping out of our comfort zone,” she said to her audience.

“We dwell in an interconnected world, and only spreading freedom can make that world safe.”

‘This Horrible War Going on in My Country’ 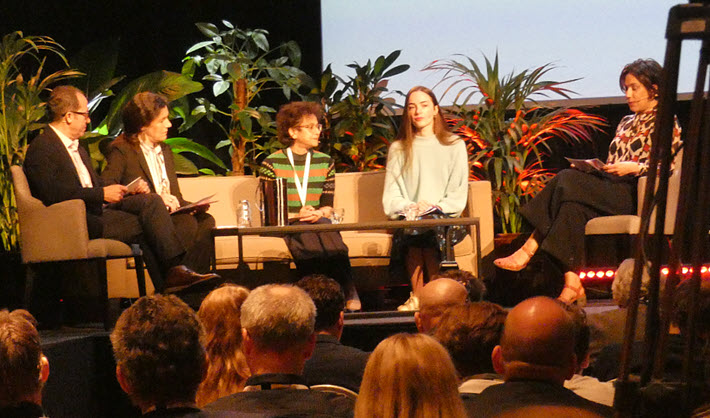 After she spoke, Matviichuk joined the first panel of the day to discuss issues with Turkish author and PEN International president Burhan Sönmez; International Press Institute executive director Barbara Trionfi; and United Nations special rapporteur on freedom of opinion and expression, Irene Khan. Even comfortably seated among the others, Matviichuk never seemed to lose a slightly other-worldly remove from everyone around her. She might have been a hologram, someone there and yet not quite.

This may be a product of the trauma she has experienced, of course, the crushing weight of her message. It may also be something that we project upon her because we see her as a representative victim of so much that’s wrong. There are so many severe crises at play, and a sense, even militarily, of a futility imposed by unthinkable nuclear nightmares. Maybe we’re the dazed ones.

What Matviichuk wanted to put across was something more difficult and demanding than many other comments, some outright blandishments, that would be heard during the course of the inaugural WEXFO.

When she speaks with representatives of various states about the crisis imposed on Ukraine, she said, “I don’t feel an understanding of their responsibility. They say, ‘We are okay. The problem is in Russia.'”

Until it’s understood that “This horrible war going on in my country is a push for the whole world to change the international system of human rights protection,”  Oleksandra Matviichuk said, there will be no change in the fact that the prevailing international community today “has no legal instrument or mechanism to release one single person from captivity.”