‘We’re in a good position,’ says Storytel’s Yasmina Jraissati, after the audiobook service Storytel’s first five years in the region. 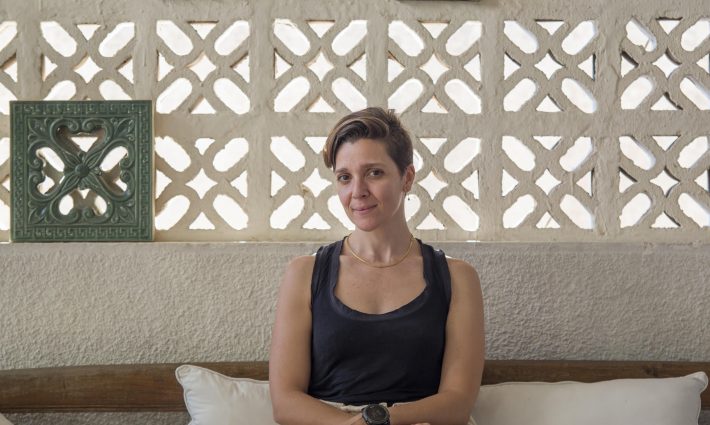 This is a version of a key feature in our special Abu Dhabi International Book Fair 2022 Show Magazine, which is here for your free download (PDF). Having hosted 1,130 exhibitor-publishers from more than 80 countries this year, highlighted by Guest of Honor Germany with a full professional program.

We’ll also add a video highlighting the magazine at the end of this article.

Communicating the Value of the Service

As Abu Dhabi International Book Fair opens its 31st edition, the Stockholm-based international audiobook subscription service Storytel reporting growth in the first quarter of this year, albeit after making as many as 100 layoffs in what’s called “a strategic shift to focus on more mature markets.”

The company’s founding CEO Jonas Tellander departed from daily operations, handing off to Ingrid Bojner as interim CEO. There’s some speculation in world publishing circles that Storytel could be seen as an attractive acquisition, as Katy Hershberger mentions in her report for Publishers Lunch, especially with some softening of the Swedish krona. In January, Storytel completed its acquisition of Audiobooks.com, but overall numbers showed a Q1 jump of 35 percent in Storytel’s worldwide streaming sales.

Publishing Perspectives has been glad to see Stefanie Lamprinidi, Storytel’s international content expansion manager, on the slate of speakers at the International Congress of Arabic Publishing and Creative Industries in the run-up to the Abu Dhabi fair this year.  The company’s roughly 25 world markets now include the United Arab Emirates, Saudi Arabia, Israel, and Egypt.

Having covered Storytel’s progress for many years, we’re glad to have a chance to gather some observations from Yasmina Jraissati, a well-known pioneering literary agent operating from her RAYA in the region and Storytel’s publishing manager for the MENA markets (Middle East and North Africa).

We begin our conversation by recalling that as Storytel entered the Arab world in 2017, the company found itself doing quite a bit of production in order to broaden and deepen the available inventory of Arabic-language audiobook content.

We ask if such “Storytel Originals,’ as they’re branded, are still part of the picture for the company in the Arab world.

Yasmina Jraissati: That’s right. Apart from a few children books publishers who would provide audio CDs with their printed books to their readers, there was virtually no audiobook production in the region at the time.

Today, although things are mostly the same, we can observe a slight shift. Most print publishers still don’t produce audiobooks, but a few of them now see it as an opportunity to increase the size of their audience, and have therefore started to do some production themselves, which they distribute through Storytel, for example. Most of these publishers are in Egypt, some are in the UAE or Saudi Arabia, and they tend to have books that target a very broad audience.

As you say, apart from distributing audiobooks and licensing audio rights, Storytel also creates its own audiobooks, the Originals, including in MENA. Since I joined, toward the end of 2020, we’ve released quite a few Originals and have experimented with different genres and audiences—epic fantasy, dystopia, crime, biographies, for a general audience, and YA. We have more in the pipeline for the coming months. 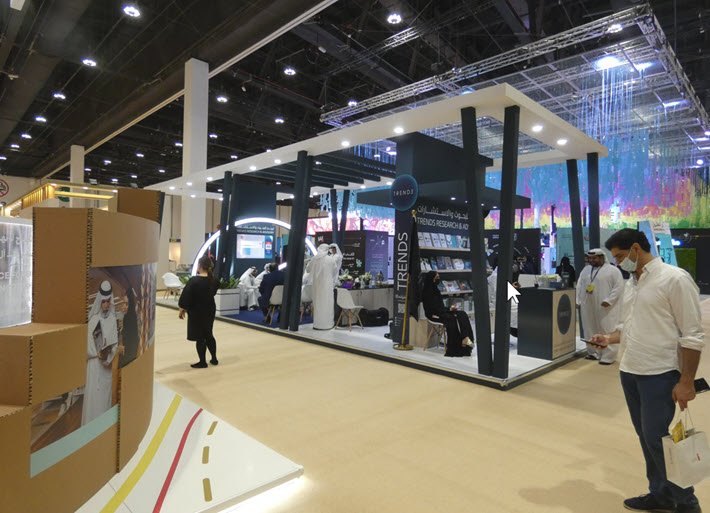 Publishing Perspectives: How do you handle Arabic dialects? Do you tend to opt for the Egyptian “central” dialect or for Modern Standard or for several dialect versions of an audiobook?

Yasmina Jraissati: Most books published in print in the region are in Modern Standard Arabic (MSA), and MSA is the language of modern fiction and nonfiction alike.

In recent years, we’ve observed an increased tendency to write dialogues in dialectal spoken Arabic. This was a big thing when it first started in the print world a couple of decades ago. Today, in Egypt in particular, sometimes even the narrative parts are in Spoken Egyptian. This can be seen in postmodern literary works in which Egyptian slang is mixed with Standard as well as anglicism for example—which provides a lot of texture to the book, and kind of situates the narrative in one or another part of the social landscape. 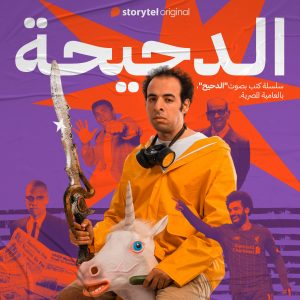 ‘Al Daheeha,’ which has a second season coming in June

To push things farther, some Egyptian books that are nonfiction are also sometimes written entirely in Spoken Arabic. Egypt is so self-sufficient when it comes to publishing, that they can publish books with only the Egyptian market in mind.

So when we adapt a book to the audio format, we are most of the time adapting it from an MSA text. Nonetheless, we try to be as faithful as possible to the author’s intentions, since our mission is to bring it to life in the most convincing way in audio. If the author is Egyptian, we’ll go for an Egyptian narrator. Even if the book is written in MSA, say even if the dialogues were in MSA, there are slight differences in accent to which people are very sensitive.

Importantly, the names of cities and places are very hard to pronounce correctly for someone who is not from the country. We made this mistake a couple of times, where because there was no Spoken Egyptian at all in the book, we thought we could go with a narrator from a different country. 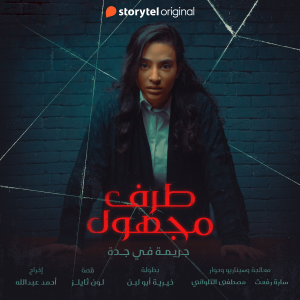 But then, he got the pronunciation of the small unknown towns and areas wrong—as you may know, print books for adults don’t include diacritics, which in Arabic mostly stand for vowels, so it’s pretty complicated to guess what the correct vowel is in a proper name you’ve never heard before.

This means we work with voice talents from across the MENA region, but they tend to belong to mostly three families: Egypt, Levant—Syria or Lebanon to be precise—and Gulf, or Saudi more specifically.

I think the question here would perhaps rather be: What do listeners prefer? I won’t get into that since it’s a complicated one to answer. But one thing we do know is that for example, even Saudi (i.e. non-Egyptian) listeners enjoy listening to an Egyptian book by an Egyptian narrator. And they particularly love it when the dialogues are in Egyptian.

It makes them feel connected to the place. Accents and dialects are certainly a challenge in Arabic audiobook publishing, but I also think they can be a great opportunity.

Publishing Perspectives: Since Storytel acquired the Kitab Sawti library, has its material been a good source for Storytel? And are Sebastian Bond and his co-founder involved now with Storytel?

Yasmina Jraissati: Storytel acquired Kitab Sawti in the summer of 2020, along with its library. And yes, definitely, Kitab Sawti’s library represents a precious asset. Sebastian Bond is currently the MENA bub manager, and Anton Pollak, co-founder of Kitab Sawti, is tech manager. 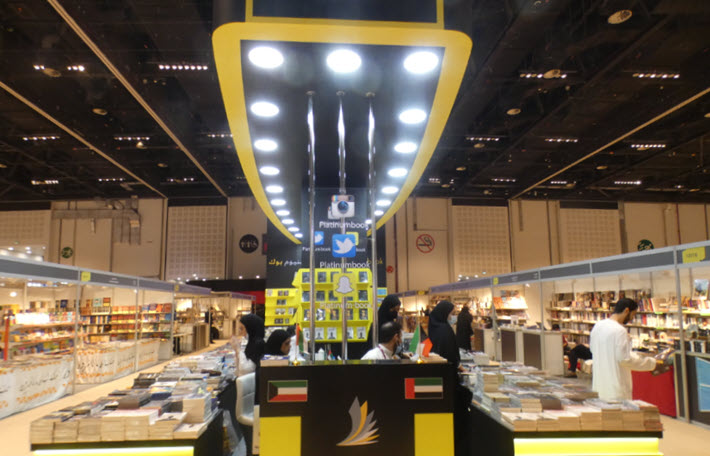 Audiobook Reception in the Arab World

Publishing Perspectives: Overall, how does the reception of audio seem to be going in the Arab world? Are subscriptions growing at the rate Jonas Tellander—who recently was succeeded by Ingrid Bojner—had hoped?

Yasmina Jraissati: There’s no doubt that we’re an emerging, still immature market. Most people in our target audience group still don’t know what audiobooks are. To illustrate this, the head of Arabic at a school in the UAE once told me, “Oh, so you’re like the radio.” … Well, yes, I can definitely see where he’s coming from, and in a sense we are. But in another sense, we are nothing like the radio.

For example, the experience of watching Netflix today, versus the previous experience of watching television when there were five state-owned channels is quite different, I would say. It’s the same for audio. People’s lives have changed and as a result their time constraints, expectations, and needs have changed. Some people find this out on their own, and they embrace Storytel. Others already experience it, but they’re not yet aware of the possible answers to their needs and expectations.

We’re definitely growing at a good pace and are very optimistic about the future. We are in a good position, and there’s still so much more we can do.

Publishing Perspectives: What are the main challenges for audio work of this kind in the region? Various parts of the world can be so different in how they receive and respond to audio.

Yasmina Jraissati: I believe one important challenge has to do with understanding the value of our service. We know that people are listening to audiobooks: the need is there. But many people turn to the pirate industry instead of paying for a subscription—even though it’s much less practical and the quality is catastrophic.

Today, all users don’t actually know that listening to a book on YouTube is piracy. There’s a low awareness level about how piracy damages the industry and ultimately impacts the readers and listeners.

But I believe this will change. The parallel to music sheds an interesting light. I remember back in the early 2000s, when music took the digital turn and everyone downloaded it free from different sites. At first it was exhilarating: So many songs we never could have dreamt of having access to. But soon, this became very cumbersome. It was an utterly time-consuming experience for the consumer, and not sustainable for the industry.

Then, various authorities started cracking down on illegal downloading and at the same time streaming services took their place. And that was the real digital revolution within music.

This scenario is what’s needed for audiobooks in MENA. Storytel has an important role in that transition, providing a high-quality service and showing people there’s a more sustainable way to consume audiobooks than piracy.

The way I see it, illegal downloading means there’s a need for audiobooks in the market, and more potential readers and listeners than we might think.