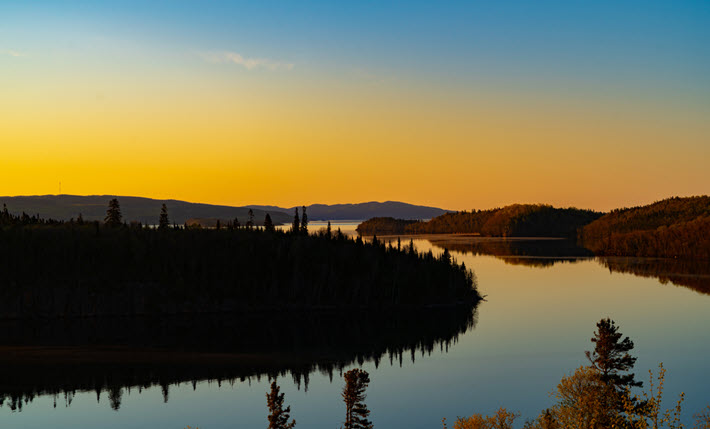 Today is National Indigenous Peoples Day in Canada (June 21), and from Ottawa, the nation’s governor general, Mary May Simon—who spoke very movingly in October at the opening ceremony of Frankfurter Buchmesse—has issued a statement. 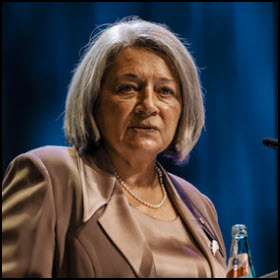 In it, she says, in part, “As an Inuk woman, I am proud that Indigenous peoples are telling their stories.

“The recent findings of unmarked graves in many communities made us all pause to consider the impact of residential schools. But through the pain, I have seen Canadians from coast to coast to coast open their hearts and minds because they want to be part of reconciliation and the healing process.”

In the language of the Canadian government, National Indigenous Peoples Day is “a day for all Canadians to recognize and celebrate the unique heritage, diverse cultures, and outstanding contributions of First Nations, Inuit and Métis peoples. The Canadian Constitution recognizes these three groups as Aboriginal peoples, also known as Indigenous peoples.”

BookNet’s discussion, using data from its own BiblioShare and SalesData operations, begins with a list of BISAC codes by which North American books can be classified for their relationship to topics related to Indigenous matters. Here’s that list:

The BookNet assessment points out that while these classifications are intended for market players—publishers, booksellers, distributors—to use in meaningfully designating and surfacing such work for those who may search for it, “For better or for worse, they become part of a title’s archival representation and the groupings are a powerful research tool—something we will be leveraging later on. As a result, classifying titles by Indigenous contributors and about Indigenous topics can be complicated.”

In explaining this, BookNet’s Zara writes, “Titles written by Indigenous contributors are not—and should not—only be categorized under Indigenous-focused subject categories. Likewise, non-Indigenous contributors are also writing on Indigenous-related topics and have titles categorized under these Indigenous-focused subjects. Within BISAC itself, it’s also difficult to identify specific Indigenous nations. Some subjects are grouped as ‘Indigenous Peoples of the Americas,’ while others have been split into Canadian ‘Indigenous’ and American ‘Native American.’ It’s also unclear whether all ‘Canadian’ Indigenous works are classified under the Canadian-focused codes.”

Helpfully placing those considerations on the table, then, BookNet presents three brief sets of data points. 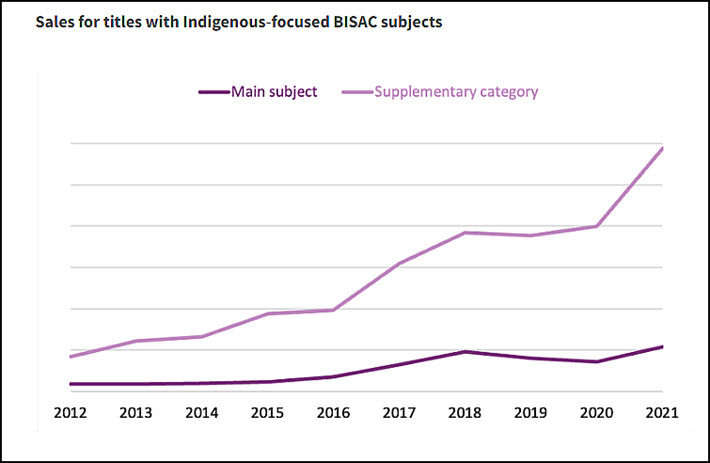 BookNet’s observations show more than 10,000 ISBNs with Indigenous-focused BISAC codes in the Canadian book market. Of those:

The most popular categories for titles with Indigenous-focused main subjects:

The most popular subjects among Indigenous-focused supplementary categories:

#GGSimon encourages all Canadians to take part in #NationalIndigenousPeoplesDay by learning more about Indigenous communities and by providing safe spaces for their stories.

BookNet then runs down data gathered from the patterns of 50 Indigenous publishers with inventory and sales history in SalesData. Those sales, the agency says, have grown 1,083 percent in 10 years. The numbers are put together from 2,000 ISBNs in 40 BISAC headings and with more than 300 BISAC subject codes.

The study finds that only 27 percent of these 2,000 titles actually use Indigenous-focused BISAC codes.

Those codes most commonly used:

Among other codes used by Indigenous publishers, the most popular:

Within those heading codes, the most popular subject categories:

BookNet’s team reports that it sees interest rising in Indigenous-related content. According to BookNet’s Canadian Book Consumer Study 2021, in the second half of 2021:

The readership of these titles also seems to be increasing, BookNet reports. In its Canadian Leisure and Reading Study 2021, the agency found that 19 percent of Canadian readers “had read books by or about Black, Indigenous, or people of color, up from 9 percent in 2020.”

You can learn more about Canada’s National Indigenous Peoples Day—part of a month of activity—here. Today’s date, June 21, was chosen and originally called National Aboriginal Day because, as the site puts it, “For generations, many Indigenous peoples and communities have celebrated their culture and heritage on or near this day due to the significance of the summer solstice as the longest day of the year.”

More from Publishing Perspectives on BookNet Canada and its research is here. More from us on the Canadian market is here, more on Frankfurter Buchmesse is here, and more on issues in diversity and inclusivity is here.