Productions are underway, expanding the Dr. Seuss Enterprises partnership with Netflix for new animated projects for a preschool audience. 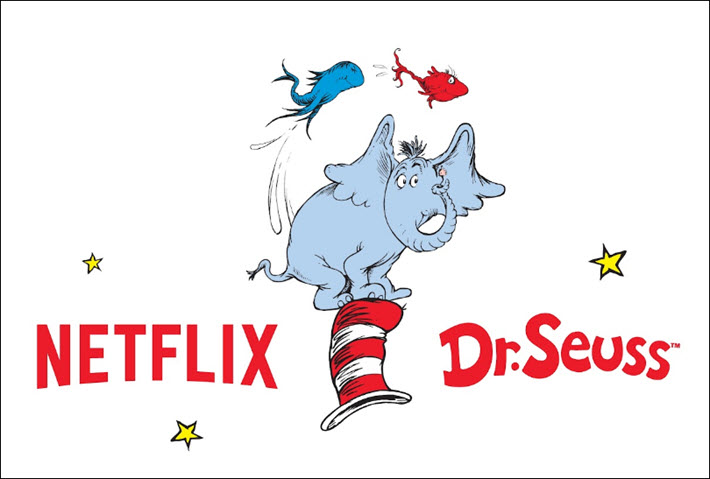 Five Productions in the Works

Dr. Seuss Enterprises and Netflix are in development on five Seuss titles, planned for preschool-audience animated series and specials.

In an interesting parallel, Kristen McLean at NPD has reported in the last week on the boosted-sales effect of books you might think were banned into obscurity.

As we reported last spring, Seuss Enterprises in March 2021 announced that it would cease publication of six lesser-known Dr. Seuss books because they “portray people in ways that are hurtful and wrong,” per the estate. “Ceasing sales of these books is only part of our commitment and our broader plan to ensure Dr. Seuss Enterprises’ catalogue represents and supports all communities and families,” the estate wrote.

As McLean notes, the statement went out during Dr. Seuss Week, which coincides with Theodor Geisel’s birthday on March 2. “The news had a significant effect on the sales volume for Dr. Seuss titles,” McLean reports, “as consumers reacted to a perceived ‘cancellation’ of Dr. Seuss generally.

“The net effect was a major boost for juvenile fiction across the entire month of March, which sold more than 10 million additional units, compared to February 2021.”

And in an age of book bannings, it will be interesting to see what sort of market impact the new animated Seuss cinematic and television work might have.

Executive producer Dustin Ferrer (Esme & Roy, Shimmer & Shine, Daniel Tiger’s Neighborhood) is to be showrunner across all five productions, and additional showrunners are expected to be announced in coming weeks.  This suite of productions expands the partnership between Netflix and Dr. Seuss Enterprises beyond the launch of the animated series Green Eggs and Ham in 2019, the second season of which was released in April.

The new Dr. Seuss line-up is to anchor Netflix’s expanded focus on preschool, the estate says. “Introducing concepts of foundational learning, this new slate of programming will explore themes of diversity and respect for others,” the company says, clearly looking to counter the less felicitous impressions left when it took those six titles out of circulation.

In a prepared statement, Heather Tilert, director of preschool content for Netflix, is quoted, saying, “Netflix is a trusted home for characters kids love, and generations of kids love the characters imagined by Dr. Seuss. These beloved stories have been a core part of families’ libraries for many years and it gives me great pride that we’re bringing them to  our catalog of Netflix shows, in a fresh and modern way that resonates with audiences today.”

“We’re always looking for new and engaging ways to share our stories, characters and messages with the next generation of fans, and Netflix has a unique ability to create original, delightful adaptations of our timeless classics with an emphasis on imagination, fun, and education. Our partnership has been very prosperous thus far with our award-winning animated series Green Eggs and Ham. We hope to continue that success with our upcoming projects.”