As many as 450 Spanish works may be published in translation by the October 19 to 23 run of Frankfurter Buchmesse this year. 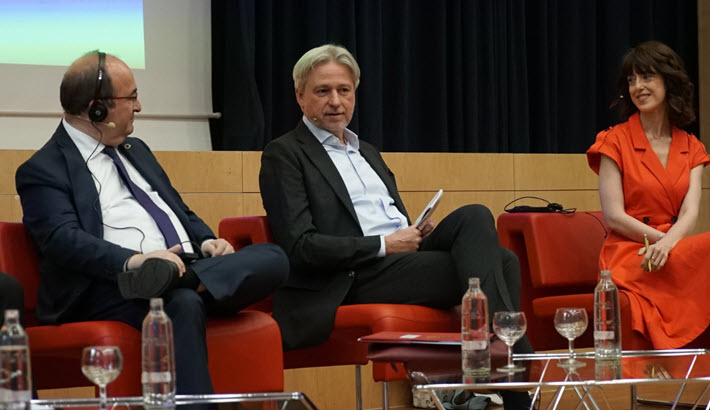 At the news conference at the Goethe-Institut Madrid on Frankfurter Buchmesse’s Guest of Honor Spain program are, from left, Miquel Iceta, Spain’s minister of culture and sport; Juergen Boos, president and CEO of Frankfurt Book Fair; and Irene Vallejo, author of ‘Infinity in a Reed’ who will take part in Frankfurt’s October 18 opening ceremony. Image: SpainFrankfurt 2022

Now in the run-up to its turn this year at Frankfurter Buchmesse (October 19 to 23), the upcoming Guest of Honor Spain program was presented in an introductory news conference in Madrid on Thursday (June 9), an led by Miquel Iceta, Spain’s minister of culture and sport.

The general director of Spain’s books and reading promotion program, María Jose Gálvez; the president of Acción Cultural Española, José Andrés Torres Mora; and the minister counselor of the German embassy in Spain, Christoph Wolfrum, were also present at the event.

Preparatory materials are emphasizing that this is a case in which a guest of honor at Frankfurt is a return: Spain held this position in 1991 at Buchmesse, and characterizes its concept 31 years later as a chance to stage for the world’s largest book publishing trade show a “revitalization process” both of the Spanish cultural scene and what organizers term “our commitment to innovation.” Spanish creativity, as media messaging has it, “goes beyond territories, borders, continents, cultures, languages, age, or gender.”

The top-line note coming from Madrid’s press conference aisre that the Spanish program is expected to travel with almost 200 participants from Spain, including writers, translators, illustrators, publishers, literary agents, booksellers, and distributors.

They’re to be led by the classicist Irene Vallejo (Infinity in a Reed, which has been translated into more than 30 languages) and novelist Antonio Muñoz Molina, the 2013 recipient of both the Jerusalem Prize and Prince of Asturias Award. Both authors are expected to appear at the opening ceremony of Frankfurt Book Fair on October 18.

By the end of Frankfurt week, Manuel Rivas, the Galician writer, journalist, and poet, will be onstage for the handover of the “Guest Scroll” to Slovenia, the 2023 Buchmesse guest of honor nation.

Three-quarters of the authors headed for Frankfurt write in Spanish, the remainder working in one or more of the country’s other official languages—Catalan, Galician, and Aranese. 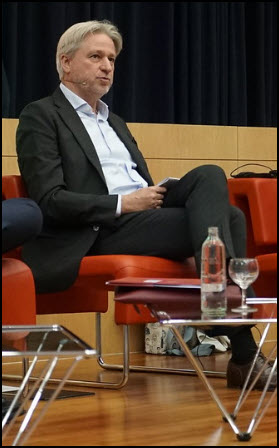 Welcoming the upcoming program and its ancillary projects, Frankfurt’s Boos said, “I’m looking forward to a guest of honor program that reflects the multilingual and vibrant literature and culture of Spain today and offers the book fair audience a contemporary approach to “Creatividad desbordante.”

“Trade fair visitors will be able to discover the diverse Spanish publishing landscape in October.

“In addition to the large publishing houses, many small and medium-sized publishers, including many children’s book publishers, will also present their programs in Frankfurt. Visitors will also discover the stands of the Comunidades Autonomas of Catalonia, Valencia, Euskadi, Galicia, Andalusia, and Asturias.”

The program, as we’ve written previously, is also expected to have a strong diversity component. Organizers describe this as an emphasis on “bibliodiversity, linguistic diversity, gender equality, the strength of the sector, innovation, digitization, and sustainability.” This is emphasized in material from the organizers that says a key goal of the program is to reiterate the state’s “commitment to the strength of the Spanish language, the richness of multilingualism, and the diversity of authors, genres, and publishers in the sector as the cornerstones of the activities framed in the Road to Frankfurt and our participation in the 2022 Fair, as well as in the initiatives joint initiatives with the book sector and the Autonomous Communities.”

The slogan for the project, Creatividad desbordante, most frequently translated as “spilling creativity,” is also being seen at times translated as “overflowing creativity,” the implication being an abundance of creativity and an exuberance in communicating that. And translation, the rights trade, and its potential for Spanish literature.

The guest of honor project at Frankfurt began for Spain with its agreement with Buchmesse in 2019.  At that point, the ministry of culture and sport increased its budget for translation grants by almost 45 percent. 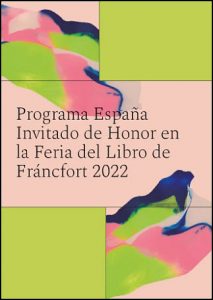 Between those moves in 2019 and the end of 2021, both grants have contributed almost €2.5 million to promote the internationalization of Spanish literature in the five previously mentioned markets.

Organizers report that in those three years, translations totaled 300 tittles, and in 2022 another 110 translations are set to be published. Most of these are narrative works, but there are also works of poetry, young readers’ literature, graphic novels, and nonfiction.

Of those 110 new titles, 50 percent have received some form of translation support.

Iceto: ‘To Boost the Internationalization of Our Authors’

In his comments at the Madrid event, the ministry of culture’s Iceto highlighted the importance of Buchmesse, both in terms of  the close cultural ties that exist between Spain and Germany and in terms of the exposure for Spanish literature made possible by a guest of honor program at the fair and the spur that creates to generate translation activity for a market’s literature.

As Iceta confirmed, in 2019 it was anticipated that around 350 books by Spanish authors would be translated into German by the time of the fair, but that figure now has risen to more than 450 translated books—overall, with 40 percent of them assisted if not fully enabled by grant assistance.

“Being guest of honor at the Frankfurt Book Fair,” Iceto told the Spanish press, “will allow Spain to boost the internationalization of our authors and the book industry.

“I’m convinced that our presence in Frankfurt is going to be a milestone in the cultural renaissance we are going to experience after two years of pandemic,” he assured. 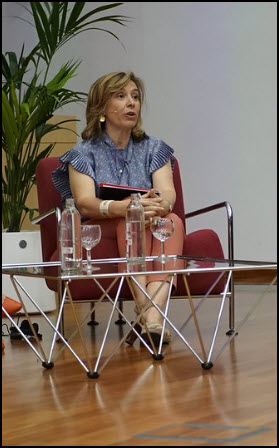 Marco, familiar now to Publishing Perspectives readers, has been in charge of presenting the Spanish literary and professional program from its inception, and on Thursday in Madrid told the press, “It’s the moment to show the results of four years of work.

“We’re presenting ourselves with the fulfilled objective of promoting the translation of our authors and the internationalization of the publishing sector, with more than 150 launches in Germany in 2022.”

Fernández, president of the publishers’ guild federation, said that Guest of Honor Spain at Frankfurt “will allow us to showcase the strength of Spanish creation and publishing internationally. We’re a country that stands out for its rich publishing production, both in Spanish and in the rest of the languages of the state, and the program is a reflection of this.”

He added that returning as guest of honor after 31 years allows Spain to show the changes in the culture over three decades. The 1991 program “reflected the fact that our country had rejoined Europe,” he said, while today, the focus can be more on “the great publishing potential confirmed” by Spain’s growing presence in world literature.

Perhaps the most enthusiastic of speakers on Thursday was the author Irene Vallejo, who eagerly announced her participation on social media.

“We have reason for hope,” she said. “We universally agree that reading is a healthy and recommendable activity.

“It paves the way for us to know and read each other without frontiers.”

And an event such as Frankfurt, Vallejo said, is “an invitation to be more cosmopolitan.” 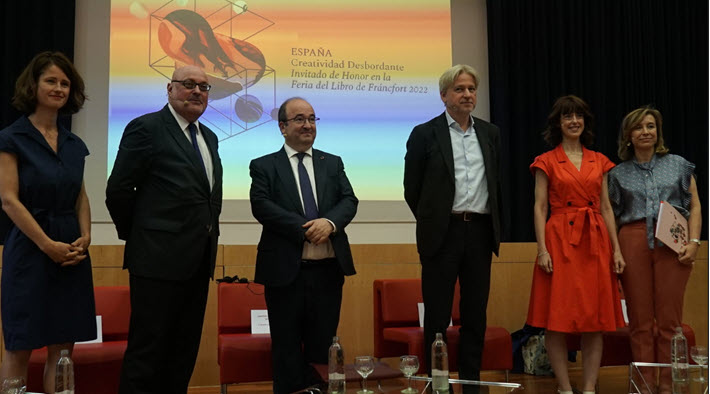