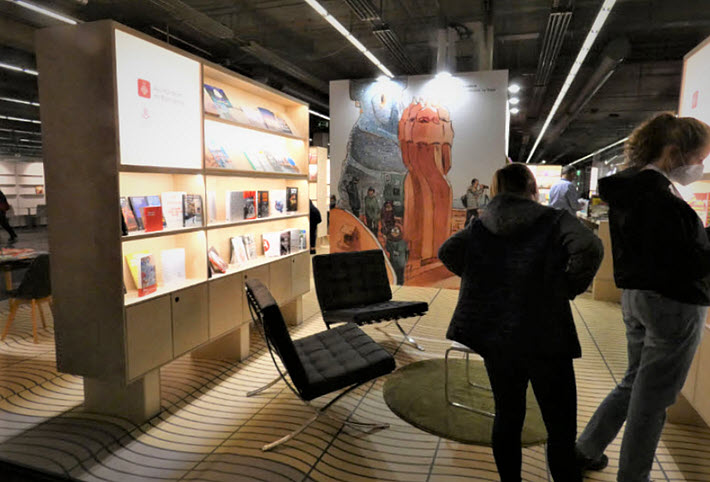 The Barcelona City Council stand at Frankfurter Buchmesse 2021. Spain is the 2022 guest of honor at the trade show in October. Image: Publishing Perspectives, Porter Anderson

Relative to Frankfurt Audio: See our report today from the Audio Publishers Association

In a kick-off announcement to the international news media today (June 7), Frankfurter Buchmesse is outlining plans for its 74th iteration, running October 19 to 23.

With its theme of Translate, Transfer, Transform., the world’s largest international publishing trade show anticipates more than 4,000 exhibitors from more at least 65 nations. And the focus on translation—which lies at the heart of book business trade shows, of course—is timely for the industry’s newly focused emphasis on how translators are credited and paid in the world book business.

Currently, exhibitors say they see Guest of Honor Spain especially well represented, along with strong exhibitor cohorts coming from the United States, United Kingdom, Italy, and France. Space in Messe Frankfurt’s Hall 3, annually the hub of the German publishers’ stands, is reported to be nearly sold out. Exhibitor registration remains open at this point.

Frankfurt’s administration expects to use Halls 3, 4, and 6 this year, along with the Forum and, of course, the huge open-air Agora at the fairgrounds’ center. Frankfurt Wednesday, Thursday, and Friday are trade visitor days, with the public joining in on Friday, Saturday, and Sunday. 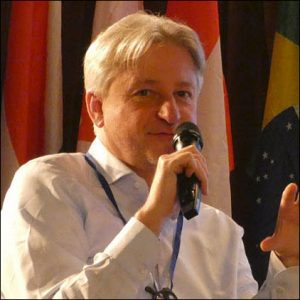 “After two years of the pandemic, there’s considerable desire for in-person meetings and exchanges with other publishing professionals. I’m therefore especially pleased that agencies from some 25 countries have already registered for the Literary Agents and Scouts Centre [LitAg]—including an especially large number from the most important markets, the United Kingdom and United States.

“The translation rights business has traditionally been the fair’s main activity,” he says. “That’s why this year, we’re highlighting the subject of translating with the campaign Translate. Transfer. Transform. After all, it’s only because of translators and their efforts that we’re able to understand the literature of other languages and cultures, thereby gaining new perspectives and creating closer connections.”

In its emphasis this year on translation, the trade show refers not only to the translation of texts into other languages, but also, in a larger sense, to the adaptation of literary material into other media. A number of events are planned, including a stage dedicated to the topic of translation, which is being organized by the association of German-speaking translators (VdÜ), in cooperation with Frankfurter Buchmesse, Weltlesebühne e.V. and other partners.

‘Against Discrimination of Any Kind’ 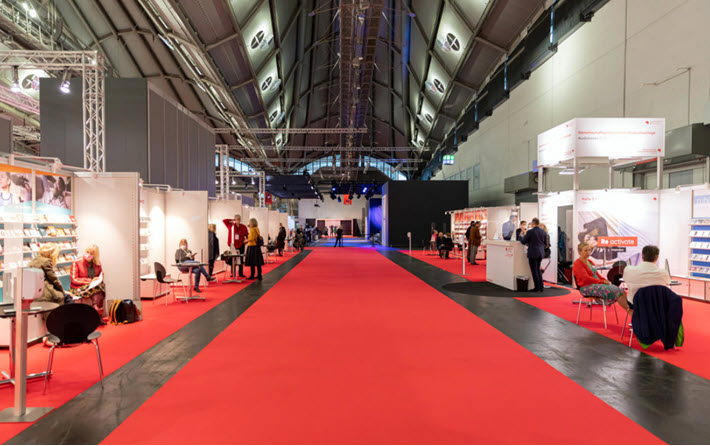 Inside Hall 3 at the 2021 Frankfurter Buchmesse. Specially spaced floorplans are anticipated again this year at Messe Frankfurt, once COVID-19 precautions are designed for the trade show’s October 19 to 23 dates. Image: FBM, Zino Peterek

Also in step with the tenor of difficult times on many world publishing markets, Boos is stressing the egalitarian and inclusive framework in which Frankfurt sees its mission.

“As a meeting place for people from more than 100 countries,” he says, “Frankfurter Buchmesse thrives on the diversity of its exhibitors and visitors. Basic democratic principles are the DNA of Frankfurter Buchmesse; the fair stands for a diverse society, for plurality and against discrimination of any kind.

“We’re currently developing a range of focus topics, formats, and measures to make these fundamental values visible. We want to focus on democratic principles, highlighting different literary groups at the fair and celebrating the book industry’s diversity. In view of the current political situation, one aspect that is of particular importance to us this year is offering Ukrainian publishers and authors a platform.”

In line with those goals, our colleagues in Frankfurt are working with partners including the German Federal Agency for Civic Education, the Association for Anti-Discrimination and Educational Work, the Democracy Centre Hessen, and HKE, the state of Hessen’s center for combatting extremism. 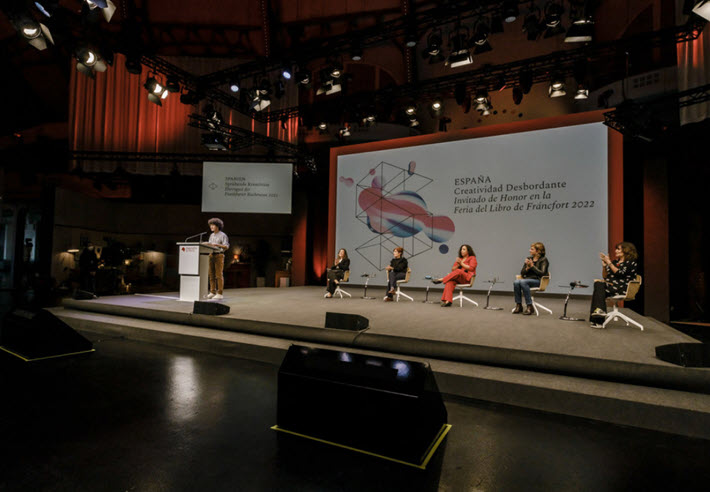 A presentation from Frankfurter Buchmesse’s 2022 Guest of Honor Spain during the close of the 2021 trade show. Image: FBM, Marc Jacquemin

Translated “spilling creativity,” as in an abundance of innovative talent, that slogan Creatividad Desbordante describes the dynamic behind the Spanish guest of honor program being planned for the 2022 Frankfurt will be centered in a specially designed pavilion  on Level 1 of the Forum, directly across the Agora from Hall 4.

Several of Spain’s Comunidades Autónomas (autonomous communities)–such as Galicia, Catalonia, and the Basque Country–will have their own stands at the fair.

The hashtag #tapasliterarias, meaning “literary titbits,” is being used on Instagram to raise in interest in literature from Spain.

Buchmesse staffers as well as publishers, authors, translators, and editors are highlighting some of the roughly 150 new titles expected to be published in German in conjunction with Spain’s appearance as guest of honor.

Emphases: Audio and Media for Children and Young Adults 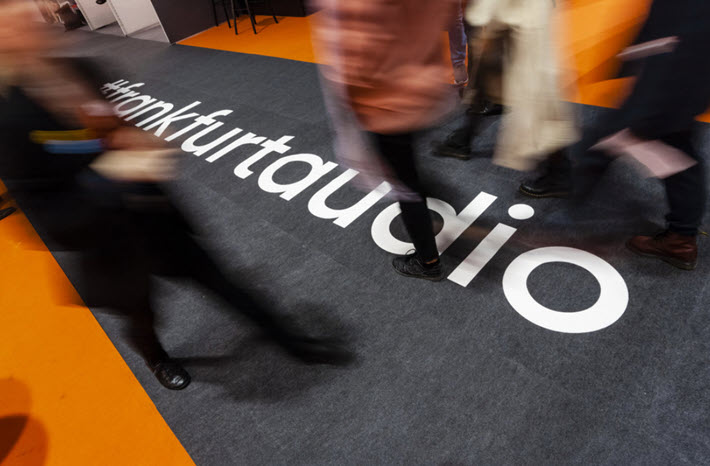 At the Frankfurt Audio area in 2019. The specialized section in Hall 3.1 returns this year to Frankfurter Buchmesse. Image: FBM, Marc Jacquemin

Frankfurt Audio will again this year be a specialized area of concentration in Hall 3.1, focusing on the spoken word. The intent there is to highlight audiobooks, podcasts, audio technologies, and vendors’ services in the field. (Today, see our story on new research into audio in the American market from the Audio Publishers Association.)

In addition, an area dedicated to exhibitors specializing in media for children and young adults is to include the German Children’s Literature Award on Frankfurt Friday (October 21), and is expected to find strong interest from the fair’s public visitors on the weekend. 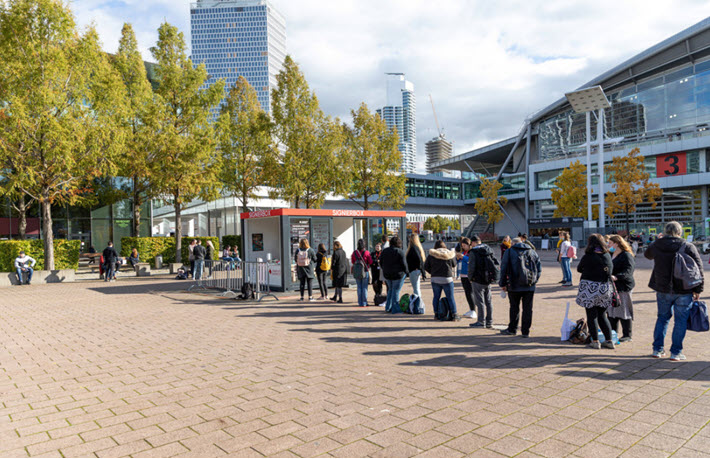 Readers queue up for an autograph from author Ursula Poznanski at the 2021 Frankfurter Buchmesse at a Signing Box in the Agora. Image: FBM, Zino Peterek

In addition to the trade show’s programming on the ground for visitors in Frankfurt, there are online offerings including a return from last year of the show’s Master Classes, running October 10 to 14, the week prior to Buchmesse.

There’s also to be a return of the The Hof, as a digital after-fair meeting point, named for the Frankfurter Hof, of course.

Frankfurt Studio, the television production unit in Hall 4, is to return this year, with live-audience capability as well as video playback at times. Exhibitors can book slots in the ground-floor facility (the site of the former Business Club). Starting on Frankfurt Wednesday, industry topics will be featured, with authors and their books becoming the mainstay on the weekend. There’s more about this and other event options here.

Again, the Agora will have signing boxes, where authors can meet their readers seeking autographs.

BookFest returns with its Buchmesse-themed events at various venues in and around the city of Frankfurt. And on Frankfurt Sunday, the 23rd, the German Cosplay Championships are anticipated at Messe Frankfurt, always a colorful, friendly invasion of costumed youngsters.

While it’s too early to formulate the precautions and regulations to be used in October, Gabi Rauch-Kneer, vice-president of exhibition management at Frankfurt, is quoted in today’s media messaging, stressing the importance of safety in the still-ongoing coronavirus pandemic. As it did last year, the fair is working with Frankfurt’s public health authorities to produce a hygiene and safety plan for the show. Distancing is a factor being incorporated again this year into floorplans, as was the case in 2021.

Online ticketing for the show should begin in mid-August. 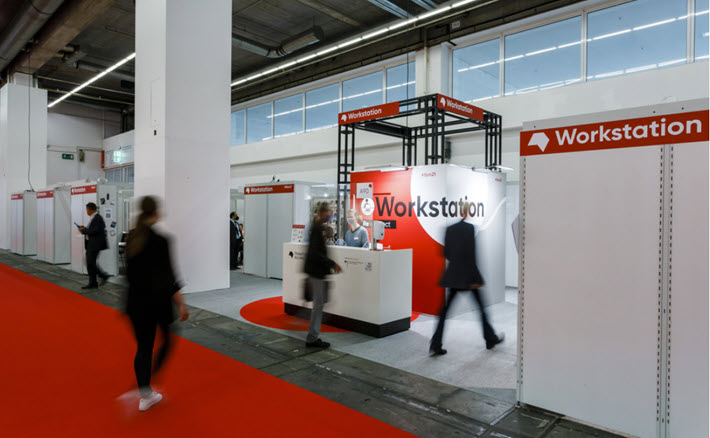 More on Frankfurter Buchmesse is here, more on world publishing’s book fairs and trade shows is here, and more from Publishing Perspectives on the German market is here.